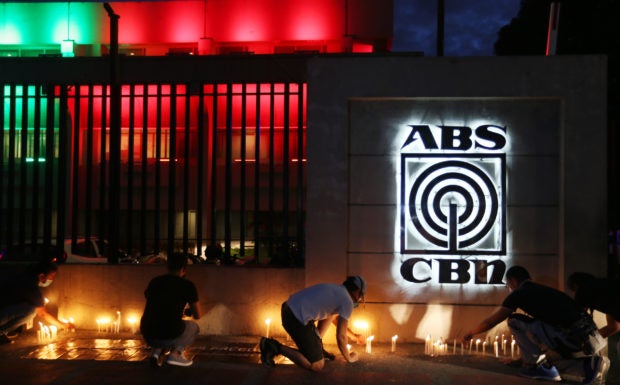 ‘KEEP US IN YOUR THOUGHTS’ ABS-CBN employees light candles in solidarity as the network’s darkest hour came on Tuesday night. —EDWIN BACASMAS

MANILA, Philippines — ABS-CBN shut down on Tuesday evening its radio and television operations nationwide in compliance with an order from the National Telecommunications Commission (NTC), which had turned its back on a commitment it made to Congress that it would give a provisional license to the broadcast giant.

The NTC issued a cease-and-desist order (CDO) to the network earlier on Tuesday, a day after the network’s 25-year franchise had expired.

The network went off the air at 7:52 p.m., at the close of its flagship news program, “TV Patrol.”

It was the first time ABS-CBN was forced by the government to shut down since it was padlocked in September 1972 when dictator Ferdinand Marcos imposed martial law.

In March, NTC Commissioner Gamaliel Cordoba assured members of the House of Representatives that the agency would heed the advice of the Department of Justice to allow ABS-CBN to operate while its franchise renewal was pending in Congress.

But on Sunday, Solicitor General Jose Calida, who earlier filed a quo warranto petition against ABS-CBN to have the network’s franchise revoked, warned the NTC against granting a provisional authority to the broadcaster.

Cabarios denied that the NTC was pressured by Calida.

He explained that the issue was “the validity of the franchise” and that its legal team had “deemed it proper to issue a CDO” despite Justice Secretary Menardo Guevarra’s position that broadcast entities could continue operating while their franchise renewals were pending in Congress.

He cited Republic Act No. 3846, or the Radio Control Law that was last amended in the 1950s, which said “no person, firm, company, association or corporation shall construct, install, establish, or operate a radio station within the Philippine Islands without having first obtained a franchise therefor from the Philippine Legislature.”

Despite its diversification into high-speed broadband, theme parks as well as international and digital productions, ABS-CBN still relies on advertising from its TV business for about half of its revenues, which hit P40 billion in 2018.

Prior to signing off, network executives thanked the public and its 11,000 employees.

“At the start of the enhanced community quarantine, many of you continued to go to work, to maintain our broadcast,” Carlo Katigbak, president and CEO of ABS-CBN, told company employees.

He said the network “has done everything and has not violated any laws,” in having its franchise renewed and Congress had acknowledged its importance.

“If we have been important to you, keep us in your thoughts, in honor of all our employees,” Katigbak said.

Company chair Mark Lopez said it was painful to go off the air, but the company was not losing hope.

“Help us continue to pray, so that ABS-CBN can go back on air, and continue to serve,” he said.

“We will not be silenced despite this attack on our democracy and press freedom. In the face of this challenge facing our company and livelihood, we will not turn our backs on you. We, you, are ABS-CBN,” De Castro said in Filipino.

The moves by the NTC and Calida came amid the new coronavirus pandemic that had shuttered most of the economy and regular government functions.

It followed President Rodrigo Duterte’s threat to shut the network down over a feud with its owners that supposedly began when the TV network failed to air his advertisements during the 2016 election campaign.

ABS-CBN could challenge the NTC order at the Supreme Court, which could issue a temporary restraining order, he said.

“The Supreme Court itself has said provisional authority can be authorized to be issued where the application for the renewal of the franchise is pending,” said Drilon, a former justice secretary.

At the House of Representatives, Palawan Rep. Franz Alvarez, the head of the committee on franchises, said there was no basis for the NTC to shut ABS-CBN.

“If the NTC chooses to succumb to the pressure of the solicitor general and disregard the commitments they gave under oath, we reserve the right to call them before Congress and explain why they should not be held in contempt,” he warned.

Calida on Sunday issued a statement saying there was no legal basis for the NTC to authorize ABS-CBN to keep broadcasting with an expired license. He warned the commissioners that they could be prosecuted if they did.

Detained Sen. Leila de Lima in a statement said Calida should be disbarred for threatening to sue NTC officials and “for publicly going against (his) clients.”

The NTC’s order against the network contradicts the resolution separately adopted by both chambers of Congress, which authorized the NTC to let ABS-CBN operate pending the approval of its franchise extension, according to Sen. Sonny Angara.

“I want to express my reservations regarding this because at a time of (a health crisis), people need to be informed by reliable sources,” Angara said. “It’s really disappointing.”

Sen. Risa Hontiveros said the country needed “more, not fewer voices of a free and responsible media especially in this time of pandemic when our countrymen need right and complete information.”

“This is foolishness,” he said.

Laguna Rep. Sol Aragones, the author of one of the 11 ABS-CBN franchise renewal bills and a former reporter for the network, said she was dismayed and shocked by the NTC’s order.

“I was expecting them to issue provisional authority to ABS-CBN so it could continue airing while the committee on franchises was hearing the application,” she said.

The National Union of Journalists of the Philippines (NUJP) said that the shutdown came just two days after World Press Freedom Day.

“All this stems from President Rodrigo Duterte’s personal vendetta against the network, whose franchise renewal he pledged to block. It sends a clear message: What Duterte wants, Duterte gets. And it is clear, with this brazen move to shut down ABS-CBN, that he intends to silence the critical media and intimidate everyone else into submission,” NUJP chair Nonoy Espina said in a statement.

Human rights group Karapatan said the NTC move was a “blatant attack on press freedom” and “truly abhorrent” as it came during a public health crisis.

“Amid the government’s militarist response to the pandemic, repeated threats of declaring martial law, the rapid shrinking of civic spaces in the country, and an intensified crackdown on dissent, the grave repercussions of the threats against ABS-CBN cannot be ignored. The Duterte regime is desperately fast-tracking its Marcosian delusions of a fascist dictatorship,” it said.

Presidential spokesperson Harry Roque said Duterte had accepted an apology from the network regarding the non-airing of his election campaign propaganda and had “left its fate to both houses of Congress.”

Cabarios said in an interview with the Inquirer that the agency’s move to shut down a television network due to a lack of a franchise was unprecedented.

“As far as I can recall, this is the first time,” said Cabarios, who has spent almost four decades at the NTC. “Usually, we issue a CDO for violating the NTC’s rules.”