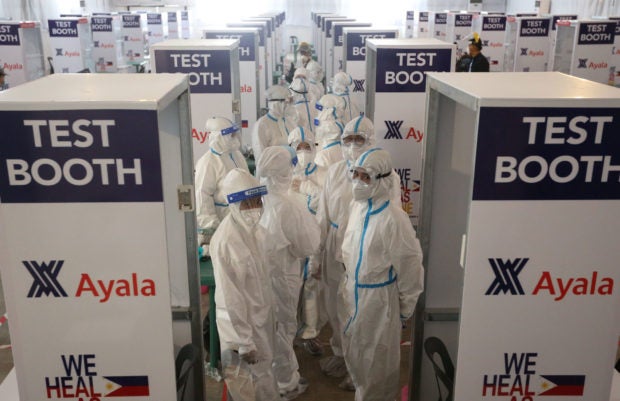 SWABBING CENTER Female coast guards in full protective gear on Tuesday prepare to man 66 testing booths at Palacio de Maynila, an events venue on Roxas Boulevard that has been converted into a temporary swabbing center to expand the government’s testing capacity for the new coronavirus. The Department of Health aims to conduct 30,000 tests a day by the end of May. —MARIANNE BERMUDEZ

MANILA, Philippines — Despite limited testing and problems involving tests for the new coronavirus in the Philippines, an epidemiologist who serves in the Inter-Agency Task Force on Emerging Infectious Diseases said on Tuesday the country had already flattened the epidemic curve nearly two months after the government placed the nation on lockdown.

Dr. John Wong said that while the data he had was a picture of the coronavirus situation in the country from 10 to 14 days ago, it showed that “the curve has already flattened.” He noted that one of the indicators for saying so was the longer time it now took for the number of cases and deaths to double.

A reduction in coronavirus deaths was also observed across the country. From four days, the average time for the number of deaths to double is now 5.7 days nationwide. Except for Metro Manila, all geographic areas have recorded a mortality doubling time of at least seven days.

“This is a picture [of the COVID-19 situation in the country] about 10 days back. We already saw that 10 days ago, there was already an improvement in both cases and mortality,” said Wong, founder of the health research institution Epimetrics Inc. and a member of the task force’s subtechnical working group on data analytics.

“We already saw that the curve had already flattened. If there’s no significant changes, the flattening will continue, meaning, we will have very few additional cases,” he added.

According to Johns Hopkins University, a country is flattening the curve when it is able to “reduce the number of new COVID-19 cases from one day to the next.”

“This helps prevent health-care systems from becoming overwhelmed. When a country has fewer new COVID-19 cases emerging today than it did on a previous day, that’s a sign that the country is flattening the curve,” it said.

Asked if this meant that the Philippines had already reached its peak number of cases, Wong said it was “difficult to predict when the peak will be and how many cases we’ll have at the peak.”

“There are several models going around, but they are [presenting] different numbers. I don’t want to speculate whether we have reached the peak,” he told reporters in an online press briefing.

Wong, however, pointed out that the lockdown imposed by the government in mid-March has had a positive impact on the number of people who got infected with SARS-CoV-2, the virus that causes COVID-19, or died of the severe respiratory disease.

“Currently, we still have a lot of reserved capacity. If the [task force] does make a decision [on the lockdown], we’re in a good position to handle or to prepare for the next surge,” he said.

Until a vaccine for COVID-19 is developed, the public should expect “surges” in cases, Wong said.

“That’s why it’s important not just to test [possible cases] but to also continue to practice the new behaviors to prevent or delay a resurgence of cases,” he said. These include physical distancing, wearing masks, frequent hand-washing and observing proper cough etiquette. 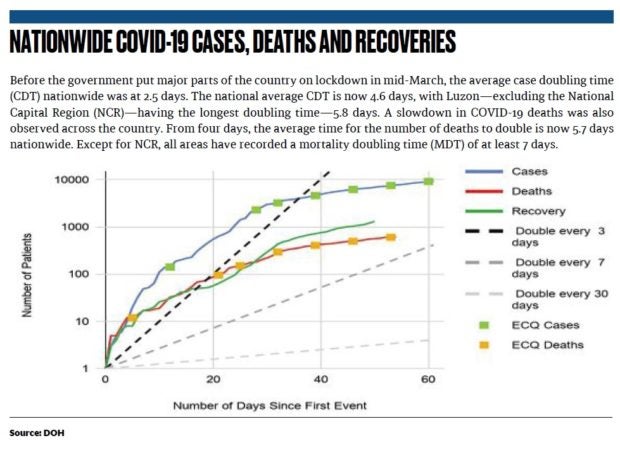 Health Undersecretary Maria Rosario Vergeire said that just because there is already a flattening of the curve, people can already return to their old ways.

“We should not become complacent. The moment that we lift our restrictions, there would be a resurgence,” she said.

On Tuesday, the Department of Health (DOH) reported 199 new cases, bringing the nationwide total to 9,684. The number of recovered patients climbed to 1,408 with the recovery of 93 more patients. The death toll, however, rose to 637 with the deaths of 14 more patients.

In his sixth report to Congress on his administration’s response to the epidemic, President Duterte said on Tuesday that the DOH had expanded its testing capacity from 6,220 to 8,935 daily, exceeding its target of 8,000 tests daily.

The DOH had planned to hit that target by April 30, but failed. On Tuesday, Vergeire said the DOH wanted to hit 30,000 tests a day by end-May.

She also said that the DOH has conducted 130,769 tests so far and identified 36,200 close contacts of positive cases.

Wong said that even with the current testing backlog of 8,000, this “will not substantially speed up the curve.”

“Even if we have a backlog of around 8,000 specimens, not all of them are expected to be positive. The current positivity rate is around 10 percent, so that’s 800 cases. That would not add very much or affect the case doubling time that much,” he said.

Vergeire said the DOH was dealing with the current backlog by distributing the samples for testing to accredited laboratories, as well as by hiring more workers.

Some of the major laboratories, she said, have already reduced their backlog, such as the Research Institute for Tropical Medicine, from 2,500 to 600, and the University of the Philippines National Institutes of Health, from 1,300 to 200.

She also said that half of the country’s 81 provinces have not reported any new case of the coronavirus in the last two weeks and that the new cases remain concentrated in Metro Manila. Of the 199 new cases reported on Tuesday, 173 were in the metropolis.

Vergeire, however, did not explain why those provinces had not reported new cases.