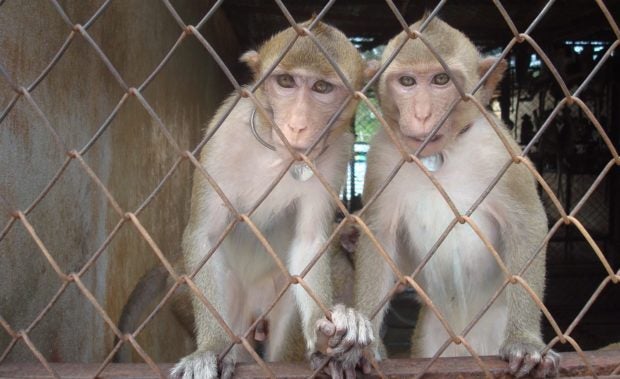 THEY BELONGTO THE FOREST Commonly known as “matsing” or “unggoy,” long-tailed macaques are a subspecies of the crab-eating macaques and are endemic to Philippine forests. —PHOTO FROM CRUELTY FREE INTERNATIONAL

MANILA, Philippines — Animal rights advocates have urged the Department of Environment and Natural Resources (DENR) to refuse any permits seeking to trap wild long-tailed macaques (Macaca fascicularis philippensis) in Romblon province for research and export purposes amid the reported population boom of these monkeys on the island.

The call came after reports that the DENR would consider applications for permits to capture the primates for breeding farms, which supply animals for laboratory experiments and testing.

Trapping wild primates is cruel and taking them from their habitats and social groups can cause immense suffering in animals, said the Philippine Animal Welfare Society (PAWS) and Action for Primates.

“One of the reasons given by the DENR for considering an application for the capture of the wild monkeys is conflict arising between people and the monkeys,” the groups said in a joint statement on Monday.

“Conflict issues, however, are usually due to human activities, such as the destruction and fragmentation of the natural habitat, forcing primates to compete with people over land and resources,” they added.

Commonly known as “matsing” or “unggoy,” long-tailed macaques are a subspecies of the crab-eating macaques and are endemic to Philippine forests.

They were classified as near-threatened in the most recent assessment by the International Union for Conservation of Nature in 2008.

In an interview, Henry Adornado, DENR director of Mimaropa region, confirmed the rising number of macaques in Romblon but said the agency had yet to estimate their total population.

Among the reasons for their increasing numbers are the absence of natural predators, such as the Philippine Eagle, and people leaving them alone in the wild.

With their growing numbers, the monkeys pose a threat to banana and coconut plantation of communities, Adornado said.

But Nedim Buyukmihci, an animal rights activist and representative of Action for Primates, said there were human approaches to population control to resolve conflicts without resorting to the capture and removal of wild macaques from their natural habitats.

These include reproduction control, relocation and educating communities so that monkeys would not be encouraged to rely on humans for food.

“At a time when there is increasing awareness of the devastating consequences that human activity is having on the natural world, including nonhuman primates, it is imperative that we learn to coexist with other species rather than just eliminate them when conflicts arise,” said Buyukmihci.

Instead of seeing these animals as nuisance, a protected area for macaques should be established in Romblon, said PAWS executive director Anna Cabrera.

“We can set things right by taking immediate steps to establish a protected area for macaques and to develop eco-friendly systems within human communities to allow them to live in harmony with wildlife,” she said.

Ricardo Calderon, director of the Biodiversity Management Bureau, said his office had yet to receive any applications for the capture and breeding of macaques in Romblon.

“Any application for permit will have to undergo site assessment and evaluation as part of the due diligence being required under existing rules and regulation,” Calderon told the Inquirer.

Breeding of wildlife for commercial purposes is allowed under the Wildlife Resources Conservation and Protection Act through the issuance of a wildlife farm-culture permit. Only offspring of those bred in captivity may be traded and exported.

Earlier reports cited the Philippines as among the world’s major exporters of laboratory monkeys. In 2015, however, macaque exports were suspended after an Ebola Reston virus killed 11 monkeys. This particular strain was nonfatal to humans.

In the late 1990s, these exports were similarly halted after a monkey shipped from a primate farm in Laguna province died in Texas, also of the Ebola virus. At least 49 other primates had to be put to death due to the virus. INQ