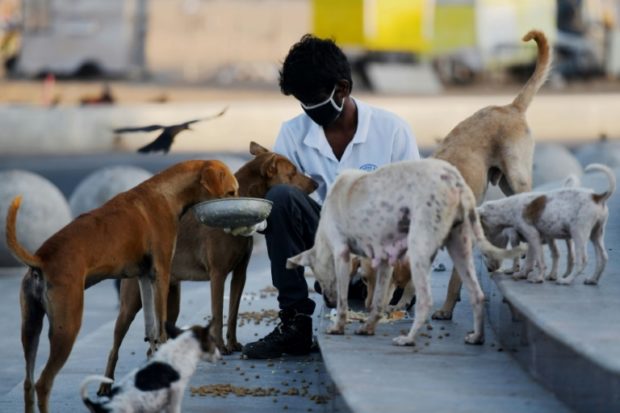 An army of Indian animal lovers has emerged to feed millions of strays left hungry and thirsty by the coronavirus lockdown across the world’s second-most populous nation. Image: AFP/Arun Sankar

Tails are already wagging as Priyanka Gusain stops her car, sacks of cattle fodder and dog pellets on her back seat and water in the boot for her evening rounds in Delhi.

Gusain and her mother, Vilochna, are serving in an army of Indian animal lovers that has emerged to feed millions of strays left hungry and thirsty by the coronavirus lockdown in the world’s second-most populous nation.

Used to scavenging scraps from hotels, restaurants and roadside stalls, the animals were left without sustenance as people withdrew to their homes in late March.

“No one is taking care of them. That thought made me do all of this,” Gusain, who designs and sells her own line of footwear, told Agence France-Presse.

An estimated 30 million stray dogs and five million stray cattle roam India’s usually bustling streets—weaving in and out of traffic and sheltering under highway overpasses during the scorching summer afternoons.

But as the virus lockdown took hold, many urban areas turned into virtual ghost towns, leaving the animals to fend for themselves.

In the southern city of Chennai, Vinod Kumar—of the animal welfare charity Blue Cross of India—said the situation was desperate.

“In many cases, the dogs… in places where there are not many residences, they actually starve,” he told AFP.

Stray cattle, left to roam the streets by their owners or abandoned when they get old, are also struggling to survive.

Even working animals have become casualties.

With tourism and mining having ground to a halt, horses, donkeys and ponies were being “thrown out left, right and center,” said Gauri Maulekhi of People for Animals India.

Compounding the problem, pets are being abandoned for fear they could spread coronavirus to their human owners, several shelters told AFP. 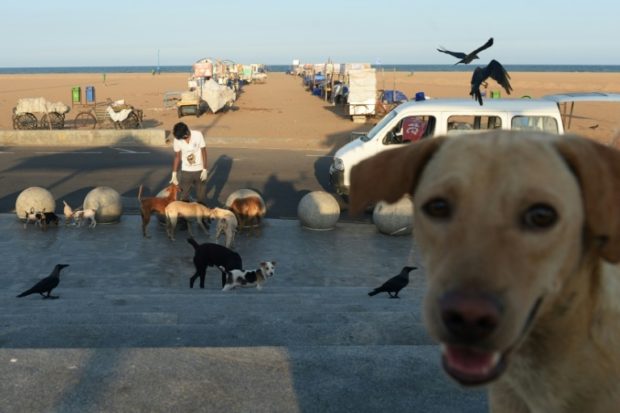 An army of Indian animal lovers has emerged to feed millions of strays left hungry and thirsty by the coronavirus lockdown across the world’s second-most populous nation. Image: AFP/Arun Sankar

Animal activists have pressed local authorities to issue “feeding passes” that will allow them outside to help the animals at risk.

On one feeding mission, an AFP reporter saw cows, dogs and crows all descend on an offering of dried food.

The mercy missions are not universally popular.

Gusain, who obtained a pass through a Delhi shelter organization, has faced pushback from people who snap at her: “You are doing so much for dogs, what about humans?”

“If there are a hundred mouths to feed, we are perhaps able to feed only 10,” she told AFP.

“There is never enough. There is a huge shortage.” CL /ra