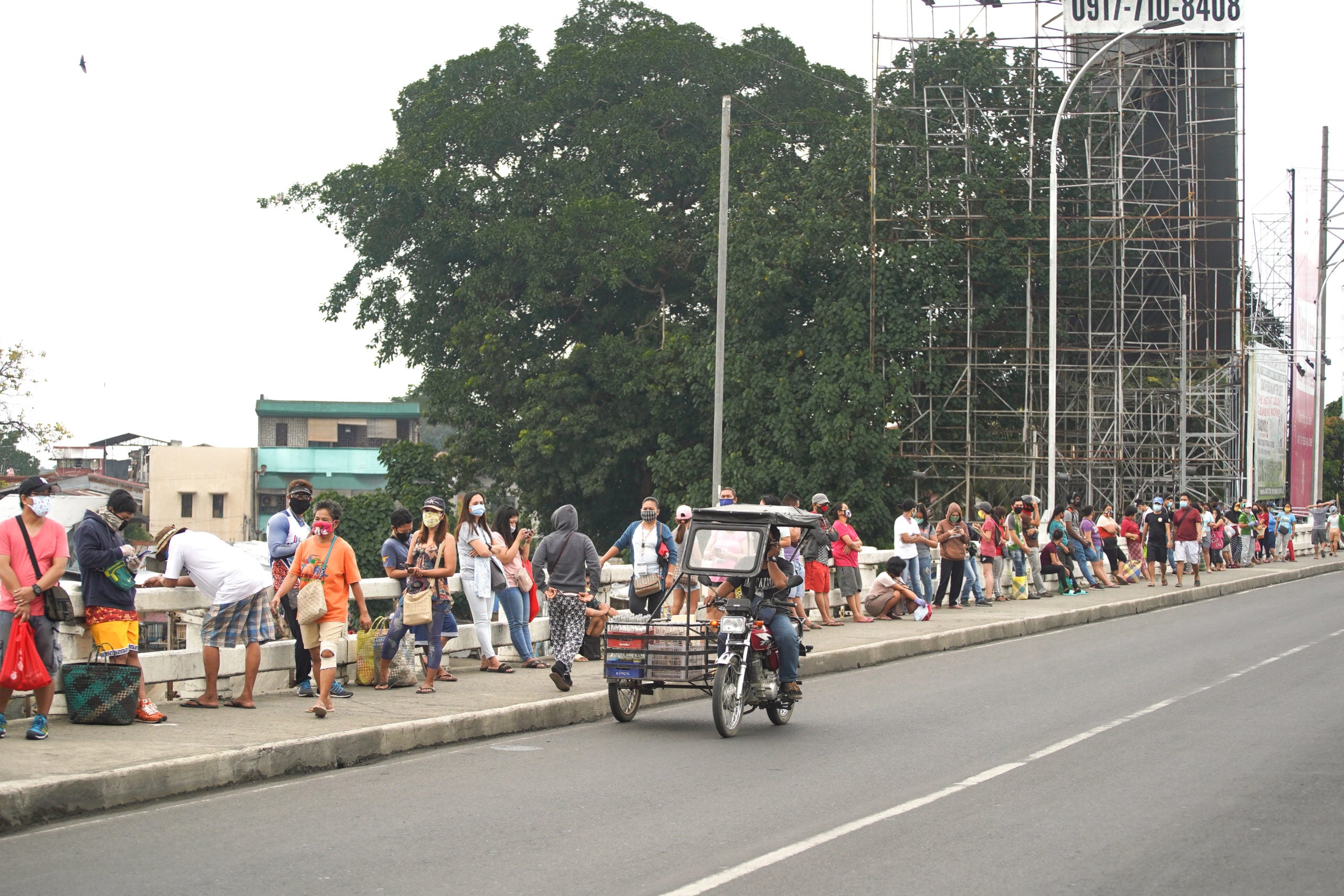 Residents form a long line along Bankerohan Bridge as local authorities try to manage the crowd inside the Farmers Market Center in Davao City. KARLOS MANLUPIG

A sidewalk vendor, who wants to be named only as Nelia, told the Inquirer that she started falling in line around 5 a.m. but was able to enter the Farmers Market Center in Bankerohan three hours after.

“I went to the market on my regular schedule but I was shocked to see a longer line. The line spanned across the Bankerohan Bridge,” Nelia said.

She said she assumed that one of the reasons for the longer line is that local authorities are now more meticulous in crosschecking the food and medicine passes, making sure these correspond to daily schedules, consistent with the coding scheme.

In the coding scheme implemented by the Davao local government, passes with control numbers ending in odd numbers can only be used on Mondays, Wednesdays and Fridays. Residents with passes ending in even numbers can go out on Tuesdays, Thursdays and Saturdays.

The local government confirmed on Friday that several shops, including in the massive market complex, were shut down for violating lockdown rules, causing buyers to gather in open stalls.

Nelia added that social distancing also caused the stretch of the duration of queueing and buying which, in turn, caused the spillover of the queue to the other side of the bridge.

“It is a hassle but I do not mind queuing as long as social distancing is observed,” she said.

“The problem is there are other people who do not follow the social distancing. We end up like dancing the cha-cha because we need to step forward or backward if the person next to us would move closer,” Nelia said.

Asked why she would risk going out despite the rising number of COVID-19 cases in the city, she said she is making the gamble for the survival of her family.

“I need to make a living especially in our situation right now. I know it is dangerous but we are also trying to make precautions,” Nelia explained.

Mayor Sara Duterte said that as of Friday morning, there are 127 patients and suspected cases admitted in the Southern Philippines Medical Center and different COVID-19 isolation facilities in the city.

The total number of confirmed cases in Davao City is now 119 with at least 20 deaths.

As a response, the local government and health workers stepped up contact tracing and conducting random tests especially in densely populated areas.

Davao City is also preparing to establish additional laboratories to make COVID-19 testing more accessible and faster in a bustling city with a population of at least 1.6 million.