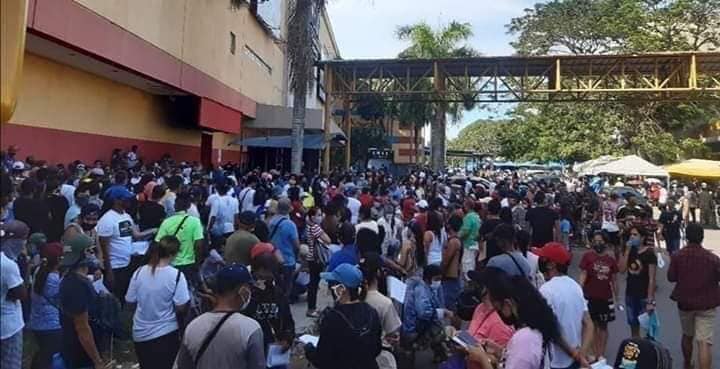 WAITING FOR AID Beneficiaries of the government’s cash aid gather at a mall parking lot in Lucena City on Tuesday as they wait for their turn to receive the money. —ALLAN LLANETA/Contributor

The Department of the Interior and Local Government (DILG) is investigating local government units (LGU) that failed to implement safety protocols during the distribution of the national government’s cash aid.

It was not immediately clear, however, what penalty the agency would impose, but Noel Bartolabac, the DILG director for Calabarzon (Cavite, Laguna, Batangas, Rizal and Quezon), said the department might issue “show-cause” orders to the local officials.

The payout of social amelioration (P6,500 per eligible household in Calabarzon) has been continuing for several weeks now, but delays, from screening beneficiaries to printing out application forms by undermanned government offices, may extend the distribution of the first tranche beyond the April 30 deadline.

In order to catch up, many local governments have shifted from going house-to-house to hand over the money to herding beneficiaries in clusters to assembly or barangay halls, putting people at risk of a community transmission of the coronavirus.

The Department of Social Welfare and Development (DSWD), which oversees the program intended for the poorest sectors affected by the pandemic, said local governments could come up with their own “strategies” for the payout. But it reminded officials to limit the crowd and strictly maintain physical distancing.

A glaring violation of this protocol happened in Lucena City on Tuesday when at least 9,000 people, although wearing face masks, waited in line from morning to midnight, interacting at a very close distance.

“I believe what happened there was people came in earlier than their supposed schedule, kaya naipon (that’s why the crowd grew bigger),” said Joseph Arceo, the DSWD regional spokesperson.

“The DSWD and the city government were compelled to speed up the distribution to beat the April 30 deadline,” Mayor Roderick Alcala said on Wednesday. “If not for the deadline, the distribution could have been held in every barangay or clusters of villages.”

Alcala said the local government needed at least 10 days for an organized distribution to the 50,000 beneficiaries who were chosen from the city’s record of more than 70,000 poor households. He said the DSWD took two weeks to finish the verification of recipients.

To beat the deadline, the DSWD decided to distribute the financial aid to some 9,000 beneficiaries from 11 villages in a single day at the city center, according to Alcala. But he clarified that it was the DSWD that led the event, with the city government “only assisting them.”

The mayor said each barangay had its own schedule to go to the venue. “The problem started when most of them arrived at the venue ahead of their schedule. They all came rushing,” he said.

Lt. Col. Romulo Albacea, city police chief, said: “With that desperate crowd wanting to receive their … cash aid [as they faced] hunger, it would be difficult for any lawman to force them to leave.”

No more, no less

Arceo said the Lucena incident was not the first. In some instances, he said, social workers had to call in the police to break up the crowd and suspend the cash distribution for the day.

He said some beneficiaries thought they had to come ahead of time because the money might run out, or that others who did not qualify in the initial screening still joined the queue in the hope of getting the cash aid.

“That should not be the case because the money [prepared for the distribution] is just enough—no more, no less. If they feel they should have been qualified, they should seek out our grievance center or their village officials for reevaluation,” Arceo said.

In Calabarzon, close to half, or 978,316 households, out of the 2.24 million targeted families had received the cash assistance as of April 29.

Out of 142 local governments, only 13 have fully disbursed the April subsidy, the DSWD said.