Back at work, Boris Johnson urges patience over UK lockdown 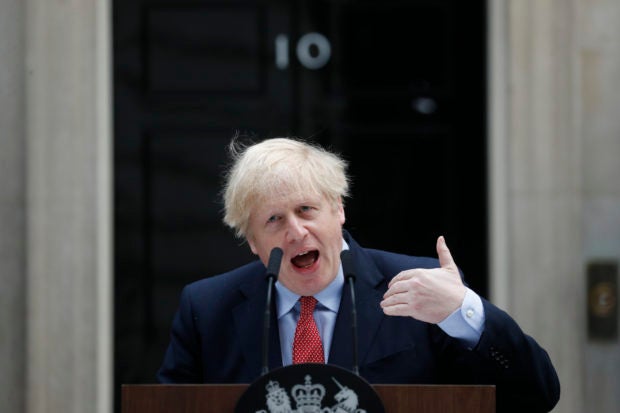 British Prime Minister Boris Johnson makes a statement on his first day back at work in Downing Street, London, after recovering from a bout with the coronavirus that put him in intensive care, Monday, April 27, 2020. The highly contagious COVID-19 coronavirus has impacted on nations around the globe, many imposing self isolation and exercising social distancing when people move from their homes. (AP Photo/Frank Augstein)

On his first day back at work in three weeks after a bout of COVID-19 that left him dangerously ill, Johnson said Britain had reached the moment of “maximum risk” in its outbreak.

Speaking outside his 10 Downing St. office, Johnson said the country was reaching “the end of the first phase of this conflict” but warned that a quick end to a lockdown due to last at least until May 7 was not in sight.

“I refuse to throw away all the effort and the sacrifice of the British people and to risk a second major outbreak and huge loss of life and the overwhelming of the (health system),” said Johnson.

The 55-year-old leader appeared thinner but better-rested than when he was last seen in public early this month.

As of Monday, Britain had recorded 21,092 deaths among people hospitalized with COVID-19, the fifth country in the world to surpass 20,000 deaths. Thousands more are thought to have died in nursing homes during the pandemic.

Despite the death toll, Johnson’s government is under mounting pressure to set out a blueprint for easing the lockdown that has sharply curtailed business and daily life since March 23.

The government is paying 80% of the salaries of almost 4 million people who have been furloughed by their employers, more than 1.5 million Britons have applied for welfare benefits in the past month, and the government’s economic watchdog says the economy could shrink by 35% by June 1.

In signs the country may be experiencing lockdown fatigue, the volume of road traffic has begun to creep up, and businesses including construction sites and home-supply stores have begun to reopen after introducing social distancing measures.

As other European countries begin to reopen businesses and schools, Johnson said he shared Britons’ impatience to get back to normality. But he said “we simply cannot spell out now how fast or slow or even when those changes will be made.”

Johnson indicated that any loosening of the lockdown would happen in stages, as authorities “begin gradually to refine the economic and social restrictions and one by one to fire up the engines of this vast U.K. economy.”

Johnson spent a week in St. Thomas’ Hospital in London earlier this month, including three nights in intensive care. When he was discharged on April 13, he thanked medical workers at the hospital for saving his life, saying his condition “could have gone either way.”

During his absence, Johnson’s Conservative government has struggled to counter criticism over shortages of protective equipment for medical workers and a lack of testing for the virus. The government has promised to conduct 100,000 coronavirus tests a day by the end of the month — which arrives Thursday — but remains far off that target, conducting 37,024 tests on Sunday.

The government can point to some successes. The National Health Service has been stretched but not overwhelmed by coronavirus cases, and several temporary hospitals built to take an overflow of patients have barely been used.

Health Secretary Matt Hancock said that medical services put on hold during the outbreak would be re-started from Tuesday, beginning with cancer and mental health treatments.

Countering claims that the government has been secretive in its handling of the crisis, Johnson promised decisions about ending the lockdown would be made “with the maximum possible transparency” and in consultation with businesses, regional authorities and opposition parties.