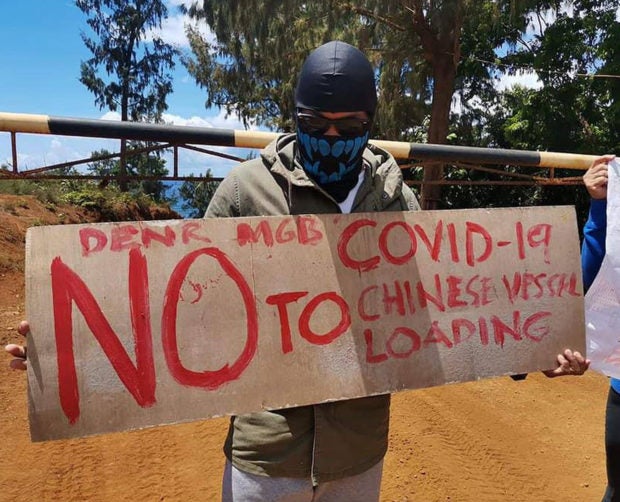 NO LOADING Residents of Homonhon Island in Guiuan town, Eastern Samar, hold a “silent protest” against the loading of chromite ore by a foreign vessel. —EFREN HIPE/CONTRIBUTOR

TACLOBAN CITY—The people of Homonhon Island of Guiuan town in Eastern Samar province are holding a silent protest over the continued loading of chromite ore on a China-bound ship that has docked on the island.

Tarpaulins and placards have been displayed outside their houses to express their opposition to the continued mining of their natural resources as well as the presence of the foreign vessel, which arrived on the island on April 4 manned by 13 Chinese and four Myanmar nationals.

Danny Lagos, president of Save Isla Homonhon, which opposes any mining activity on the historic island, said the residents could not hold a protest rally due to the community quarantine imposed by the municipal government to prevent the spread of the new coronavirus disease (COVID-19).

“But some [residents] went briefly to the wharf to register their opposition and went home immediately,” said Lagos in a phone interview on Friday.

The Mines and Geosciences Bureau in Eastern Visayas has allowed the Panamanian-registered vessel, MW VW Peace, to load 7,000 metric tons of chromite ore, which would be shipped to China.

The presence of the foreign vessel was strongly opposed by both the provincial government and the Borongan Diocese.

Gov. Ben Evardone said the arrival of the vessel on Homonhon Island was a violation of the general community quarantine, which prohibited the entry of ships, either local or foreign, into the province to prevent the spread of COVID-19.

“Our province has done all possible measures to protect our people from this disease and yet this mining operation has given Estehanons anxiety and fear over the possibility that all our efforts to prevent this disease from entering our province will go down the drain,” Evardone told Environment Secretary Roy Cimatu in a letter dated April 14.

Lagos said that even if the vessel crew had followed protocols on social distancing, and wore face masks and personal protective equipment, these were not enough to ensure the virus would not spread.

“They should have at least disinfected first the [foreign] vessel and even the barge that will collect and load the chromite,” Lagos said.

Techiron Resources, which was able to secure a permit to mine chromite ore, could have loaded the mineral after the general community quarantine had been lifted. “Anyway, these chromite will not rot if these will not be loaded immediately,” Lagos said.

The Department of Environment and Natural Resources (DENR) clarified that the Homonhon mining activity has been in operation for the last three years with the proper permit and legal documentation from the proper government agencies.

The DENR said that there is no exploitation of mineral resources happening in the province because the mining company had been abiding all the regulations to operate.

In connection with the enhanced community quarantine requirements, which the residents claimed had been violated, the DENR explained that the vessel that hauls the minerals was stationed 1.5 kilometers away from the shore and no crew were allowed to disembark from the ship.

The department also dismissed the possibility of COVID-19 infection since the nearest community or residential area is five kilometers away from the shore where the hauling operations happen.

The DENR said the minerals were being loaded using mechanical equipment that no manual hauling had been required during the operations, saying “no people are disembarking from the ship and no people from the shore are going inside the ship.”

Officials also said personnel from the Philippine Coast Guard were there to ensure everything is in order.

The government agency also said that the mining company was able to secure a clearance from the Department of Health for them to continue operations during the quarantine period, being included in the health protocol that no importation or exportation should be hampered.

The DENR also urged local officials that should they find any violations committed or environmental laws being breached,  they rather file cases in court or lodge a complaint in a proper forum.