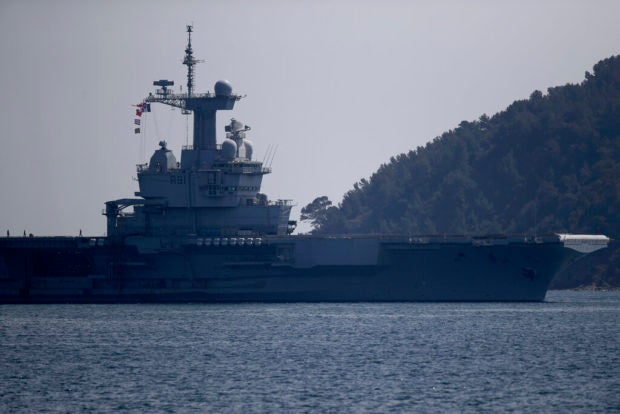 The French aircraft carrier Charles de Gaulle arrives in the bay of Toulon, southern France, Sunday April 12, 2020. The Defense Ministry said in a statement that around 40 sailors showed symptoms compatible with COVID-19, the disease the coronavirus causes. The new coronavirus causes mild or moderate symptoms for most people, but for some, especially older adults and people with existing health problems, it can cause more severe illness or death. (AP Photo/Daniel Cole)

PARIS — The French navy is investigating how the coronavirus infected more than 1,000 sailors aboard the aircraft carrier Charles de Gaulle, amid growing pressure on government leaders to explain how it could have happened.

The ship, France’s biggest carrier and the flagship of its navy, is undergoing a lengthy disinfection process since returning to its home base in Toulon five days ago.

One person remains in intensive care and some 20 others hospitalized, navy spokesman Cmdr. Eric Lavault told The Associated Press.

Two of four U.S. sailors serving aboard the Charles de Gaulle as part of an exchange program also tested positive, according to a U.S. Navy statement. A British sailor was aboard another vessel, Lavault said, refusing to reveal the sailor’s health status.

Lavault insisted that the aircraft carrier’s commander sought to increase the physical distance among the crew on the vessel, where there was no testing equipment and for most of its three months on operations, no masks.

It is “very difficult to apply social distancing measures … on a combat vessel,” Lavault said. But “security of the crew is the first concern. A combat ship, especially an aircraft carrier, is nothing without its crew.”

A similar outbreak on the USS Theodore Roosevelt and a dispute about how the at-sea health crisis was handled led to the firing of its captain and the resignation this month of the acting U.S. Navy secretary.

The French navy has been spared major controversy so far, but the defense minister and the head of the French military’s health service arm were questioned Friday about the infections at parliamentary hearings.

Defense Minister Florence Parly told lawmakers that 1,081 of the 2,300 people aboard the Charles de Gaulle and its escort vessels have tested positive so far — nearly half the overall personnel.

While the virus has immobilized the immense and important ship, Parly insisted that otherwise “our forces continue to assure the defense of our country at sea, under the sea, on land and in the air.”

An investigation to retrace the paths of the personnel is in progress. Lavault noted that the aircraft carrier made a call in the French port of Brest, on the Atlantic Ocean, had been in the North Sea as part of a “naval diplomacy” mission with NATO partners, and had stopped in Cyprus during an operation in the eastern Mediterranean Sea to join in the fight against the Islamic State group.

Journalists had boarded the vessel at one point.

“All hypotheses are on the table,” Lavault said.

So far, 350 crew members have been grilled about their movements on and off the vessel, according to Lavault.

The defense minister defended the decision to allow the ship to stop in Brest in mid-March, even though France had already ordered all schools closed to fight the virus and the government was preparing confinement measures. Hours after the ship left, President Emmanuel Macron announced a nationwide lockdown, among the strictest in Europe.

With nearly 2,000 sailors on the aircraft carrier alone, there is a constant flow of people frequenting the infirmary. In the North Sea, temperatures sometimes dropped to -5 degrees Celsius (23 F), he said.

The number of infections “rose exponentially” from about April 4-5, and lung scans were taken on suspected cases, Lavault said.

“It’s from this date that the commander decided to alert Navy headquarters to propose ending the operation, a decision taken immediately by the (defense) minister,” he said.

The aircraft carrier was back in its home base at the Mediterranean port of Toulon on April 12.

“We are and will be transparent” about the health situation, the health director Maryline Gygax Genero told the parliamentary commission.

Lavault said the carrier was being cleaned top to bottom, first with high-pressure water at 60 C (140 F), then with an anti-viral product, a process that could take weeks. He said the goal is to get the carrier back to sea sometime in May.

France has been among the countries hardest hit by the virus, with more than 18,000 deaths confirmed as of Friday and more than 100,000 reported cases. As France heads into a second month of confinement, the head of the national health agency said Friday that the country is seeing “a slow but regular decline” in the virus, with the number of hospitalizations and people in intensive care continuing to drop.