A group of volunteers is helping farmers in Nueva Ecija sell their mangoes by connecting them directly to interested buyers in Metro Manila.

The group named Peace and Reconciliation Urban Manila (PARUM) began calling for orders for the mangoes grown in the municipality of Lupao last Friday, April 10. The volunteers, headed by AJ Moldez, have partnered with the Lupao Vegetable Growers Association for the effort, Moldez told INQUIRER.net today, April 12. 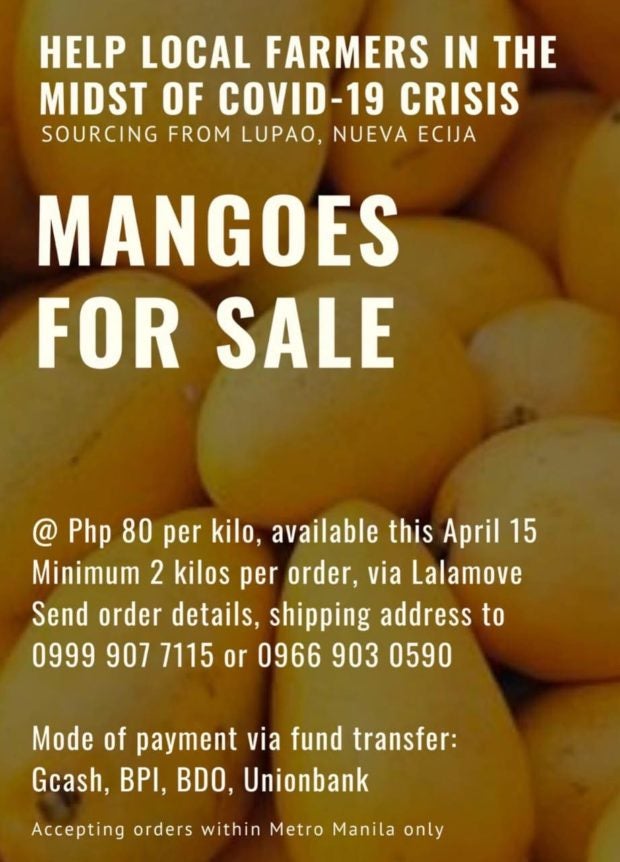 The fruits are being sold for P80 per kilo with a minimum order of 2 kilos. The mangoes will be transported to a church along West Avenue in Quezon City tomorrow and will be sorted out by the volunteers. Deliveries will begin on Wednesday, April 15 via Lalamove, whose delivery fee will be shouldered by the customer.

However, Moldez said that they have now cut off orders since they received calls for almost five tons of mangoes already. The influx of orders came in less than 24 hours since they started looking for customers.

The team will contact the farmers again to check if they have more mangoes to sell before accepting orders once more. Those interested in ordering for future batches may message them via 0999 907 7115 or 0966 903 0590. Payments are made through fund transfers via BPI, BDO, Unionbank and Gcash.

Majority of the proceeds go directly to the farmers while around 5% is allocated for the gas needed to transport the produce. Moldez also stressed that the effort centers on “people in need being helped by people in need,” and bayanihan (spirit of community).

Along with Moldez, PARUM is formed by two other volunteers, Bennette Mañulit and Maimai Lim. The group was created on March 28 as a response to the COVID-19 health crisis that has also affected farmers’ incomes due to the quarantine measures. The team was formed under a larger organization called PeaceBuilders Community, which is based in Davao City.

Prior to their initiative with the farmers in Lupao, PARUM also distributed 650 kilograms of rice and vegetables from farmers in Nueva Vizcaya to the community of Alrich, Napindan in Taguig City. The team worked with the Philippine Navigators and the Christ Jesus Our Life Church for the relief effort.

The produce were transported by their partner farmers via a tricycle to a road near Balintawak in Quezon City, where Moldez loads them onto a truck to bring them inside the metro. 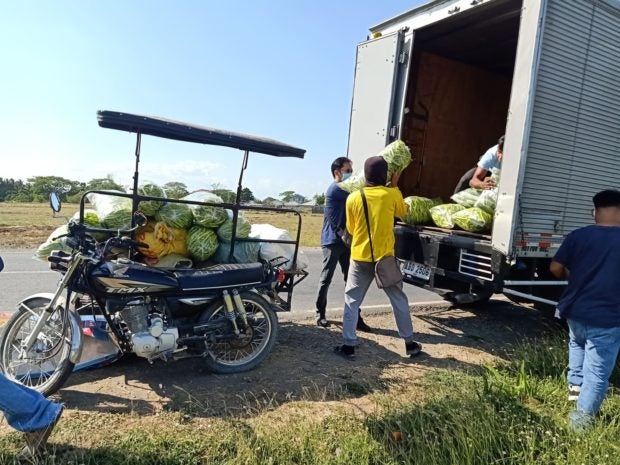 Farmers loading their produce onto a truck from a tricycle. Image: Peace and Reconciliation Urban Manila

He then brings the vegetables to a church and sorts them out before delivery with his fellow volunteers. He assures those who ordered that they follow precautions against COVID-19 when handling the supplies. 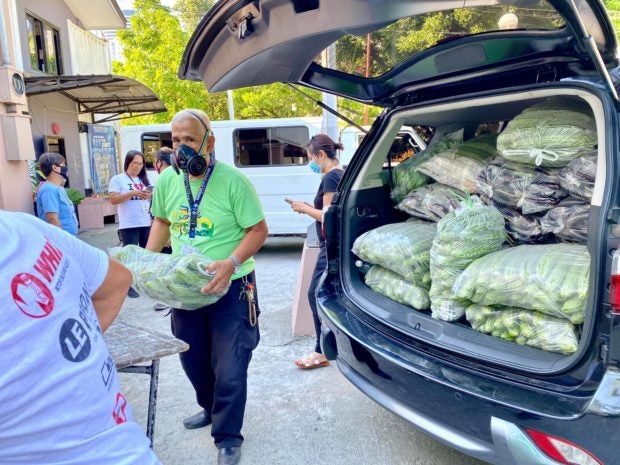 Volunteers loading the vegetables from Nueva Vizcaya onto a car. Image: Peace and Reconciliation Urban Manila

Aside from their latest effort to help the Nueva Ecija farmers sell mangoes, PARUM also aims to help another farming community in Buguias, Benguet sell at least 45 tons of produce in the upcoming days. JB