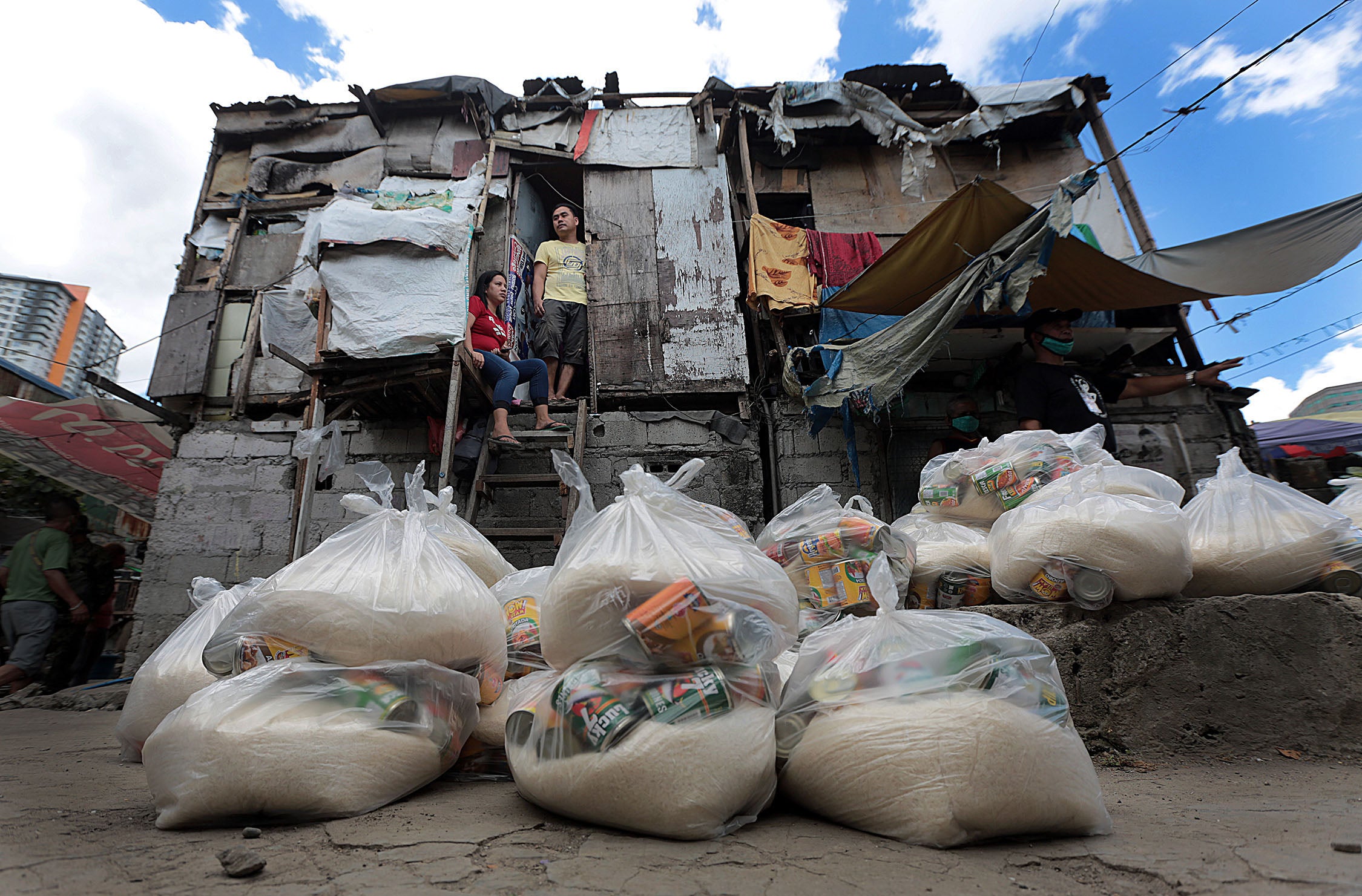 AFTER THE RIOT The Quezon City government delivered relief, consisting of 5 kilos of rice and 13 tins of sardines, to residents of a slum in Sitio San Roque on Thursday, a day after dozens of dwellers in the area held a rally to protest the slow distribution of aid, which led to a riot and arrest of 21 protesters. —GRIG C. MONTEGRANDE

The government will show no mercy for the Quezon City residents who were arrested on Wednesday for protesting the slow distribution of relief, Interior Secretary Eduardo Año said on Thursday.

A left-leaning group that was trying to exploit the coronavirus crisis to advance its interest instigated the protest, he said.

“So we’ll throw them in jail. No mercy for them,” Año said in a phone interview. “Everyone should cooperate. We are in a crisis and they are exploiting the situation.”

Police arrested 21 residents of a slum in Sitio San Roque in Quezon City for holding a rally on Edsa to demand faster distribution of relief items by the local government.

In an unscheduled address later in the day, President Rodrigo Duterte, who has placed the entire island of Luzon on lockdown to halt the spread of the new coronavirus in the Philippines, ordered the police and the military to shoot violators of the quarantine who would “dare to challenge” the government.

“Don’t test the Filipino. Do not try to test it. You know, we are ready for you. Violence or shooting or killing, I will not hesitate to order my soldiers to shoot you,” Mr. Duterte said.

“My order to the police and the military, as well as the barangay officials, is that when you create a disorder and there would be an occasion that you fight back and their (the authorities’) lives are put in danger, shoot them dead,” he said.

Año, in self-isolation after testing positive for the coronavirus, supported Mr. Duterte’s stand but noted that the President qualified his order for use of force.

“He said if these protesters fight back and use violence, and the lives of the police will be in danger, then they can shoot. That’s what he said,” Año said.According to Año, the protest was instigated by members of Kalipunan ng Damayang Mahihirap (Kadamay) and Sandigan ng Maralitang Nagkakaisa (SaMaNa), alleged fronts of the Communist Party of the Philippines and its armed wing, the New People’s Army.

He said the protesters’ reason for going out in violation of the Luzon quarantine was unjustified.

“It’s as simple as, if you do not have food to eat, you go to the barangay hall and air your complaint there instead of going to the leftist organization and stage a rally,” he said.

Several senators questioned the motive of the protesters and said the police should investigate what had prompted the action.

Threats not a solutionThey said, however, that the President’s threat to shoot protesters was not a solution to people’s complaint about hunger during the lockdown.“Threats are not a solution to COVID and hunger,” Sen. Francis Pangilinan said, referring to the disease caused by the new coronavirus that has spread to the Philippines and infected more than 935,000 people and killed some 47,000 of them in 207 countries and territories as of Thursday.

Congress passed a law last week giving the President special powers to deal with the pandemic and spend P200 billion to help poor people who had lost their livelihood as a result of the Luzon lockdown.Pangilinan said the government should release the funds for those who had nothing to eat and for health workers who needed protective equipment.

He called for a stop to meaningless posturing that did not deal with hunger and the coronavirus pandemic. Sen. Risa Hontiveros said many people were hungry, ailing and jobless. “Their urgent needs should be met not with death threats, but with compassion and concern,” she said.

Sen. Panfilo Lacson, a former chief of the Philippine National Police, said the police should take a deeper look at how the “riot” in Quezon City happened.

The police should look into whether this was a spontaneous incident caused by hunger or was instigated by people who wanted to destabilize the administration, Lacson said.He said the police should check if it was a “dry run” to gauge public sentiment, as Kadamay had posted an invitation to an April 1 event on its Facebook page.

“There is no saying, however, that all protests during the [lockdown] should be presumed as politically instigated. Yet it cannot be denied that there may be groups with motive to exploit the situation to advance their own political agenda,” Lacson said.

As for Mr. Duterte’s threat, Lacson said the warning was “exaggerated and harsh,” but was nothing new for the President.

He called for unity and said Mr. Duterte was dealing with delay and favoritism in the distribution of relief.Cabinet Secretary Karlo Nograles, spokesperson for the Inter-Agency Task Force on Emerging Infectious Diseases, said Mr. Duterte’s threat to shoot protesters reflected his desire to maintain peace and order amid the coronavirus crisis.

Kadamay and a group called Save San Roque Alliance said on Thursday they were working with the authorities to secure the release of the arrested protesters.

Kristina Conti, one of the lawyers for the protesters, said the police would bring charges of resistance and disobedience to authority against the protesters. She said the defense would question the arrests and bring a habeas corpus petition.

Quezon City Mayor Joy Belmonte in a statement appealed to the police to release the protesters “in the interim for humanitarian reasons.” —WITH REPORTS FROM JULIE M. AURELIO AND MARIEJO S. RAMOS