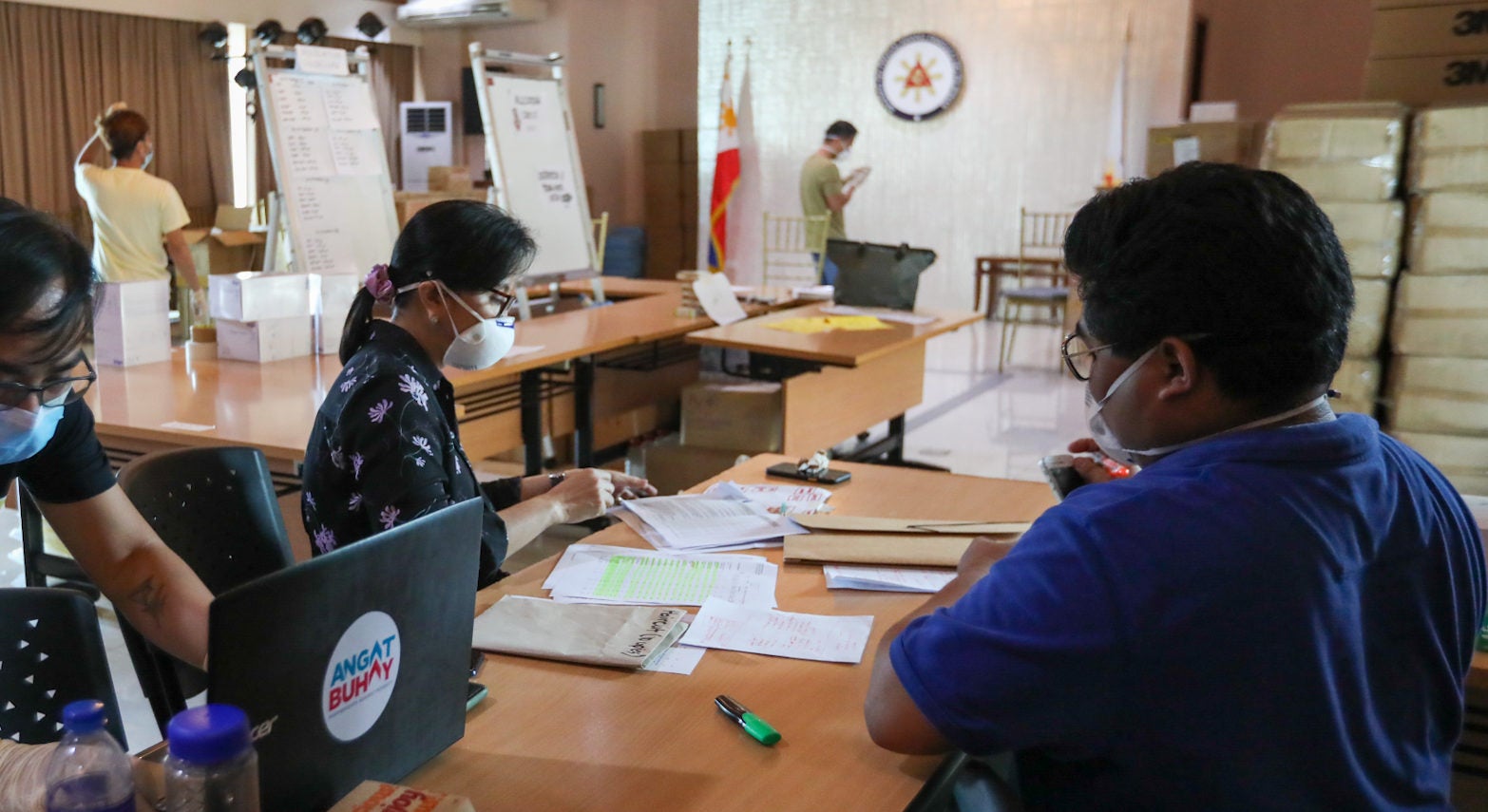 KILLING THE ‘COMPETITION’? A member of the Presidential Anti-Corruption Commission (PACC) wanted Vice President Leni Robredo investigated for supposedly working to “undermine’’ government efforts to deliver aid amid the coronavirus pandemic. The PACC chair later denied that the body had such a plan. A March 24 photo released by the Office of the Vice President shows Robredo and her staff reviewing documents pertaining to donated equipment for medical workers—the kind of work that has apparently unsettled PACC Commissioner Manuelito Luna. —CONTRIBUTED PHOTO

A call by an official of the Presidential Anti-Corruption Commission (PACC) to investigate Vice President Leni Robredo’s fundraising to support medical front-liners and locked-down communities during the national health emergency as a possible “illegal solicitation” that competed against the government met instant condemnation on Thursday.

PACC Commissioner Manuelito Luna told the Inquirer that he wanted the National Bureau of Investigation to look into the Vice President’s solicitation activities, which had generated more than P40 million since early last month after the new coronavirus pandemic reached the Philippines.

“The request is being done in my personal capacity as a taxpayer. This is not a PACC thing, just to be clear about it,” he said.

“The NBI is an independent body, we don’t have authority over (its officials), not even the secretary of justice does. I think making the request in my personal capacity is right in order not to put any color into it,” Luna said.

He said he had not sent any formal letter requesting the NBI to open an investigation.

But in a phone interview, Luna said he wanted the bureau to establish whether Robredo committed “illegal solicitations, actions that compete with, or calculated to undermine, national government efforts in this time of public emergency or national calamity.”

“If the NBI thinks my request has no basis, they can shoot it down. But I’m only being consistent. Remember that I also questioned before media the Vice President’s solicitation activities for Mindanao earthquake victims,” Luna said.

‘Would Zoom be alright?’

“Do I need to personally appear there or would Zoom be [all right]?” she said, referring to the video-conferencing tool. “There’s so much more work to do.”

Her spokesperson, Barry Gutierrez, said Luna’s statement was “so ridiculous, so inappropriate and so out of touch.”

He said that “since Day One” of the crisis, Robredo had been doing all she could to help health workers, government institutions and ordinary Filipinos “overcome the challenges” due to travel restrictions, supply shortages and the threat of infection from the virus.

“She did this because she saw a need, and she took action to meet it. She did this because it was the right and responsible thing to do,” Gutierrez said. “Anyone who insists that bringing much needed assistance to hospitals, health workers and poor Filipinos is somehow a ‘competition’ has absolutely no understanding of the gravity of the crisis we are all facing.”

President Duterte imposed a lockdown on Luzon nearly three weeks ago to contain SARS-CoV-2, the virus that causes the acute respiratory disease COVID-19.

Hours after the first reports of Luna’s statement came out, PACC commissioner Greco Belgica disavowed any connection between his agency and Luna’s position, saying it was “not asking anyone to investigate VP Leni Robredo.”

“On the other hand, we are thankful to everyone who are helping the front-liners and the needy, including the VP,” Belgica said.

“This is not the time for politicking,” he added. “Our main concern is to make sure all the needy Filipinos get all the help they need the President promised.”

Minority senators said they were outraged that such an investigation of the Vice President was being pushed at this point in the national health crisis and that her actions were being viewed as something that “may embarrass the government.”

“When has helping people become a crime?” Minority Leader Franklin Drilon and Senators Risa Hontiveros and Francis Pangilinan said in a joint statement.

“No one has the monopoly of helping alleviate the sufferings of our people. … “Saving lives is not a contest but everyone’s business,” it said.

‘Help and be jailed’

“PACC’s COVID-19 Motto: LAHAT NG TUTULONG, IKUKULONG (All those who help would be jailed),” he said on Twitter.

House members from both the majority and the minority blocs also blasted Luna’s call.

“They should stop investigating people trying to help, lest it is perceived as political. They should not burden the President with these acts while we are all trying to help fight this disease,” he said.

Ako Bicol Rep. Alfredo Garbin Jr. said Luna’s statement “smacks of bad faith and reeks of insensitivity to the plight of ordinary Filipinos, the doctors and nurses and other medical front-liners.”

Kabataan Rep. Sarah Elago said the Duterte administration should not view any response to COVID-19 as competition from its political rivals.

“Such is one of the reasons why we voted no to emergency powers law: its provision on penalties may be abused, now it is being used to further persecute political rivals/opposition and to silence dissent and criminalize even just those critical, independent voices,” she said.

“It is disappointing that those who are performing their duties are being attacked, while there are many government officials who were not even seen by their constituents since this crisis started,” he said.

“Son of a bitch, in this kind of crisis you’re still thinking about credit and grandstanding?! Well don’t worry, Manuelito Luna. When we think of all the lives lost because of red tape, corruption and your government’s precious injured pride, we’ll remember your name, too,” Henares said.

“They are going after people who are doing good! Just because they are making the president look bad? Unbelievable!” Merritt said.

Luna, who was a lawyer for the Volunteers Against Crime and Corruption (VACC), had filed charges against opposition figures and Duterte critics, including former President Benigno Aquino III, former Sen. Antonio Trillanes IV and Chief Justice Maria Lourdes Sereno, whom he also sought to be impeached in 2017.

In February 2018, Luna filed VACC’s complaint of multiple homicide and physical injuries and graft against Aquino, former Health Secretary Janette Garin and other former government officials over the dengue vaccine controversy. —WITH A REPORT FROM INQUIRER RESEARCH