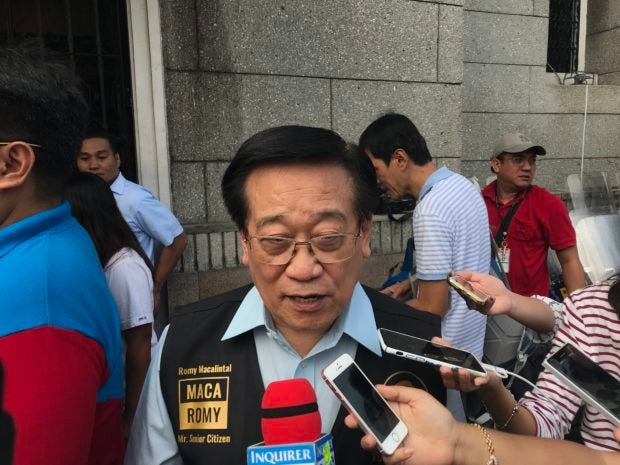 MANILA, Philippines — The National Bureau of Investigation (NBI) would only be on a “fishing expedition” as its move against Pasig City Mayor Vico Sotto for supposedly violating the Bayanihan to Heal As One Act bears no “genuine” case against him, election lawyer Romulo Macalintal said Thursday.

Macalintal, in a statement, further stated that the NBI should have realized by now its error to summon Sotto for allegedly violating national government policy on the quarantine period during the coronavirus disease (COVID-19) crisis.

Macalintal also served as the election lawyer for Sotto as the latter faced an electoral protest filed against him by losing Pasig City candidate Robert “Bobby” Eusebio.

“I hope, by now, the NBI has already realized its apparent error in asking Pasig City Mayor Vico Sotto to appear before it for alleged violation of Republic Act No. 11469 or the ‘Bayanihan to Heal as One Law’ which was enacted on March 24, 2020, for an alleged offense committed by Sotto on March 17, 2020 when he allowed some tricycles in Pasig City to transport health workers and patients to the hospital,” he stated.

“The NBI, being one of the offices tasked to implement laws, should be well aware of the elementary rule that laws cannot be applied retroactively,” Macalintal added.

The NBI sent the “invitation letter” to Sotto after he intially allowed tricycles to operate in Pasig City, to ferry health care workers fighting the COVID-19 to hospitals.

Macalintal also agreed with Sotto, saying that the law cannot be applied retroactively.

“Mayor Sotto is correct.  R.A. 11469 cannot be applied retroactively because the alleged act for which he is made to answer was committed on March17, 2020 and it was immediately rectified when he complied with the government’s policy on the matter and assured his full cooperation thereof,” Macalintal said.

“More so if we consider the fact that the Implementing Rules and Regulations (IRR) of RA 11469 signed by Secretary Carlos G. Dominguez was released only on April 1, 2020 to take effect “upon its publication,” he further stated.

The election lawyer that it the request of the NBI to Sotto to bring documents pertinent to the implementation of the enhanced community quarantine was “vague.”

“Moreover, the very vague request of the NBI for Mayor Sotto to bring ‘all relevant Local Ordinances, Issuances, and Plans and Programs and other pertinent documents relative to the implementation of the Enhanced Community Quarantine’ shows that there is actually no genuine case against him, and that the NBI would only be on a fishing expedition.”

The election lawyer added that for sure, Sotto knows that there are more “important matters” he has to attend to as Pasig City mayor.

“For sure, Sotto knows there are more pressing and important matters he has to attend to in Pasig City and should not be distracted by such a frivolous, if not reckless, invitation from the NBI for an alleged offense which was not punishable on the date of its alleged commission.”