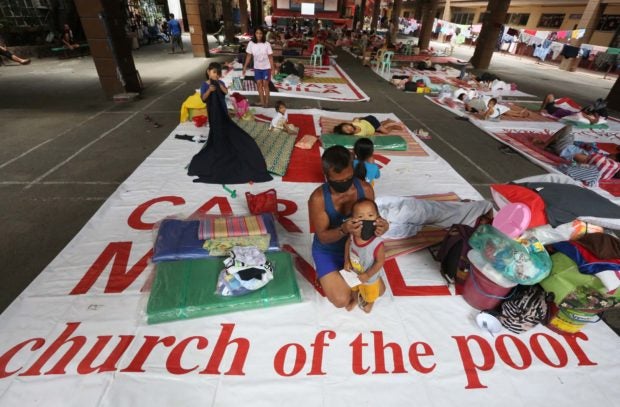 REFUGE The homeless are given shelter at Paco Catholic Elementary School in Manila during the Luzon quarantine. —MARIANNE BERMUDEZ

Several senators on Monday echoed pleas for the immediate release of up to P8,000 in financial aid to 18 million Filipino families as stated in the law that Congress passed last week to give President Rodirigo Duterte special powers to access billions of pesos in public funds to ease the social and economic impact of the new coronavirus pandemic on the Philippines.

As of late Monday, Duterte was expected to report on this matter.

Senate President Vicente Sotto III and Sen. Panfilo Lacson both said Republic Act No. 11469, or the Bayanihan to Heal as One Act, should have been immediately implemented after Duterte signed it on March 24, a day after lawmakers adopted it during a special session.

The law allows the President to tap as much as P275 billion in outlays, of which about P200 billion will be used as cash subsidies to indigent families.

Since the legislation was published in newspapers of general circulation on March 25, Lacson said the executive department should have already started the distribution of the cash handouts of P5,000 to P8,000 for two months.

“By now, those in charge of its implementation, particularly the distribution of cash dole-outs … should already be taking place,” Lacson told the Inquirer in a Viber message.

“If the executive does not act with dispatch, we may have a serious social problem to face. As the old adage says, ‘a hungry stomach knows no law,’” he warned.

“At this time when daily wage earners must have exhausted whatever limited savings and personal loans they subsist on, every meal missed by their children means desperation,” he said.

Lacson lamented that the Luzon quarantine had forced people in the City of Ilagan, Isabela province, to eat corn fungus to stave off hunger.

According to Sotto, the Senate was expecting Malacañang to submit a report of its accomplishments on Monday as the law mandated the President to report to Congress every week.

“We have incorporated [in the law] everything needed by the people. It’s now in the hands of the executive department and the local government units [to enforce the law],” said Sotto, who sponsored the law in the Senate.

“The President is empowered to suspend or remove any local official who is not responding properly [to the orders of the national government],” he added.

At the close of office hours on Monday in the House of Representatives, there was no word as to whether Malacañang had submitted Mr. Duterte’s report to Congress on his accomplishments after one week of the coronavirus response law’s passage.

In the Palace, officials had not responded to reporters’ questions about the report as of this writing.

Sen. Joel Villanueva said he wanted information about the “specific mechanisms” on the distribution of the financial subsidies, which the law delegated to the Department of Social Welfare and Development (DSWD).

“The immediate rollout of these programs should help stem the hunger that [is] already being felt by our people,” Villanueva said.

“We expect that the weekly report will contain statistics on the progress of the government’s response, as well as the amount and corresponding utilization of the funds, so we can scrutinize and see where [we can] provide further assistance to our government,” he added.

Sen. Francis Pangilinan said the government should make public the actual amount it would allocate in combating the coronavirus, both in the economic and the health strategies.

The opposition senator said the Palace should be able to answer if there was already a system in conducting “prompt and free testing” for COVID-19, the disease caused by the new coronavirus, as spelled out in the law.

“What about a system for transporting [medical] front-liners? How many test kits, [personal protective equipment], medical devices and medicines have since become available?” Pangilinan asked.

“How many of the 18 million low-income households have already received their P5,000 to P8,000 in emergency subsidy?” he added.

Apparently none in Metro Manila or anywhere. In Olongapo City, Zambales province, the local government said it had not received subsidy funds from the national government.

“[People] are asking us, ‘Where’s the aid from the President?’ That’s also our question: Where is it?” said Anthony Bayarong, chief of Olongapo’s public affairs office.

The DSWD in Central Luzon reported giving rice and tinned sardines to 10,538 families worth P4.5 million, but not cash handouts as provided for under the coronavirus response law.

In Mountain Province, Sadanga Mayor Gabino Ganggangan said the DSWD had sent rice and canned sardines for residents of locked down communities. But the town, he said, had sent back the food aid, asking the DSWD to give it to needy communities.

He said Sadanga, a rice growing town, could sustain itself.