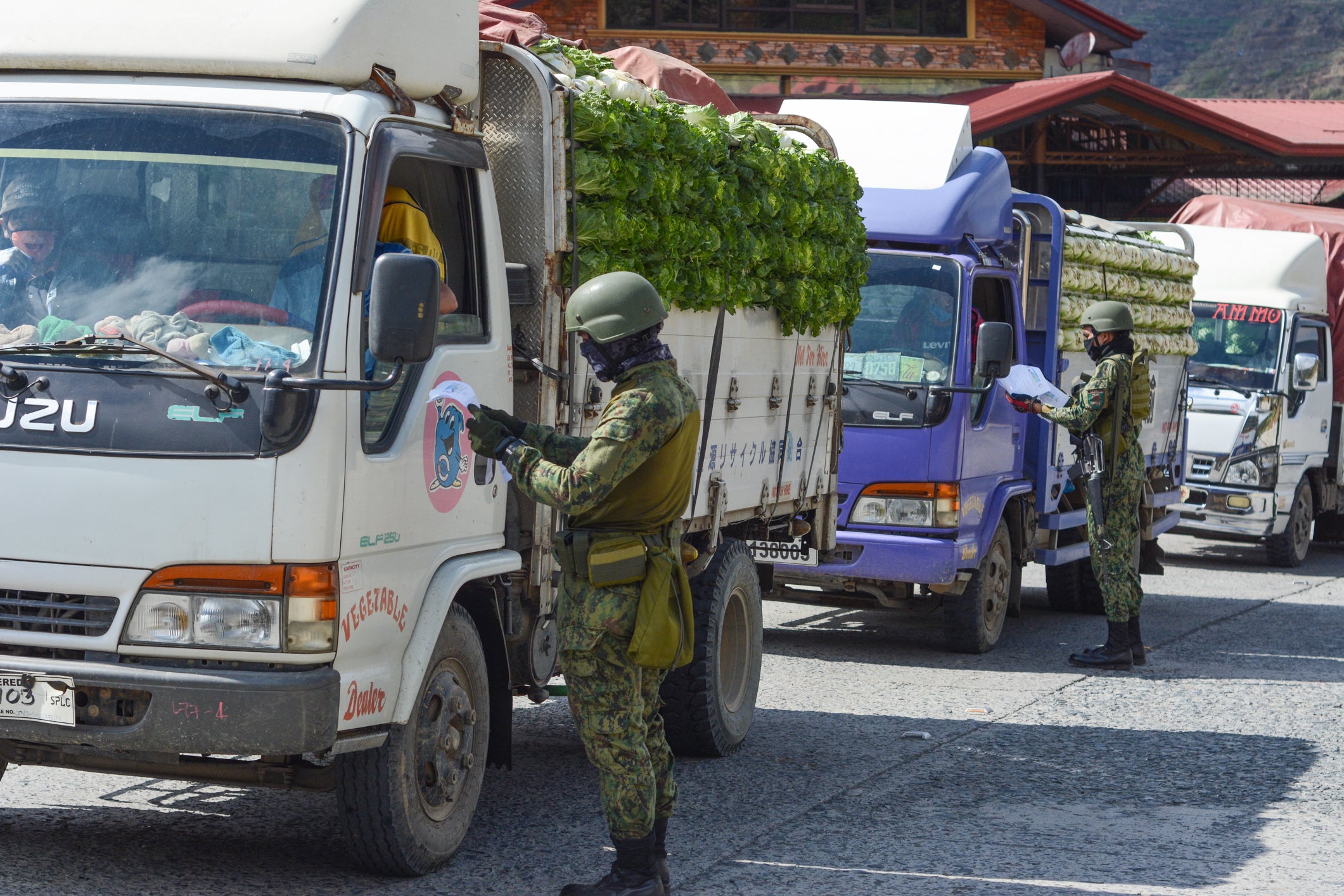 LOCAL GOVERNMENTS’ RULES Food trucks are not banned under the Luzon quarantine, but local governments keep turning them around at checkpoints. —KARLSTON LAPNITEN

MANILA, Philippines — The insistence of local governments to enforce their own quarantine directives is slowly resulting in an artificial food crisis as the movement of truckers and suppliers remains restricted.

In the Cordillera region, vegetable farmers have been forced to use their undelivered crops for use as fertilizers. In the Calabarzon region, poultry raisers have halted production as prices of chicken plummet due to oversupply.

People in some areas have taken their own course to stave off hunger. In the City of Ilagan in Isabela province, for instance, some have started eating corn fungus, while others have grown their own vegetables on vacant lots.

Agriculture Secretary William Dar has reiterated that supply of farm products is adequate, but has noted that disruptions in the movement of produce have hampered the delivery of basic items.

“Food supplies are enough, except in areas where we are having problems with checkpoints, but we are already sorting this out with the PNP (Philippine National Police),” he said.

Dar pointed out “an inconsistent appreciation of national government issuances, which has affected the movement of both goods and workers in the industry.”

The Inter-Agency Task Force (IATF) on Emerging Infectious Diseases has exempted workers in food, medicine, and other essential products and services from the Luzon lockdown, but local governments have imposed their own rules, adversely affecting the entire food value chain — from production and postharvest to marketing and delivery.

In Nueva Ecija province, some barangays forbid farmers to go to their farms as part of quarantine protocols, while in Masbate province, some 40 truckers and other drivers coming from Metro Manila have remained stranded at the port for a week now after Gov. Antonio Kho prohibited their entry.

The agriculture department also has received complaints from Pangasinan province and the region of Calabarzon, both considered major agriculture production areas.

With all issuances already in place to ensure the smooth delivery of food, Dar acknowledged that the problem lay in the implementation.

The Department of the Interior and Local Government (DILG) can issue show-cause orders against local governments that defy IATF issuances, but would rather communicate with key officials, said its spokesperson, Jonathan Malaya.

“As much as possible we don’t want to do this the hard way because this requires the cooperation of everyone. This issue is not black and white. There are nuances,” Malaya said.

The United Broilers Raisers Association has called on the national government to review the Local Government Code during times of crisis such as these, so that national agencies may be authorized to assume control—and not just supervise—local government operations, according to its president, Bong Inciong.

For now, the Department of Agriculture has employed its own food trucks to buy farm produce from various cooperatives all over the country and deliver these to designated trading centers.