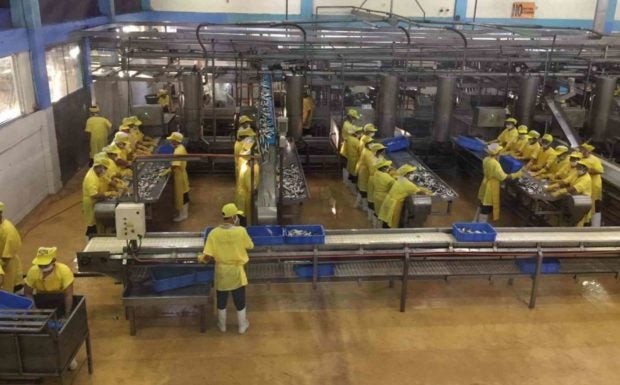 SLOWDOWN Work at the canning factory of Mega sardines in Zamboanga City was in full swing in 2019 but production has now been cut in half amid the lockdown in the city. —JULIE ALIPALA

ZAMBOANGA CITY, Zamboanga del Sur, Philippines — After over a week of trying to stave off a drastic cut in their production, at least two of the 11 sardine canneries in this city have reduced their output by half due to the shortage of workers and fish supply resulting from stringent lockdown rules enforced in this city.

Edgar Lim, president of Industrial Group of Zamboanga Inc. (Igzi), said that since public transport was suspended in the city on March 20, most cannery workers found it difficult to report for work. The city has 11 canneries that supply 85 percent of the canned sardines in the country.

Companies have deployed their own buses to ferry workers, but strictures in the series of barangay checkpoints they must pass through have made it difficult for them to reach the factories.

Lim said the company he manages, Permex Producer and Exporter Corp., which produces the local brand King Cup, has been operating at 50-percent capacity due to shortage of workers.

William Tiu Lim, chief executive officer of Mega Global, which produces the Mega brand, said his factory could only run at 60-percent capacity as its workers could not get through the checkpoints.

CutbacksWith the cutback in daily production targets, the canneries were also forced to reduce their order of fresh fish from fishing fleets.

The 11 canneries churn out 3 million canned sardines a day. Their supply of fresh fish comes from fleets based in the city and in nearby Zamboanga Sibugay and Zamboanga del Norte provinces.

But suppliers from outside the city also felt the pinch of the lockdown as they have to contend with the checkpoints, delaying their deliveries.

The canneries employ just-in-time production systems whereby fresh fish delivered into the factory are canned in a matter of hours. But truck crews of fish haulers were required to go on 14-day quarantine if they come from outside the city; hence, their companies discouraged these cargo trips.