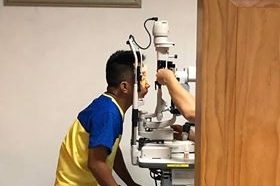 COTABATO CITY, Maguinadano, Philippines —The discrimination against health workers in the front line of the battle against the new coronavirus disease (COVID-19) has become violent

Two persons, a hospital employee in Tacurong City and a nurse of a Cebu City hospital, were attacked and harmed, indicating the worsening incidents targeting front-line health workers.

The St. Louis Hospital based in Tacurong City, in a statement released on Saturday, said that five unidentified men ganged up on one of their personnel and splashed his face with Zonrox, a brand of disinfectant, while he was in front of the public market of President Quirino town sometime around 5 p.m. on his way to work in the city, located some 9 kilometers from the town.

“Outnumbered and alone, he was helpless as these vile individuals splattered Zonrox all over his face, which could have caused irreparable and permanent damage to his eyes,” the hospital statement said. “Fortunately, he was able to run to the hospital where he was given prompt treatment,” the statement said.
The St. Louis authorities said the personnel was a family breadwinner “as many of our front-liners are,” bravely choosing their duties to the communities amid the threats posed by the coronavirus pandemic.

But officials said front-liners remain unfazed by the discrimination that they encountered on a daily basis as a result of the present health emergency.
“We respectfully demand that justice be given,” the hospital officials said. “Instead of discriminating against health workers, to the point of committing unspeakable violence against them, we, as a community should show solidarity with these individuals who risk their lives to ensure that medical services remain unhampered. We heeded the call of duty when others would not,” the hospital statement said.

The incident made other health workers anxious over their safety.

“I have to be in uniform so that I can easily pass checkpoints, but what the St. Louis personnel experienced makes me scared,” a health worker in another hospital in Tacurong City said on Sunday.

The victim’s coworkers said the victim was already fast recovering. He still vowed to continue serving as a front-liner in the fight against COVID-19 but preferred not to return home and stay in the hospital instead.

In Cebu City, a male nurse, who was on his way home, was splashed with chlorine by two unidentified men on board a motorcycle in Barangay Labangon at 8:45 p.m. on March 27. Fortunately, he was only hit in the leg.

The nurse’s superior, a doctor in one of the private hospitals in Cebu City said the nurse, whose identity was withheld for his safety, reported the matter to village officials.
“I am so angry right now. This is unacceptable,” said the doctor who posted details of the incident on her Facebook account on Sunday, March 29.
“People please do not terrorize our health care workers. The COVID-19 is scary enough. No need for additional acts of abuse and vandalism. My nurses are not the virus. They are our warriors in fighting it and helping to keep our patients alive,” she added.

The doctor said the nurse was in civilian clothes when the incident happened as their health workers were required to change out of their uniforms once they leave the hospital.

The attacks heightened the risks faced by front-line health workers not only from getting infected by the virus but also from the public, whose fear for the virus made them a target for discrimination.

Health workers in Iloilo and Negros Occidental have also decried the discrimination faced by doctors, nurses and even hospital janitors who were refused services in eateries, told to vacate their apartments, and were denied rides in buses (before the total lockdown was implemented) for being front-liners in the fight against the coronavirus disease.

On Saturday, Cebu Gov. Gwendolyn Garcia threatened to take legal actions against those who discriminate front-liners, especially people in the health sector.

Garcia issued the warning after receiving reports that a homeowners’ association in a subdivision in Bogo City in northern Cebu planned to submit a petition that sought to prohibit hospital personnel into their place.

Dr. Jaime Bernadas, director of the Department of Health in Central Visayas, urged the public to refrain from hurting those who came in close contact with COVID-19 patients.

Bernadas assured the people that they have sufficient containment protocols around the patients who tested positive for COVID-19. INQ