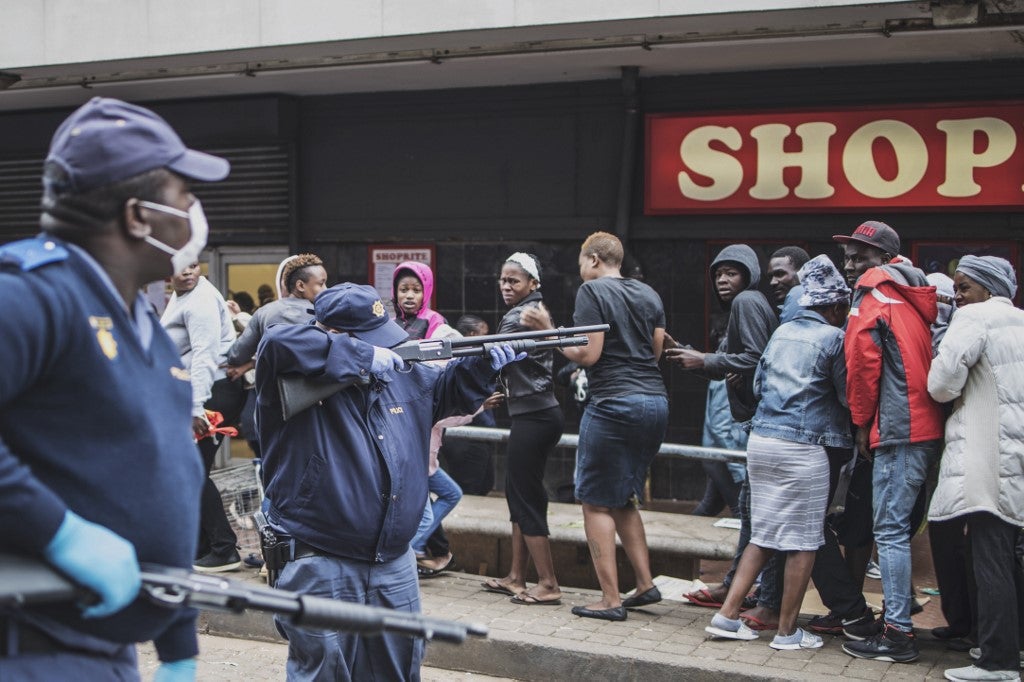 A South African policeman points his pump rifle to disperse a crowd of shoppers in Yeoville, Johannesburg, on March 28, 2020 while trying to enforce a safety distance outside a supermarket amid concern of the spread of COVID-19 coronavirus.  (Photo by MARCO LONGARI / AFP)

JOHANNESBURG — South African police fired rubber bullets towards hundreds of shoppers queueing outside a supermarket in Johannesburg as authorities battled to keep people at home in a bid to halt the spread of the coronavirus.

President Cyril Ramaphosa has ordered a 21-day lockdown for the country’s 57 million inhabitants, deploying police and the military to enforce the restrictions.

But on day two of the nationwide lockdown, the government was struggling to get people to observe the restrictions.

Many in working-class neighbourhoods ventured out to buy food, standing close to each other in lines while waiting for turns to get into grocery stores.

Between 200 and 300 people gathered outside a popular grocery store, early Saturday in Yeoville, a crime-prone area in Johannesburg’s gritty central business district.

Scrambling to secure their spots, many did not observe the recommended safe distance between each other.

Police arrived in 10 patrol vehicles and started firing rubber bullets towards the shoppers.

Startled shoppers trampled on each other and a woman with a baby on her back fell to the ground.

Later the police used whips to get the shoppers to observe social distancing rules.

“So for today, what we have adopted is to do the 1.5 metre distance using the trolleys,” said Lilly Bophela, Alexandra shopping mall manager.

“So as you can see now we are just making sure that people are one meter away using the trolleys”.

While jogging and dog-walking are banned, shopping for food and other basics, but not alcohol, is permitted.

“Our number one concern is to save lives and … to make sure that we slow down … the spread of coronavirus pandemic,” he told a new conference.

Africa’s confirmed cases were Saturday creeping towards 4,000 cases with at least 117 deaths – and governments are scrambling to slow the spread.

Zimbabwe starts a three-week lockdown on Monday, while on the same day Lesotho will also go on a 25-day lockdown.

Elsewhere on the continent, Ghana has announced a two-week lockdown in the country’s two main regions of Accra and Kumasi starting Monday.

The move came as the authorities reported 137 confirmed cases, including four deaths.

President Nana Akufo-Ado said residents would only be allowed to go out to buy food, water and medicines and to use public toilets.

On Saturday the Democratic Republic of Congo sprawling capital, Kinshasa, was meant to go into lockdown for four days, but local officials delayed the measure after the announcement caused a spike in the price of basic goods and worries about unrest.

And in neighbouring Congo-Brazzaville, President Denis Sassou Nguesso declared a health emergency and announced a lockdown in the country, combined with a night curfew, from Tuesday.

He set the length of the lockdown at 30 days, adding in a televised address that the security forces would be mobilised to enforce it.

In the Sahel, Burkina Faso, which last week recorded sub-Saharan Africa’s first death, announced that eight towns, including the capital Ouagadougou, would be quarantined for two weeks from Friday.

In Mali, the government has imposed some anti-coronavirus measures, including a night-time curfew, but said a long-delayed parliamentary election would go ahead on Sunday.