DUBAI, United Arab Emirates  — The head of the United Nations told leaders of the world’s 20 major industrialized nations during an emergency virtual summit Thursday that “we are at war with a virus — and not winning it” despite dramatic measures by countries to seal their borders, shutter businesses and enforce home isolation for well over a quarter of the world’s population. 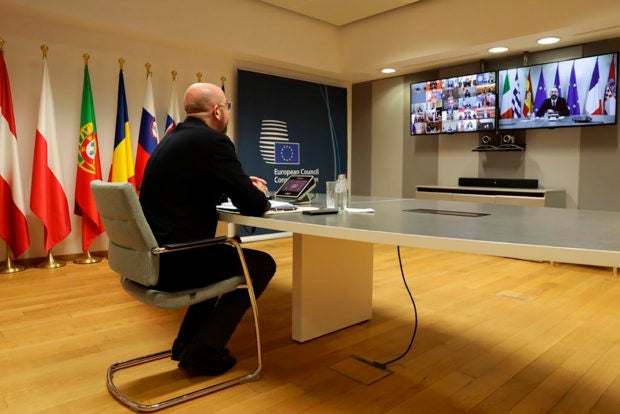 The President of the European Council Charles Michel participates in a video call of world leaders from the Group of 20 and other international bodies and organizations, Thursday, March 26, 2020. The meeting, which lasted about 90 minutes, was chaired by Saudi Arabia’s King Salman, who is presiding over the G20 this year, the purpose was to tackle the pandemic and its economic implications as people lose their incomes amid closures, curfews and lockdowns. (Charles Michel European Council Twitter Page via AP)

The unusual video call in lieu of a physical gathering comes as governments around the world stress the importance of social distancing to curb the spread of the highly infectious virus, which has prompted closures, curfews and lockdowns globally.

The Group of 20 nations, criticized for not taking cohesive action against the virus or its economic impact, vowed to work together and said they are collectively injecting more than $4.8 trillion into the global economy to counteract the social and financial impacts of the pandemic.

In a final statement after the meeting, the G20 said they were committed to strengthening the World Health Organization’s mandate. They said “global action, solidarity and international cooperation” were needed more than ever, but made no specific commitments.

“The unprecedented COVID-19 pandemic is a powerful reminder of our interconnectedness and vulnerabilities,” the group said. “The virus respects no borders.”
U.N. Secretary-General Antonio Guterres urged G20 leaders to adopt a war-time plan to tackle the pandemic.

“This is exponential growth and only the tip of the iceberg,” Guterres said, adding that countries must be able to combine systematic testing, tracing, quarantining and treatment, as well as coordinate an exit strategy to keep it suppressed until a vaccine becomes available.

U.N. spokesman Stephane Dujarric said later that the secretary-general “thought the meeting was an important step in the right direction, but there’s still a long way to go for truly concerted and effective global leadership in response to this pandemic and its impact.”

The WHO director-general, Tedros Adhanom Ghebreyesus, told the G20 leaders: “We are at war with a virus that threatens to tear us apart — if we let it.”

He urged leaders to fight without excuses, without regrets, thanking countries that have already taken steps to fight the pandemic and urging them to do more. He also encouraged leaders to unite, saying no country can fight COVID-19 alone.

Saudi Arabia, which is presiding over the G20 this year, opened the meeting with an urgent appeal by King Salman for the world’s most powerful nations to finance the research and development of a vaccine for the virus.

“This human crisis requires a global response. The world counts on us to come together and cooperate in order to face this challenge,” the Saudi monarch said.

British Prime Minister Boris Johnson announced during the call that the UK was providing additional funding to the Coalition for Epidemic Preparedness Innovations, which is supporting the development of vaccines, bringing its contribution to 250 million pounds ($302 million).

The meeting was not open to the media, and governments and organizations distributed the participants’ comments after it concluded.

In the video call, world leaders like India’s Narendra Modi, Japan’s Shinzo Abe and Canada’s Justin Trudeau, whose wife has contracted the virus, could be seen in little boxes on a screen seated at desks in photos shared on Twitter by European Council President Charles Michel.

President Donald Trump was shown seated at the end of a long conference table in Washington with other American officials in photos shared on social media by the Saudi Foreign Ministry.

“We talked about the problem. And hopefully it won’t be a problem for too much longer,” Trump said about the call. “The United States is working with our friends and partners around the world to stop the spread of the virus.

“We discussed how vitally important it is for all of our nations to immediately share information and data. And we’ve been doing that to a large extent, but we’ll do it even more. Tremendous spirit among all of those countries at 20 countries. … A tremendous spirit to get this over with.”

The meeting also included Chinese President Xi Jinping and German Chancellor Angela Merkel, who was taking part in the summit from her apartment in Berlin where she is in quarantine after a doctor who gave her a pneumonia vaccine had tested positive for the virus. Two tests on Merkel have come back negative, but she’ll still need more tests.

Russian President Vladimir Putin suggested setting up a special fund under the IMF that would offer interest-free loans, and he emphasized the need to create “green corridors” for free movement of supplies and technologies intended to deal with the pandemic. He also proposed a moratorium on sanctions with regard to essential goods.

Putin noted “it’s a matter of life and death,” emphasizing the need to get rid of “political rubbish.”

He did not name any specific country but appeared to refer to U.S. sanctions on Iran, which has been badly hit by the outbreak. Russia has also faced waves of Western sanctions over its 2014 annexation of Ukraine’s Crimea.

Italian Premier Giuseppe Conte, whose country has been hardest-hit in Europe by COVID-19, said the G20 must use all fiscal and monetary policy tools to safeguard economies, “and national responses must be coordinated, enhancing their effectiveness.”

Spanish Prime Minister Pedro Sanchez, whose country has also been hard hit, asked the G20 to work with the WHO and other organizations to do “whatever it takes” to contain the pandemic. He asked for an “unprecedented, robust and large scale” response.

Turkish President Recep Tayyip Erdogan called on G20 leaders to use all available “humanitarian aid financing resources” to help Syrians and other people in war-torn regions, who are most disadvantaged by the outbreak.

“I invite all countries to participate in the fight against this global health crisis in a just manner until all of humanity can breathe easily,” Erdogan said.
The virtual summit additionally included leaders from the World Bank, International Monetary Fund, International Labor Organization and others.
IMF Managing Director Kristalina Georgieva asked G20 leaders for their backing to double the fund’s $50 billion emergency financing capacity. She said vulnerable households and businesses need targeted financial support to stay afloat and get back to work quickly.

“Otherwise it will take years to overcome the effects of widespread bankruptcies and layoffs,” she warned. The IMF has said it stands “ready to deploy” all of its $1 trillion lending capacity, with nearly 80 countries currently requesting help.

Ethiopia’s government told G20 finance ministers in a call ahead of Thursday’s summit that Africa needs a $150 billion emergency financing package due to the impact of the virus.

The global death toll from the virus, which in most cases causes mild to moderate flu-like symptoms but for some, especially the elderly and those with existing illnesses, can lead to pneumonia and death, has climbed past 22,000 and the number of infections has surpassed 480,000, according to a count kept by Johns Hopkins University.

Saudi Arabia has been criticized for rocking oil markets by ramping up production next month and slashing prices to gain market share after Russia refused to extend a production cut agreement. The U.S. has pressed Saudi Arabia to reconsider it’s current strategy.