What you need to know today about the virus outbreak

The number of people around the world who have contracted coronavirus has surged past 500,000, and the United States tops the list, according to a Johns Hopkins University tally. 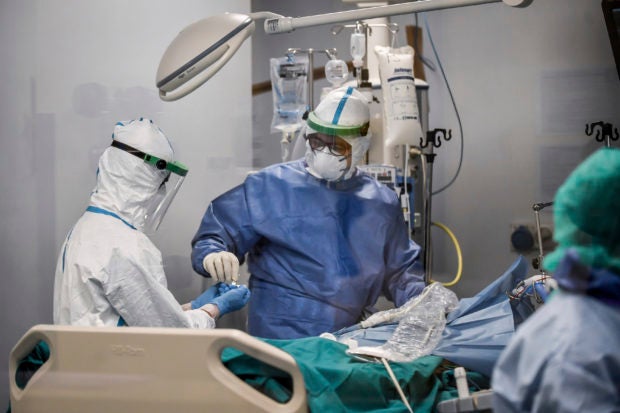 In this photograph taken from behind a window, doctors work on a Covid-19 patient in the intensive care unit of San Matteo Hospital, in Pavia, northern Italy, Thursday, March 26, 2020. The San Matteo hospital is where Patient 1, a 38-year-old Unilever worker named Mattia, was kept since he tested positive for Covid-19 on Feb. 21 and opened Italy’s health care crisis. The new coronavirus causes mild or moderate symptoms for most people, but for some, especially older adults and people with existing health problems, it can cause more severe illness or death. (Claudio Furlan/LaPresse via AP)

That comes as U.S. deaths from the pandemic have now topped 1,100, in another grim milestone for a global outbreak that is taking lives and wreaked havoc on economies and established routines of life. Worldwide, the death toll climbed past 23,000, according to Johns Hopkins’ running count.

Nearly 3.3 million Americans applied for unemployment benefits last week — almost five times the previous record set in 1982 — amid a widespread shutdown caused by the virus. The surge in weekly applications is a stunning reflection of the damage the viral outbreak is inflicting on the economy.

Layoffs are sure to accelerate as the U.S. economy sinks into a recession with revenue collapsing at restaurants, hotels, movie theaters, gyms and airlines.

U.N. Secretary-General Antonio Guterres told leaders of the world’s 20 major industrialized nations during an emergency virtual summit that “we are at war with a virus — and not winning it” despite countries’ dramatic measures to seal their borders, shutter businesses and enforce home isolation for well over a quarter of the world’s population.

Here are some of AP’s top stories Thursday on the world’s coronavirus pandemic. Follow APNews.com/VirusOutbreak for updates through the day and APNews.com/UnderstandingtheOutbreak for stories explaining some of its complexities.

WHAT’S HAPPENING TODAY:
— House Speaker Nancy Pelosi said Congress will give final approval Friday to the $2.2 trillion economic rescue bill, a vote that would cap Congress’ tumultuous effort to rush the relief to a nation battered by the coronavirus. Stocks marched higher for a third straight day Friday as the bill moved closer to passage.

— The coronavirus is taking a growing toll on the U.S. military, and commanders and senior officials are bracing for worse. From nuclear missile fields at home to war zones abroad, from flight lines to ships at sea, the Pentagon is striving to shield vital missions even as it faces urgent calls for help on the civilian front.

— China is temporarily barring most foreigners from entering the country as it seeks to curb the number of imported coronavirus cases. In India, some of the country’s legions of poor and others thrown out of work by a nationwide stay-at-home order began receiving aid from public and private groups working to ensure people have enough to eat.

— Eight countries under unilateral sanctions imposed mostly by the United States and European nations are urging the U.N.’s Guterres to request the immediate and complete lifting of the measures to let them respond to the coronavirus pandemic. In a letter obtained by The Associated Press, the ambassadors from China, Cuba, North Korea, Iran, Nicaragua, Russia, Syria and Venezuela urged the U.N. chief to “reject the politicization of such a pandemic.”

— Facing an unprecedented public health crisis, governors are trying to get what they need from Washington, and fast. But that means navigating the disorienting politics of dealing with an unpredictable president with a love for cable news and a penchant for retribution. Republicans and Democrats alike are testing whether to fight or flatter in an attempt to get President Donald Trump’s attention and his assurances.

— The Trump administration is sticking with its crowd-friendly waiver of entrance fees at national parks during the coronavirus pandemic, as managers at some parks try and fail to keep visitors a safe distance apart and communities appeal for a shutdown at the parks still open. The administration agreed last week to close some parks, including Yellowstone, Grand Teton and the Great Smoky Mountains, after requests from the park managers.

WHAT YOU NEED TO KNOW:
For most people, the coronavirus causes mild or moderate symptoms, such as fever and cough that clear up in two to three weeks. For some, especially older adults and people with existing health problems, it can cause more severe illness, including pneumonia and death. The vast majority of people recover.

Here are the symptoms of the virus compared with the common flu.

One of the best ways to prevent spread of the virus is washing your hands with soap and water. The U.S. Centers for Disease Control and Prevention recommends first washing with warm or cold water and then lathering soap for 20 seconds to get it on the backs of hands, between fingers and under fingernails before rinsing off.

You should wash your phone, too. Here’s how.

Misinformation overload: How to separate fact from fiction and rumor from deliberate efforts to mislead.

ONE NUMBER:
$2.7 billion: Estimated cost of postponing the Tokyo Olympics, according to the Japanese financial newspaper Nikkei. The Tokyo Olympics need new dates for the opening and closing ceremonies in 2021. Nothing much can get done until those dates are determined by the International Olympic Committee, the Japanese government and Tokyo organizers.