Senator under fire for quarantine breach 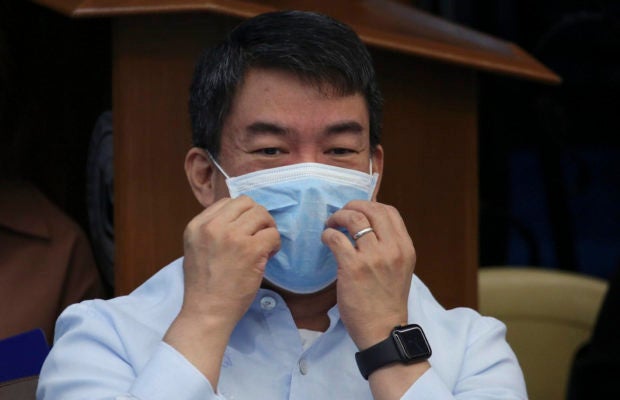 MANILA, Philippines — Sen. Aquilino “Koko” Pimentel III’s excitement over the anticipated arrival of his first child and daughter with his new wife, Kathryna, on Wednesday was doused with scalding criticism from the hospital where she was to give birth and where he said he received confirmation from health authorities that he was positive for the new coronavirus.

Kathryna, who was scheduled for a caesarean delivery at Makati Medical Center (MMC) on Wednesday morning, rejected criticism that she and her husband went into the delivery room together.

Pimentel said he hurriedly left the hospital after the Research Institute for Tropical Medicine (RITM) informed him about the results of his coronavirus test around 9 p.m. on Tuesday.

In a statement, MMC medical director Saturnino Javier denounced Pimentel for breaking the protocol of his self-imposed quarantine while awaiting test results from the RITM when he accompanied his wife to the hospital on Tuesday night and for possibly contaminating some of its critical sections.

One of the quarantine regulations was to not go out in public during a 14-day period of isolation.

As a consequence of Pimentel’s presence at the hospital, several nurses and doctors may be put on quarantine themselves, resulting in a depletion of much-needed manpower, Javier said.

Pimentel went on home quarantine on March 11 after he was “exposed” to Sen. Sherwin Gatchalian, who had earlier announced that he was going to isolate himself after he had gotten in contact with a man who was found positive for SARS-CoV-2, the virus that causes COVID-19.“(My wife) was scheduled to give birth (on Wednesday) morning. I received the call from RITM when I was already in the hospital. Hence, I left immediately,” Pimentel told Senate reporters in a Viber message.

He said he told his wife’s doctor about the test results before informing her.

“Then I left (my wife) in the hospital. I never went inside the delivery room,” he stressed.

“I had to walk out of the hospital. I was not ‘touring’ the hospital,” he said in reaction to some social media accounts saying that he was going around the hospital.

In a text message, Kathryna said she felt “really sad” that some netizens were insisting that she and the senator had gone into the delivery room.

“(My husband) never (went) inside the delivery room,” she said.

Her husband, she added, was not with her during her examination around 8:30 p.m.

“I was alone inside since they told me that my husband or any other person is not allowed (to stay with me). I even took a picture of the examination room during my stress test,” she said.

“I no longer understand why (MMC), given their prestigious name, would insist on a story that is not even true,” Kathryna lamented.

She said the hospital management should just check the security cameras to see who was telling the truth.

But the hospital issued a strongly worded statement against Pimentel.

“We denounce the irresponsible and reckless action of the senator,” Javier said on Wednesday afternoon after word spread on social media about Pimentel allegedly contaminating the hospital.

“He added to the burden of a hospital trying to respond in its most competent and aggressive manner to cope with the daunting challenges of this COVID-19 outbreak. More than anyone else, Mr. Pimentel should have realized the ardent desire of every well-meaning Filipino and every dedicated health-care institution to contain the spread of the infection,” the statement said.

“His admonition for everyone to observe social distancing, enhanced community quarantine measures, washing of hands and personal hygiene are empty rhetoric because he himself violated all those,” it said. “By his actions he contributed no solution. In fact he created another problem for Makati Medical Center, the very institution which embraced his wife for obstetric care.”

He said Pimentel should have stayed at home since he was already considered a person under investigation after exhibiting COVID-19 symptoms since March 14.

“The involved health-care workers have been duly identified, evaluated and will be quarantined, if the risk of exposure warrants it,” he said.

According to Javier, the delivery room complex has been already decontaminated and disinfected and was ready for use.

He reminded elected officials to “really follow what they preach.”

Pimentel’s wife is still at MMC awaiting delivery of their baby.

The senator appealed for understanding and prayers for him and his wife.

He and Kathryna were married in October 2018. They had been told by doctors that they were going to have a girl. He had two sons from a previous marriage.

Pimentel dismissed rumors that he had sought the help of Health Secretary Francisco Duque III after MMC officers refused to accommodate them since the hospital was already full.

“I cannot be in two places at the same time,” Pimentel said. “I talked to Duque (on Wednesday) morning and he just asked me about my situation. By that time, I have already checked my wife in the hospital.”

He also insisted that he was not coughing when he arrived at MMC.

“I’m not spreading droplets so there’s no need to be anxious. I understand the fears, but people should not discriminate because that’s what I am experiencing now,” the senator said.

Pimentel admitted to reporters that he had fever on March 18 and experienced mild cough, slight sore throat and body aches.

“Now my body is back to normal … (I’m having) diarrhea on and off,” he said. “I have quarantined myself upon the doctor’s advice and consistent with the protocol. I feel I am, with God’s help, on the way to recovery.”

In a separate statement earlier on Wednesday, he said that “since the last day of session on March 11 … I had already tried my best to limit my movement.”

“I will call, to the best of my ability, those I remember meeting during those crucial days so that I can inform them of my test result,” he added.

“Shame on you, Koko Pimentel,” said film director and writer Kip Oebanda on Twitter. “You put doctors and the sick in danger. … How can our senators be so callous, irresponsible and self-centered. Disgusting! We will never forget this.”

“Such careless and arrogant behavior is more dangerous than any virus. I join calls for him to apologize and immediately resign,” he added.

Amid the rising number of confirmed cases of COVID-19 in the country, many people have been calling out politicians and their families who have demanded “VIP treatment” and testing ahead of patients with severe symptoms of the disease. —WITH A REPORT FROM DEXTER CABALZA

Read Next
‘Death was so sudden, no time to say goodbye’
EDITORS' PICK
Leveling up your ‘lutong bahay’ with the kitchen companion you never knew you needed
NBI, Immigration to join hunt for ‘underground’ medical clinics
2 Chinese nationals arrested in raid on another unlicensed COVID-19 hospital in Pampanga
SM prepares for ‘safe malling’
Notice of 2020 regular meeting of stockholders June 18, 2020
Duterte approves Metro Manila’s shift to GCQ starting June 1
MOST READ
Duterte approves Metro Manila’s shift to GCQ starting June 1
Bocaue Mayor Joni Villanueva passes away, Sen. Villanueva confirms
Revillame tells Roque: ABS-CBN is in my heart despite being in rival network
NCR is ready for GCQ — Palace
Don't miss out on the latest news and information.