‘Death was so sudden, no time to say goodbye’ 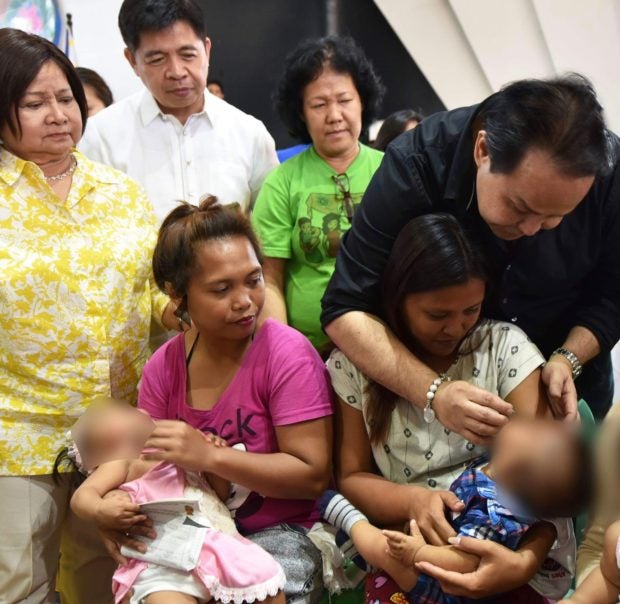 HEART FOR POOR Dr. Marcelo Jaochico (standing second from left), a product of the government’s Doctors to the Barrios program, ensured that medical services would reach the poor. —CONTRIBUTED PHOTO

CITY OF SAN FERNANDO, Pampanga, Philippines — Dr. Marcelo Jaochico, chief of the provincial health office (PHO) in Pampanga, was infected with the new coronavirus disease (COVID-19) when he died of  a cardiac arrest on Tuesday night, his daughter said on Wednesday, citing information relayed by authorities.

But the Department of Health (DOH) said it was still validating his medical condition and had yet to confirm that the 56-year-old doctor had died from the virus.

“I hope my dad [does not become] a statistic [in the fight to contain the virus],” said Cielo, 21, a nurse, told the Inquirer. She had been isolated because she had been exposed to her father.

As PHO head, Jaochico led the training team that prepared 100 health workers in Pampanga on Feb. 5 to handle patients suspected to have been infected by what was then called the nCoV, or novel coronavirus.

As a core member of the provincial disaster risk reduction and management council, he helped design the province’s response plan to COVID-19.

The plan tasks the provincial hospital to handle persons under investigation, or PUIs, and persons under monitoring, or PUMs, to allow district hospitals to accommodate patients with other ailments.

It had not been determined how Jaochico was exposed to the virus. He would be the fourth COVID-19 case in the province.

On March 6, Cielo and her two brothers went out for dinner with their father, who returned home after attending a convention. Cielo said the last time she saw her father was on the evening of March 8.

Although a native of Masantol town, Jaochico lived in Bacolor town, which is closer to the provincial capitol here.

Cielo said she did not have the chance to see her father or provide him comfort in his last hours. “Sobrang biglaan. Walang goodbye (It was so sudden. We couldn’t say goodbye to each other),” she said.

They managed to talk during their last video call on March 18. “Then he stopped replying. His last text was [an instruction] to have his car washed and to give his dog a bath,” Cielo recalled.

She said her father was trying to assure them that everything was normal. The test result was relayed to the family on March 22.

Jaochico’s widow, Rose Anne, a nurse working abroad, could not fly home. The doctor’s body was cremated 12 hours after his death at 6:37 p.m. on Tuesday.

Cielo said the outpouring of condolences and support over social media gave her more insights about her father, who was one of the first to join the government’s Doctors to the Barrios program in the 1990s.

“There was so much I didn’t know about my father,” she said.

Jaochico spent time with his children during summer. “We had to take daylong trips to Cagayan province, then to Apayao province. We crossed rivers, hiked mountains to be with him,” said Cielo, recounting the 16 years when her father served as a municipal health doctor of Calanasan town in Apayao.

In Pangasinan province, a 77-year-old doctor from Bayambang town, who died on March 20, could have been infected with COVID-19 by a “balikbayan” friend, who tested positive and was recovering.

The doctor assisted a medical mission composed of Filipino-American medical workers from Chicago from Feb. 28 to March 1. He was first admitted to Villaflor Doctors Hospital in Dagupan City where he was resuscitated, before he was taken to the Lung Center in Quezon City. A doctor who was part of the team that treated him said the doctor had to be intubated.

The Bayambang government described the local doctor as “a great doctor, father, brother, uncle, ‘lolo’ (grandfather), and friend … [who] lived a life dedicated to public service with his role as the ‘doktor ng bayan’ and advisor to the town’s leaders.”

“I am asking senior doctors to stay at home. They can entrust the job to younger doctors no matter how limited our doctors are right now,” Duterte said.

The Davao government established a network so front-line workers and residents can consult senior physicians by telephone. The telemedicine system uses the Central 911 infrastructure and manpower to allow residents to seek professional medical advice without going to a clinic or hospital.

The system seeks to decongest hospitals of non-COVID-19 and nonemergency cases while at the same time protect patients from unnecessary exposure to the virus. —WITH REPORTS FROM YOLANDA SOTELO AND KARLOS MANLUPIG