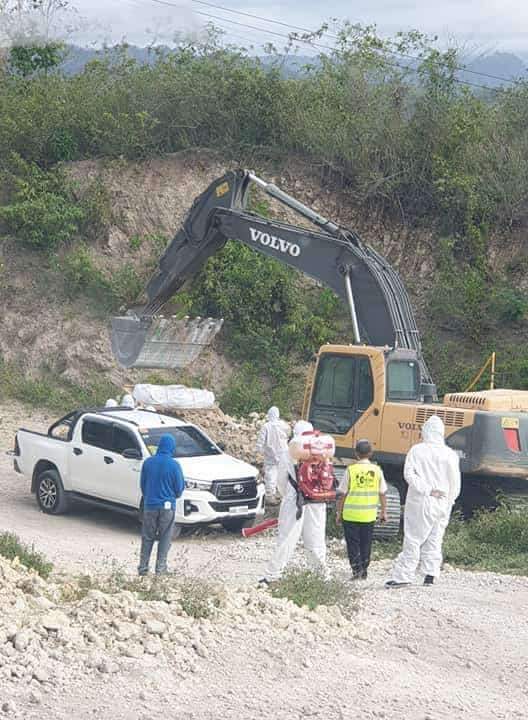 Photo show the burial of a patient from Lanao del Sur around 4 p.m. on Monday in a quarry area owned by the city government in Barangay Bonbonon. The patient died at 2 p.m. on Sunday in a hospital in Iligan City. People suspected the patient for COVID-19 but health authorities kept mum. CONTRIBUTED PHOTO

ILIGAN CITY –– The burial of what people believed was a suspected COVID-19 patient in Bonbonon village here on Monday caused a stir among the people living near the area, who were worried about their health.

The patient from Lanao del Sur, a place with the first confirmed COVID-19 cases in Mindanao, died inside the hospital here on Sunday and was buried past 4 p.m. on Monday at a local government-owned quarry area in Bonbonon.

Although the local government has yet to release information about the burial and the patient’s cause of death, a group of reporters covered the burial from a distance.

Cherryl Tipalan, a resident, said she was worried because the body was buried only a few meters from where her house stood and just along the road where they usually passed.

At least 20 residents tried blocking the road with a mini dump truck and motorcycles to prevent the vehicle from carrying the body from passing to the burial site, but police were eventually able to convince residents to let them pass.

“I was at work when my neighbors called me up and asked me to go home immediately,” Tipalan said in an interview with the media.

“We have to prevent the body to be carried to the place. I am scared that my family will be infected with the virus. I have two little children who have a fever,” Tipalan said in an interview with the media.

She said they were all scared because they might all get infected if the man had COVID-19.

No one from the Department of Health nor the City Health Office, however, cared to talk to them to explain, she said.

Photos of the burial circulated on social media.

Six men on white hazmat suits were seen in the area unloading a cargo wrapped in white plastic from a white pick-up vehicle.

Reporters also saw a yellow backhoe less than a kilometer away filling soil to a hole.

A resident in Bonbonon, who did not want to be named, said he saw the newly dug hole about one meter deep with some pieces of wooden boards prepared nearby.

More than five police vehicles escorted and guarded the burial.

City Health Officer Dr. Cherlina Cañaveral confirmed that the patient was brought to the Adventist Medical Center (AMC) between 9 a.m. to 10 a.m. on Sunday but was declared dead around 2 p.m. on the same day.

She did not give other details about the patient and the cause of death.

Marawi Mayor Majul Gandamra said the patient was in his 30s and from Lanao del Sur.

No result had so far been released as of this posting.