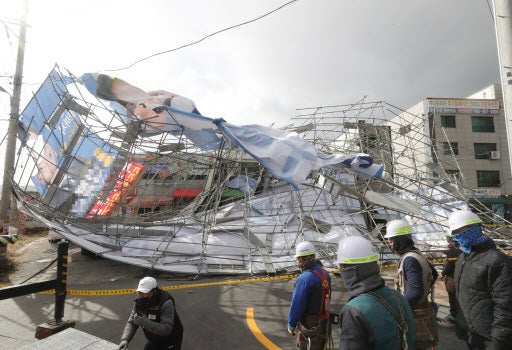 SEOUL — Typhoon-like strong winds battered most parts of South Korea on Thursday, prompting the operations of most of the makeshift coronavirus screening centers in the country to be temporarily suspended.

Wind gusts of up to 90 kilometers per hour, or 25 meters per second, hit much of the country and are expected to continue into early Friday morning in most parts of the country, according to the Korea Meteorological Administration.

The heavy winds have been caused from the gap in air pressure between cold low pressure over North Korea and warm high pressure southeast of the peninsula, the weather agency explained.

Most of the 1,163 drive-through coronavirus testing facilities, where suspected patients can get tested for the virus while remaining in their vehicles, suspended their operations Thursday, according to the Ministry of the Interior and Safety.

A strong wind advisory was issued for the entire country as of 9 a.m., with the advisory upgraded to a warning at noon for most parts of the country including the capital, surrounding Gyeonggi Province, Incheon and Gangwon Province.

It is the first time Seoul came under a high wind warning since the weather agency began to keep relevant records in 1999, it said.

It is rare that such strong winds blow nationwide, but it happens usually once a year because South Korea is situated where high pressure and low pressure meet, an official from the KMA said.

Damage was reported nationwide. In Gyeonggi Province, some three people were transferred to hospitals after being hit by pieces of plastic, glass window and construction structure, respectively, according to fire authorities.

Fires broke out in Seoul and Gangwon Province early in the morning, with the strong winds having made it harder for fire authorities to extinguish the flames.

Around 3:30 a.m., a fire broke out on Suraksan in Nowon district, burning about 660 square meters of forest. It was put out about five hours later, with no casualties reported. An investigation into the cause of the fire is underway.

Another fire was reported in forest in Wonju, Gangwon Province, around 7 a.m., damaging 7,000 square meters of forest. It was extinguished in two hours and caused no casualties.