The number of those who have been infected worldwide by the novel coronavirus continuously grows, since the disease, which originated from Wuhan, China was first identified last December 2019. The World Health Organization already declared the alarming global crisis as a pandemic.

In the Philippines, the national and local government units have been taking preemptive measures to ensure the public’s safety and security amid concerns. President Rodrigo Duterte has approved the imposition of a “community quarantine” in the entire Metro Manila on Thursday, March 12. It was expanded as a Luzon-wide “enhanced community quarantine” on Monday, March 17.

The Department of Health has recorded 15 new cases of COVID-19 as of this writing, bringing the total to 202 cases in the Philippines.

Looking at the brighter side

The DOH also confirmed the fourth case of recovery in the country yesterday, after one of the Diamond Princess Cruise Ship repatriates, tagged as PH25, tested negative twice.

The numbers may be too little compared with other recorded ones, but everyone’s cooperation to abide by the rules and to be proactive individuals could help make a difference.

Two weeks after the virus’s genome sequence was released by China, Filipino scientists at the Philippine Genome Center (PGC) and the University of the Philippines National Institute of Health (UPNIH) developed FDA-approved local diagnostic kits called “GenAmplify” which are expected to be used to fast-track the testing of persons under investigation and the release of confirmatory results in just two hours.

Simple protection measures have been advised to reduce the chances of infections, such as regularly cleaning hands using rubbing alcohol, hand sanitizer, or soap and water for at least 20 seconds to kill viruses. People are also encouraged to trust public officials who are doing their jobs to combat the spread of the virus.

Public health officials called on citizens to practice social distancing and avoid gathering in public places to prevent contagious diseases from spreading. People are advised to try to stay at least 6 feet (about 2 meters) away from each other since the virus is presumed to be mainly spread through droplets that come out of one’s mouth and nose. 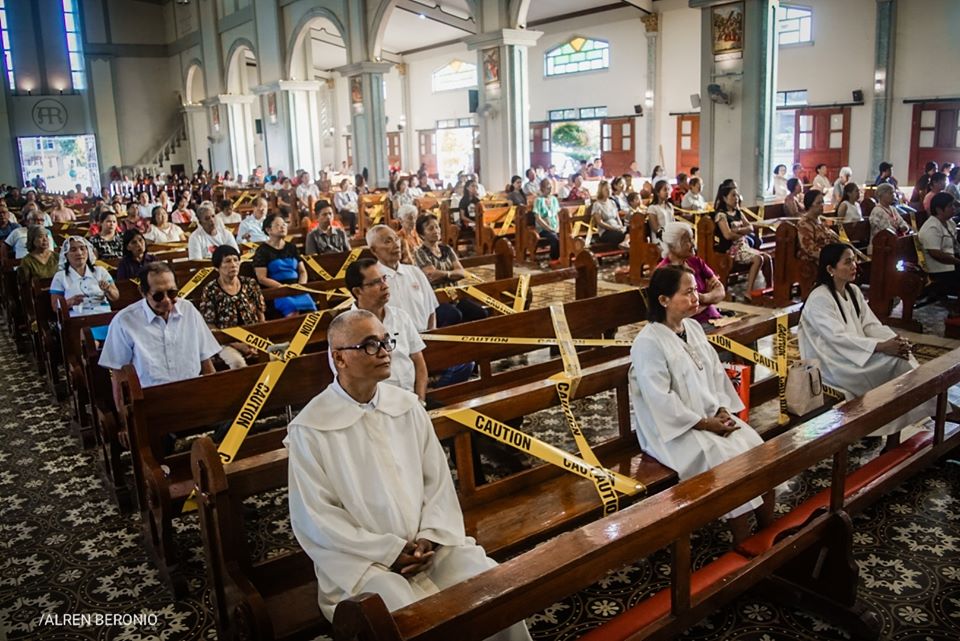 SOCIAL DISTANCING BORONGAN-STYLE. The Diocese of Borongan has put yellow lines on the pews inside churches to ensure that the faithful would be at arms-length of each other. Image: Alren Beronio

The Diocese of Borongan in Eastern Samar on Sunday, Mar. 15, practiced social distancing by putting up yellow lines on the seats inside the church, to ensure that the Catholic faithful would be at arms-length of each other when they attend the eucharistic mass. 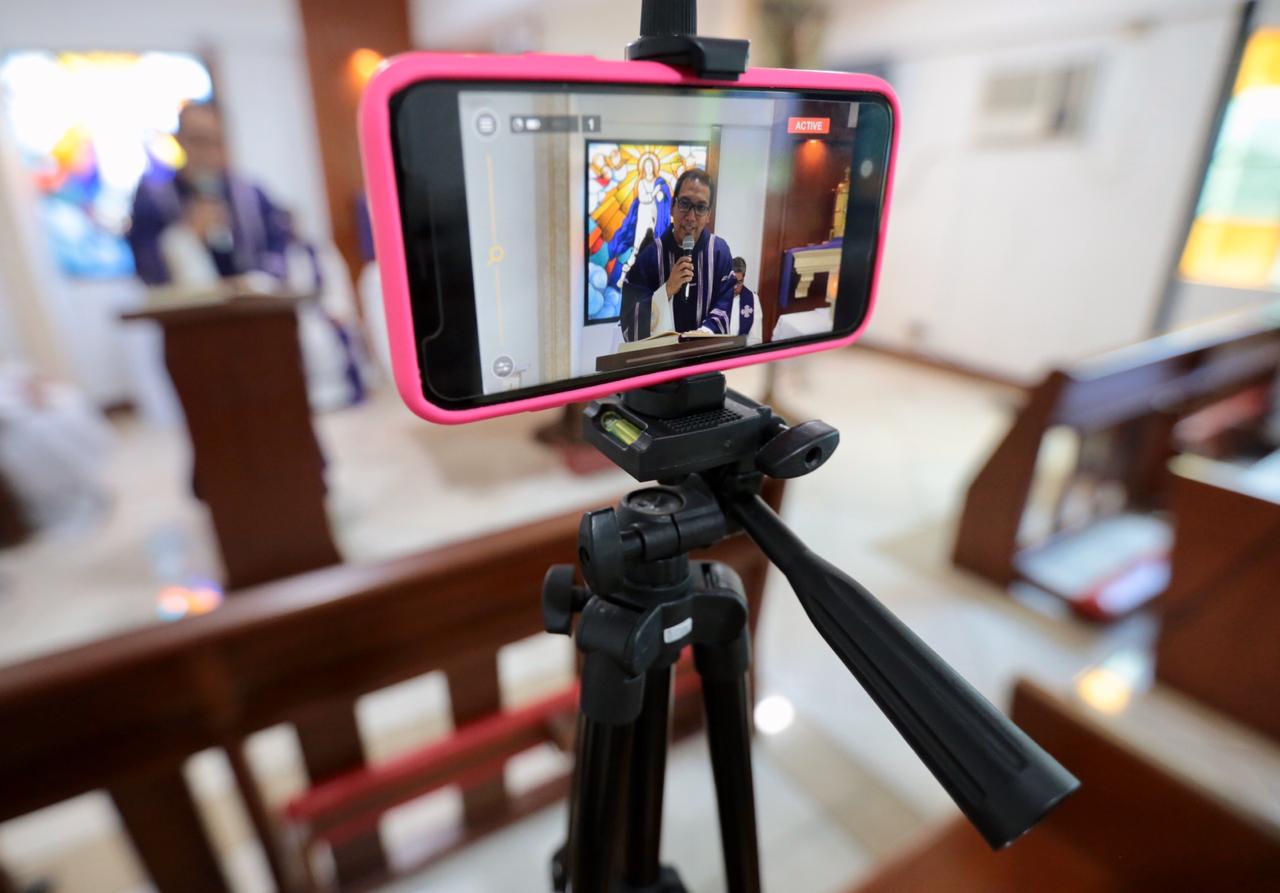 At the San Felipe Neri Catholic School Chapel in Mandaluyong City, Rev. Fr. Hans Magdurulang celebrated the holy mass via live streaming as a precaution to curb the spread of coronavirus.

In Dumaguete City, Negros Oriental, dogs brought good vibes via social media, as they also seemed to practice social distancing while sleeping a few distances away from each other. 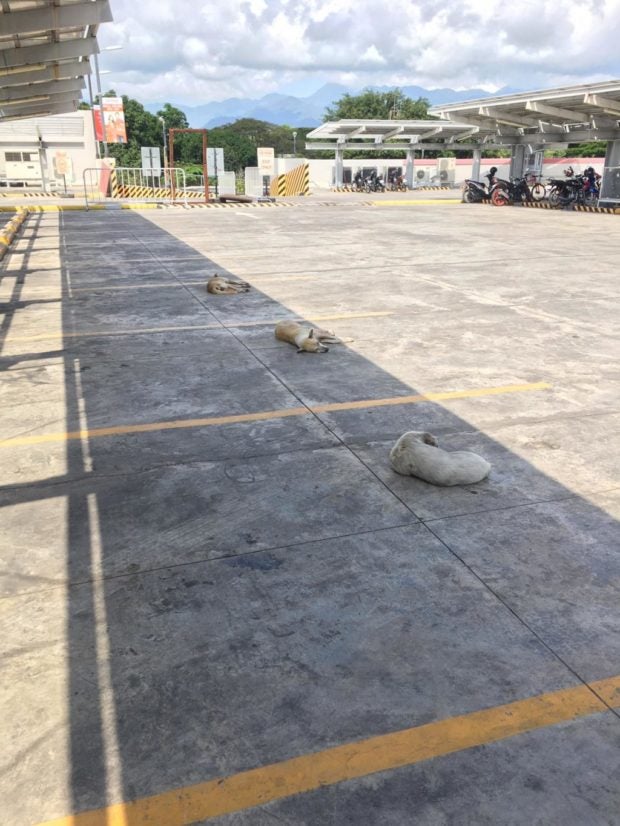 These dogs in Dumaguete City, Negros Oriental seem to practice social distancing as they were caught sleeping a few distances away from each other. Image: Patrick Pinili via Facebook

The crisis may be getting worse, but Filipinos continue to find ways to help each other out to the best of their abilities.

Good-hearted individuals concerned about health workers and frontliners started a donation drive to collect surgical/face masks, N95 masks, alcohol, gloves and raincoats for health care workers, to protect them as they take care of patients afflicted by the illness.

Actress Bela Padilla on Monday, March 16, started a fundraiser, aiming to come up with at least P1 million worth of donations for the welfare of street vendors affected by the 30-day community quarantine in Metro Manila. In a Twitter post, Padilla announced that her crowdfunding initiative had already reached and exceeded its goal in just three days, having raised P3.3 million as of this writing.

Banana Sundae comedienne and actress Pokwang exerted extra effort to make homemade sandwiches paired with drinking water, and gave these out to uniformed personnel amid the “enhanced community quarantine” in Luzon.

Some celebrities also suggested some alternative things people may do at home such as taking a break from social media, reading a book, binge-watching shows and exercising.

READ: How to survive a quarantine? Celebs suggest things to do in Metro Manila during ‘lockdown’

Other artists also help by voicing out appeals for rooms and temporary living spaces for health workers, such as the public calls made recently by musician Bullet Dumas and poet-actor Juan Miguel Severo.

But the effort done by the simplest, unknown citizens can make the most touching impact. On Heaven’s Touch Cuisine, Asturias’s Facebook page, a photo of a certain “Ate Gay” who seem to be the carinderia owner, was shared on Monday, Mar. 26. She was seen preparing breakfast meals for the frontliners of University of Santo Tomas Hospital. The post read, “Serving student meals for [Thomasian] students since 2006-2007. It’s about time for us to give back.”

Serving student meals for thomasian students since 2006 – 2007. It's about time for us to give back.Today's Breakfast,…

Meanwhile, some public officials push to grant cash assistance and recommend the early release of 13th month pay for frontliners in the fight against the disease, particularly for health workers, government employees, and the military and police, among others.

READ: Hontiveros: Give hazard pay to frontliners in fight vs coronavirus

These actions by concerned citizens undoubtedly provide inspiration and comfort despite the chaos. While individuals are taking it upon themselves to do something, and as Filipinos are yet again expected to rise above the challenge, much is still asked from the government in terms of disseminating clear instructions for the public to follow, to allay fears and anxieties. JB