PH quarantine guidelines among the strictest in Asia

MANILA, Philippines — The government on Saturday spelled out its extensive and strict guidelines to implement the month-long “community quarantine” on Metro Manila to prevent the spread of the new coronavirus that causes the acute respiratory ailment COVID-19 but also included a list of exemptions to the travel ban to and from the National Capital Region (NCR) starting on Sunday.

All the measures, if implemented fully, would be among the strictest in place in Asia, and come as European countries and the United States battle to contain a pandemic that has killed more than 5,000 worldwide.

All workers, whether employed or self-employed, would be allowed to enter and leave Metro Manila but must present proof of employment or business here at police or military road checkpoints, according to a memorandum containing the guidelines signed by Executive Secretary Salvador Medialdea.

People from the provinces who will fly out of the country through Ninoy Aquino International Airport will be allowed entry into NCR within 12 hours of their flights, but they must show their travel itinerary at the checkpoints.

But Filipinos would not be allowed to board their planes if they were heading to a country where travel has been banned by the Philippine government.

Also exempted from the restrictions on entering and leaving Metro Manila and other areas under general community quarantine are health workers, authorized government officials, those traveling for medical or humanitarian reasons, persons providing basic services or work in public utilities, and those who are part of the essential skeleton workforce.

All persons leaving a contained community must first be checked for symptoms of COVID-19 before passing through exit points.

Health authorities would issue a certification and endorse the exiting persons to the local government where they are headed. These persons must also undergo a 14-day home-based quarantine.

The movement of cargo to and from NCR and other areas under community quarantine would be unhampered.

The memorandum prohibits “mass gatherings,” which is defined as “a planned or spontaneous event where the number of people attending the event could strain the planning and response resources” of the local government concerned.

Essential work-related meetings and religious activities may continue as long as strict social distancing is observed, meaning there should at least be a one-meter separation between and among those attending.

Classes and school activities at all levels would be suspended until April 14. But education officials should provide adequate arrangements to allow students to continue fulfilling their academic requirements.

The executive branch will implement alternative work arrangements, including work from home, compressed work week, staggered work hours and the creation of a skeleton force.

But members of the police, military, Philippine Coast Guard and those providing health and emergency frontline services will continue performing their duties. 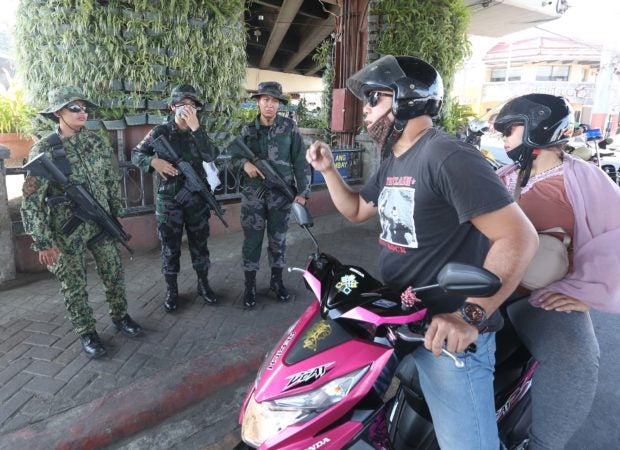 Malacañang encouraged the legislature and judiciary to adopt this policy. It also urged the private sector to adopt flexible work arrangements.

All manufacturing, retail, and service establishments are advised to remain open.

Overseas Filipino workers will be allowed to travel to mainland China except to Hubei, the province where SARS-CoV-2, the virus that causes COVID-19, originated. They must first execute a declaration stating that they know the risks involved.

Travelers from Iran and Italy are required to present a medical certificate which they must obtain from a competent Iranian or Italian authority 48 hours before their flight to the Philippines showing that they tested negative for SARS-CoV-2.

This would not apply to Filipino citizens, their foreign spouses and children, holders of permanent resident visas, and holders of diplomat visas issued by the Philippine government.

The Department of Health (DOH) is authorized to grant exemptions, based on humanitarian considerations, for travelers going to countries or territories where travel restrictions are in place.

Those who do not follow the guidelines may face charges.

“To limit the spread of the virus, we need to limit the movement of people,” said Jose Arturo Garcia, general manager of the Metropolitan Manila Development Authority.

Some of the capital’s residents flocked to bus stations and airports ahead of the travel ban.

Despite some concerns, senators called on the public to abide by the government’s extensive guidelines.

He said the Quarantine Act of 2004, or Republic Act No. 9271, was silent on the movements of persons in the streets and only covers domestic and international seaports and airports.

“Hence, law enforcement authorities may not be legally equipped to conduct arrest unless local ordinances are available for its enforcement,” Lacson said in a text message.

Senate President Vicente Sotto III said in a radio interview that the travel restrictions would have to be balanced given that Metro Manila borders several provinces.

Implementing land travel restrictions would be problematic and could cause a lot of inconvenience, especially during checking of the ID and body temperature of each individual entering or leaving the metropolis, Sotto said.

He also expressed concerns about the planned curfew in Metro Manila during the monthlong community quarantine. He asked how would people who work through the night, such as taxi drivers and vendors, earn a living during the nine-hour curfew.

“Let’s be careful that the cure is not worse than the disease,” he said.

—With reports from the wires