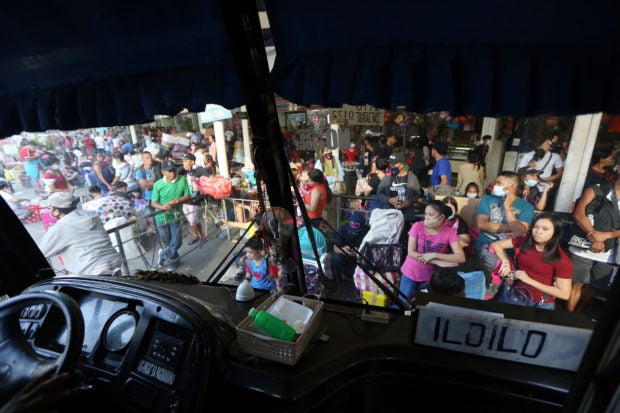 EVE OF QUARANTINE Hundreds of passengers wait for the next ride out of Metro Manila at Araneta Bus Terminal in Cubao, Quezon City, on Saturday, a day before a “community quarantine” is imposed on the National Capital Region to contain the spread of the new coronavirus. —NIÑO JESUS ORBETA

MANILA, Philippines ֫— Last Thursday, President Rodrigo Duterte announced a lockdown in Metro Manila from March 15 to April 14, suspending classes and work in government offices (except for a skeleton staff), together with domestic land, air and sea travel in and out of the capital. Local government executives were given the power to declare similar lockdowns for provinces, cities and towns, and villages.

Adverse public reaction was swift and the government has since backpedaled, now using the term “community quarantine” but the description of enforcement still sounds like a lockdown.

Accompanying the modified term “community quarantine” have been all kinds of proposals, none of which seem to be official yet mainly allowing exemptions such as media, people needing medical care and people who work in Metro Manila and live outside (and vice versa) to move in and out of the National Capital Region.

The model here is clearly China, which first imposed a lockdown in January, for the city of Wuhan, where the epidemic began, which was then extended to the entire province of Hubei with a population of more than 50 million. Less restrictive lockdowns have been imposed on other major urban centers including Beijing and Shanghai so that currently, some 500 million people live in various forms of lockdown in China.

That kind of lockdown is unprecedented and would have been possible only in a country like China. I am referring not just to an authoritarian government but also to its highly collectivized culture, where the battle against COVID-19 has been transformed into a patriotic duty. Only with that mindset could it have been possible to have widespread cooperation (but not without resistance) to handle mind-boggling logistics around provision of food, medical supplies and other essentials as well as continuing services from street cleaning to schools shifting to online learning systems.

Did China’s restrictions make a difference?

Using a computer modeling program, a study published last March 5 in the journal Science found that China’s stringent travel restrictions for Wuhan did more for the world than for China. Because the ban on travel happened only a month after the outbreak began, many infections had already spread to other parts of China, so the lockdown slowed down the domestic epidemic by only three to five days. To China’s credit, the restrictions did slow down global spread by a few weeks.

The findings then are not encouraging for the Philippines, but with the government intent on pushing through with this community quarantine, we will have to hope that it is at least implemented properly, and this is where I have several concerns.

First and foremost, the community quarantine has to be implemented consistently. I foresee too many “exemptions” to the rules (if and when they are issued) including on-the-spot ones, due to overwork, negligence, political connections and outright bribery at the checkpoints.

Paradoxically, for this COVID-19 quarantine, we may have to worry about laxity on one hand and, on the other, an arbitrary, if not paranoid, expansion of lockdowns because local government officials are allowed to impose additional quarantines at the provincial, city/town, and even barangay levels, if there are two infections confirmed within their jurisdiction.

Unless we get clearer guidelines for implementing this COVID-19 quarantine, we are opening the doors to too many confusing quarantines, abuse and extortion, especially with the Philippine National Police already asking to be authorized to arrest violators of the travel restrictions.

We should be looking at other models for responding to the epidemic such as South Korea’s massive and reliable testing, which should be the basis for quarantine. I am thinking of our own experience at the University of the Philippines (UP) where we have been waiting for more than a week now for test results of two professors who may have been exposed to the virus on an overseas trip. These delays in test results can mean prolonged quarantines within the community. Fortunately, UP researchers have developed a new test kit, which can be rolled out next week and make testing faster and more reliable.

Going back to the study on China’s lockdown, the authors conclude that travel restrictions work only within a limited time after the infections emerge. They note that such restrictions will “have a modest effect unless paired with public health interventions and behavioral changes that achieve a considerable reduction in the disease transmissibility.”

Translation: more than a community quarantine, we need to intensify public education to counter the misinformation and rumors and to highlight what works against the virus: frequent handwashing, use of disinfectants, social distancing. I hear people fretting about the “correct” distance, but don’t think twice about meeting up with the neighborhood “barkada,” which will increase as we see more idle people because of school and work suspensions.

And of course, we shouldn’t forget to intensify campaigns to encourage self quarantine and medical attention for people who may have been exposed.

The government will have to explain, in the days ahead, that the number of new infections will rise even more rapidly than in the past because the outbreak is taking off now, and testing is done more intensely. Even as this happens, the country must be ready to provide, promptly and adequately, services for the growing numbers of patients, and their families.

I worry most about lockdowns becoming lockouts, pitting people and communities against each other, and eroding the already low trust levels we have for the government and in each other. Lose that trust and we lose to the virus.

Michael L. Tan is an Inquirer columnist, a medical anthropologist and professor at the University of the Philippines.