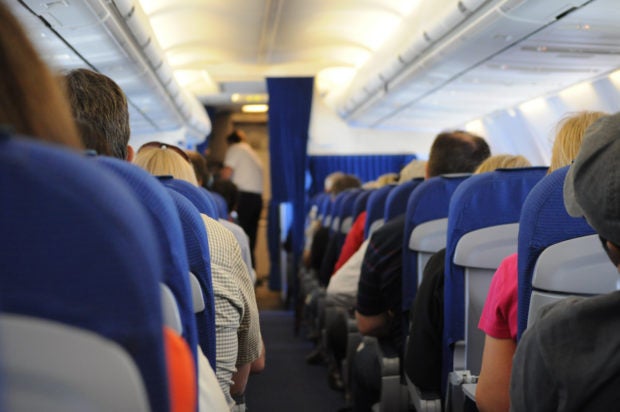 A plane passenger was put in a headlock by a male cabin crew after getting aggressive and coughing on a staff member while waiting to be let out in an airport in China.

The Chinese woman was apparently upset about the coronavirus check being conducted on the plane, which was said to take as long as six to 10 hours. The Thai Airways plane arrived at the Shanghai Pudong Airport in China on March 6 from Bangkok, Thailand, according to Newsflare. The report stated that the footage of the incident it posted was filmed on the same day.

After a few hours of waiting, the passenger called one of the aircraft’s staff, demanding to be let out. The woman then began swinging her arms and deliberately coughing on a female staff until the male cabin crew came.

The male cabin crew restrained the aggressive passenger until he was assisted by others who urged the woman to “stay down.” The man also asked for handcuffs. Six cabin crew helped restrain the woman until she calmed down without being handcuffed, as per report.

The airline company responded to the incident and said that the commotion was caused by the aggressive passenger.

”Thai Airways was informed at Shanghai Airport that there were measures to screen passengers with a history of [traveling] from risky countries such as Italy, South Korea, Japan and Iran,”  the vice president of Thai’s aviation safety department, flight lieutenant Prathana Pattanasiri, was quoted as saying.

”We could not open the doors of the plane until instructed to and health officials came to proceed with checks. [Therefore,] Thai Airways had to wait for seven hours before officials arrived at the inspection queue,” the airline official said.

The passenger calmed down after the situation was explained to her. She agreed to wait until the screening was over, the airline’s spokesperson explained further.

The passengers were eventually let off the plane, as per report. They went through the COVID-19 health check for air travelers who came from risky countries. Cha Lino/JB