OAKLAND, Calif.  — The cruise ship forced to idle for days off the coast of California because of a cluster of novel coronavirus cases aboard arrived in port Monday as state and U.S. officials prepared to transfer its thousands of passengers to military bases for quarantine or return them to their home countries. 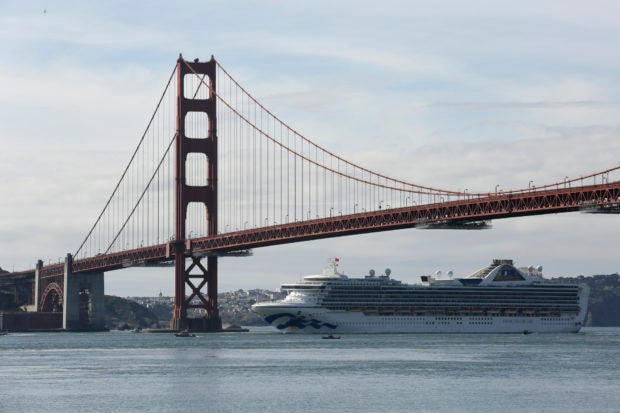 The Grand Princess cruise ship passes beneath the Golden Gate Bridge in this view from Sausalito, Calif., Monday, March 9, 2020. The cruise ship carrying over a dozen people infected with the coronavirus passed under the bridge as federal and state officials in California prepared to receive thousands of people on the ship that has been idling off the coast of San Francisco. (AP Photo/Eric Risberg)

The Grand Princess pulled into the Port of Oakland with more than 3,500 people aboard — 21 confirmed to be infected with the new virus. Passengers lining the balconies waved and some left the cabins where they had been in isolation to go onto deck as the ship entered the port near San Francisco.

As it pulled under the Golden Gate Bridge, passenger Karen Schwartz Dever said “everyone was hollering and clapping as we entered the harbor.”

Workers wearing gloves and yellow protective gear placed a large tent by a platform that passengers will use to disembark. At least 20 buses and five ambulances were parked nearby, and officials have said those needing acute medical care for any reason will get off first.

The unloading will take up to three days, officials have said. How many travelers will get off the ship Monday wasn’t clear.

U.S. passengers will be flown or bused from the port — chosen for its proximity to an airport and a military base — to bases in California, Texas and Georgia for testing and a 14-day quarantine. The ship is carrying people from 54 countries, and foreigners will be whisked home.

About 1,100 crew members, 19 of whom have tested positive for COVID-19, will be quarantined and treated aboard the ship, which will dock elsewhere, California Gov. Gavin Newsom said.

The vast majority of people recover from the new virus. According to the World Health Organization, people with mild illness recover in about two weeks, while those with more severe illness may take three to six weeks to recover. In mainland China, where the virus first exploded, more than 80,000 people have been diagnosed and more than 58,000 have so far recovered.

In an effort to stop the virus’ spread, Italy will impose travel restrictions and other strict public health measures nationwide starting Tuesday. And a combination of coronavirus fears and plunging oil prices sent stocks on Wall Street plummeting Monday.

The virus has infected 600 people in the United States — including the director of the agency that runs the airports in New York and New Jersey — and at least 26 have died, most in Washington state. U.S. Surgeon General Jerome Adams said communities will need to start thinking about canceling large gatherings, closing schools and letting more employees work from home, as many companies have done after an outbreak in the Seattle area.

Several universities have begun online-only courses, including the University of Washington, Stanford University and Columbia University.

The largest school district in Northern California, with 64,000 students, canceled classes for a week when it was discovered a family in the district was exposed to COVID-19.

Georgia’s fourth-largest school district, which has more than 93,000 students, closed its schools for at least one day after a teacher at two middle schools was confirmed to have coronavirus.

The Grand Princess had been held off the coast since Wednesday because of evidence that it was the breeding ground for infections tied to a previous voyage.

Passengers from the previous voyage have tested positive in California and other states. Six Canadians who were on the Grand Princess from Feb. 11 to 21 were also confirmed to have the virus.

Current passenger Laurie Miller, of San Jose, said she and her husband were told that anyone who was getting off Monday had already received a written notice and luggage tags.

“Not us!” she said in a message. “This is an absolute circus.”

The California governor and Oakland mayor sought to reassure people that none of the cruise ship passengers would be exposed to the public before completing the quarantine. Officials were trying to decide where the ship and its crew would go next.

“That ship will turn around — and they are currently assessing appropriate places to bring that quarantined ship — but it will not be here in the San Francisco Bay,” Newsom said Sunday.

The State Department warned against travel on cruise ships because of “increased risk of infection of COVID-19 in a cruise ship environment.”

Another Princess ship, the Diamond Princess, was quarantined for two weeks in Yokohama, Japan, last month because of the virus. Ultimately, about 700 of the 3,700 people aboard became infected in what experts pronounced a public health failure, with the vessel essentially becoming a floating germ factory.