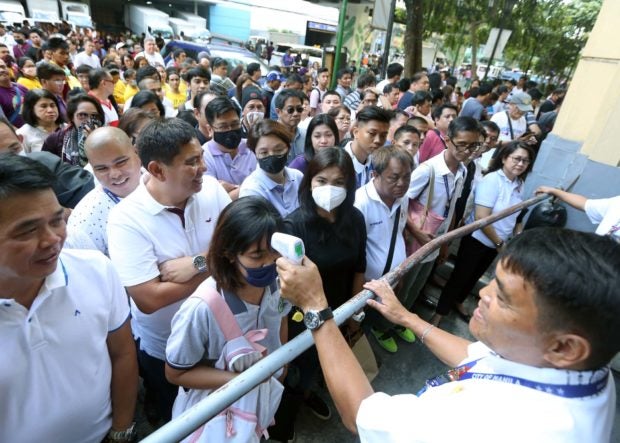 LONG LINES Visitors and employees entering Manila City Hall have their body temperatures checked as the number of people with COVID-19 rose to 20 on Monday. —MARIANNE BERMUDEZ

MANILA, Philippines — President Rodrigo Duterte on Monday placed the entire Philippines under a state of public health emergency as the number of confirmed coronavirus cases in the country doubled overnight to 24 and the Department of Health (DOH) admitted it had limited capacity to test for infections.

On the recommendation by the DOH, Duterte signed Proclamation No. 922, directing all government agencies and local governments to cooperate with and assist the health agency in eliminating the threat posed by SARS-Cov-2, the coronavirus that causes the pneumonia-like disease COVID-19.

The declaration states that the health secretary may call upon the Philippine National Police and other law enforcement agencies to deal with the new coronavirus, which emerged in China in late December and has since spread to 103 countries and territories.

It also calls on the public, including foreign tourists in the country, to comply with government directives.

The declaration will remain in force until withdrawn by the President. On Monday night, Duterte called off classes in schools at all levels in Metro Manila up to Saturday in a bid to prevent the spread of the coronavirus.

Duterte reached the decision after a meeting with Metro Manila mayors in Malacañang where he also announced that the number of local infections had risen to 24 from 20 earlier Monday.

He said the suspension of classes was requested by the mayors and that officials would check if the number of cases would go down after the shutdown of schools.

But he said Education Secretary Leonor Briones wanted the students to stay at home and study during the suspension.

She does not want their studies interrupted, Duterte said.

The police would serve as truant officers who would cite students going out and return them to their parents, he said.

“We place the responsibility for that on the barangay captain, and the enforcement would be on the police,” Mr. Duterte said.

The President rejected the suggestion to put Metro Manila on lockdown to contain the spread of the virus.

“We have not reached that kind of contamination,” he said.

With the emergency declaration, the DOH has acquired more powers to tackle the coronavirus that has killed 3,819 people and sickened 109,946 others across the globe.

Speaking to reporters in Malacañang on Monday, Health Secretary Francisco Duque III said the declaration would allow the DOH to impose mandatory quarantine to prevent the spread of the coronavirus and mandatory reporting of cases, implement travel restrictions, and freeze the prices of certain goods.

The declaration would also make it easier for government agencies, specially local governments, to access funding needed to fight the disease.

It would also ease and streamline the procurement process for battling the coronavirus.

As for calls to put Metro Manila on lockdown, Duque said this was premature as there was no sustained transmission of the virus.

Duque also called on hospitals equipped to handle coronavirus cases not to refuse admission to people with symptoms of the illness.

Until late Sunday, the Philippines had 10 confirmed cases of the coronavirus, including three Chinese nationals who vacationed in the country. One of the three died, while the other two had recovered and had returned to China.

By Monday, however, the DOH reported 10 more confirmed cases—all Filipinos.

Later on Monday four more cases were confirmed, with President Duterte announcing the new infections at the Palace.

Four of the patients recently traveled to a country with infections, while two had close contact with a known coronavirus patient.

The three other patients did not travel abroad nor were in close contact with any of the confirmed cases. The DOH is still trying to determine how one of the 10 new cases contracted the virus.

In explaining the doubling of cases in the country, Assistant Health Secretary Maria Rosario Vergeire said it was the result of the DOH’s “heightened surveillance” for the virus, which emerged from a wildlife market in Wuhan city in central China’s Hubei province last December.

In spite of the doubling of cases, Vergeire stressed that there is still no community transmission of the virus in the Philippines.

“The main determinant for us to say that there is community transmission is if the cases are no longer linked to each other. That’s why we are looking into these cases to see if there are linkages among all these positive cases that we have,” Vergeire said.

“Once we see that there is even just one that has no link to the 20 cases, then this will trigger the declaration of sustained community transmission,” she added.

In Malacañang, Duque said the DOH had a limited supply of test kits, but the government was looking to acquire more from China.

At a hearing in the Senate on Monday, the Research Institute for Tropical Medicine’s Rosanna Ditangco said the DOH had only 2,000 test kits and that the agency had asked for the release of P43 million to buy “various needs.”

DOH medical specialist Alethea de Guzman said the World Health Organization would send 4,500 more “extraction kits,” but these would be enough for only 2,000 individuals.

Sen. Nancy Binay, who presided over the hearing, said the admission of De Guzman and Ditangco showed why the news about the sudden rise in the number of confirmed coronavirus cases triggered widespread worry and misinformation.

“I don’t want to panic, but you’re making me panic. From what we have heard right now, it seems you did not prepare for the local transmission [of the virus],” Binay said.—With reports from Marlon Ramos and AFP