NEW YORK  — Video showing New York City police officers arresting a young black man sparked outrage and elicited questions about the amount of force used to make the arrest in a city where mistrust of police remains high more than five years after Eric Garner’s death from an officer’s chokehold. 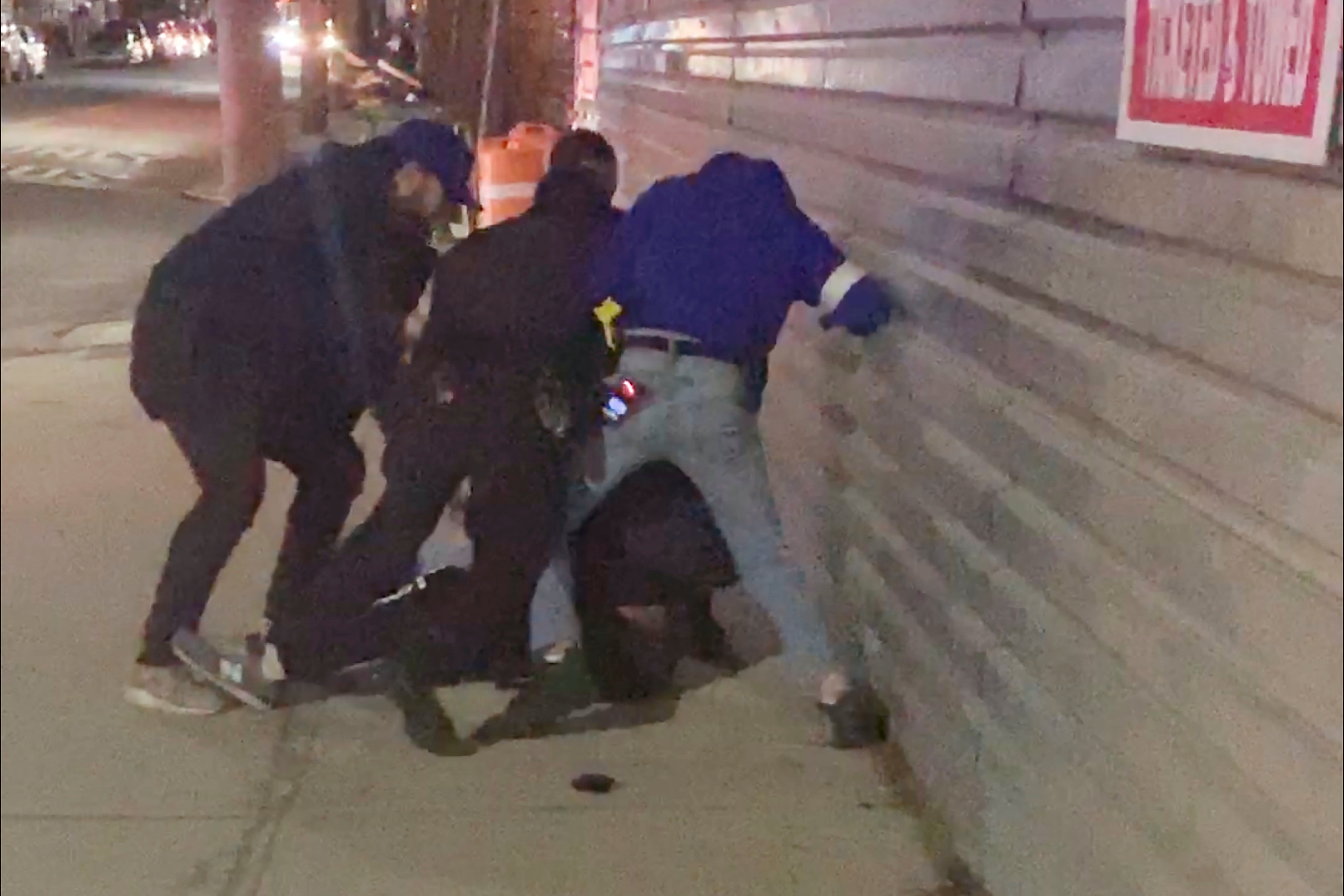 In this image made from video, New York City police officers forcefully arrest 20-year-old Fitzroy Gayle in the Brooklyn borough of New York, Wednesday, March 4, 2020. The widely distributed video sparked outrage and elicited questions about the amount of force used to make the arrest in a city still dealing with mistrust over the 2014 police chokehold death of Eric Garner. (AP Photo/User Generated Content)

Fitzroy Gayle, 20, pleads for help in the video, recorded by a woman who then tweeted it, as several officers wrestle him into submission Wednesday evening on a Brooklyn sidewalk. When Gayle asked a lone plainclothes officer why he was being stopped, the officer did not appear to answer before uniformed backup rushed in.

“This was painful to watch,” Mayor Bill de Blasio tweeted. “We still need to get all the facts about this case and a full investigation is underway, but I don’t like what I saw. It doesn’t reflect what we’re building in New York City.”

The city’s largest police union responded on Twitter, calling de Blasio’s remarks “anti-police rhetoric” and accusing him of “inflaming the situation” with a rush to judgment.

The man in the video had fled officers who approached him and another man as they were smoking marijuana in a park around 7 p.m., Shea said. The officers were responding to an automated alert to gunshots, Shea said. Both men were later apprehended, but there is no indication they were linked to the gunfire, he said.

Gayle was arrested and charged with resisting arrest, obstructing governmental administration and marijuana possession. The second man, whom police have not identified, was issued a summons. The episode is under internal review.

Shea said there were “some disturbing points” to the video.

One of the officers could be seen standing on the man’s ankle, he said, offering a possible explanation for why Gayle screamed during the scrum.

Photos of Gayle taken after the arrest showed abrasions to his knee but no apparent injuries to his face or upper body, the commissioner said.

“The end is what concerns me,” Shea said.

A better outcome would have seen officers approaching the men followed by “discussion and no running” from police, he said. “No physical resistance at all. No arrest needed.”

Gayle’s lawyer, Sanford Rubenstein, said the video demonstrates “that the era of stop and frisk is not over in New York City. The police officers involved in this brutal assault must be brought to justice.”

Rev. Kevin McCall, a civil rights activist in Brooklyn, said Gayle’s family was calling for District Attorney Eric Gonzalez to open his own investigation into the officers’ conduct. McCall also said Shea should suspend the officers.

The arrest came on the heels of renewed spotlight on stop, question and frisk, a policing strategy once championed by former Mayor Mike Bloomberg, who expressed regret for its overuse as he launched his now-suspended campaign for the Democratic presidential nomination.

At its peak, stop and frisk resulted in millions of police stops of mostly black and Hispanic New Yorkers. A federal judge ruled the practice as unconstitutional in 2012, and the city drastically decreased its use the following year.

Black people and non-white Hispanic people were 88% of those stopped and 90% of those frisked, and 88% of those against whom force was used, according to an analysis by the New York Civil Liberties Union. The organization said the data did not indicate a significant increase in stop and frisk activity.

About 66% of the 2019 stops resulted in neither an arrest nor a summons.

Video clips of Wednesday night’s arrest had been viewed or shared millions of times on Twitter and was the latest episode in recent months to spark outrage about perceived overuse of force or unjust arrests by police.

In October, bystander video showed a white police officer punching a black teenager during a brawl on a Brooklyn subway platform, leading hundreds of people to march in protest.

A few weeks later, officers were accused of pulling their guns on a group of black trick-or-treaters on Halloween in Brooklyn and detaining three of them for several hours. In November, officers detained two women for selling churros without a license at subway stations, sparking backlash on social media after a video of one of the encounters went viral.

Last August, the police department fired the officer whose chokehold led to Garner’s dying gasps of “I can’t breathe,” a mantra that gave voice to a national debate over race and police use of force.

Video of the confrontation between Garner, who was black, and the white officer drew outrage and was viewed millions of times.