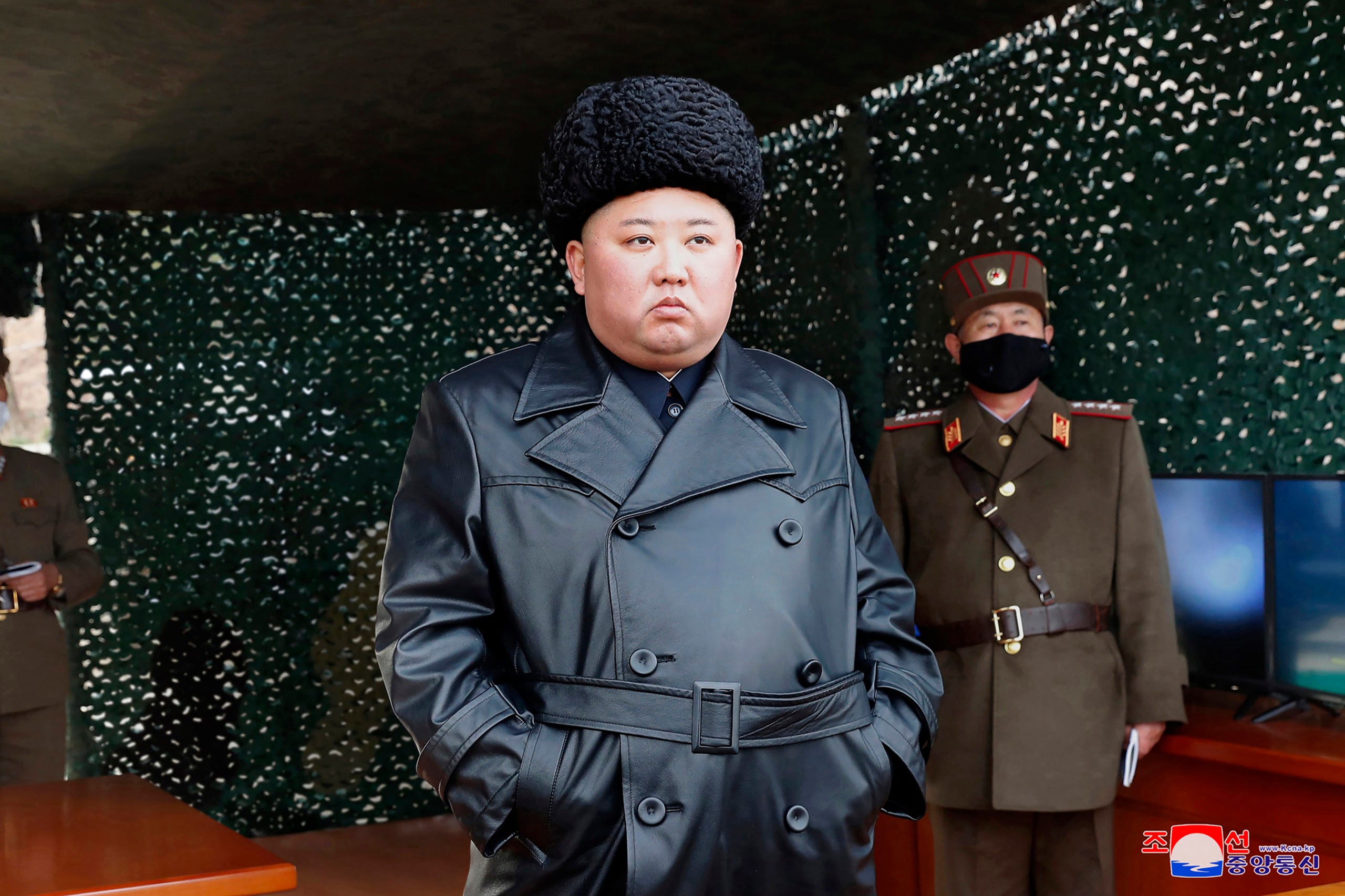 In this Monday, March 2, 2020, photo provided by the North Korean government, North Korean leader Kim Jong Un inspects a military drill at an undisclosed location in North Korea. Independent journalists were not given access to cover the event depicted in this image distributed by the North Korean government. The content of this image is as provided and cannot be independently verified. Korean language watermark on image as provided by source reads: “KCNA” which is the abbreviation for Korean Central News Agency. (Korean Central News Agency/Korea News Service via AP)

The images in the Rodong Sinmun newspaper included pictures of multiple launch rocket systems and several of a larger caliber rocket being fired from a launcher in a forest.

The exercise came as the North battles to prevent a coronavirus outbreak but Kim — wearing a black leather greatcoat and gloves, and a bushy Russian-style hat — did not don a facemask to supervise the firing, although an officer accompanying him had a black covering over his mouth.

Kim expressed “great satisfaction” with the results, telling the troops to keep in mind “the iron will and ardent patriotism to defend as strong as an iron wall the socialist homeland dearer than their own lives” the official KCNA news agency reported.

South Korea said that Monday’s launch appeared to be two short-range ballistic missiles — which the nuclear-armed North is banned from testing under UN Security Council resolutions.

The South Korean military said two devices were fired eastwards over the sea from the Wonsan area on the North’s east coast and flew 240 kilometers (150 miles) at a maximum altitude of 35 kilometers.

The North also appeared to be carrying on a firing drill that began Friday, it added.

Pyongyang was seeking to “normalize” tests of new weapons by firing them alongside existing systems and “framing it simply as an extension of rocket artillery drills”, said Joseph Dempsey of the International Institute for Strategic Studies.

The nuclear-armed North carried out a series of tests last year it often described as multiple rocket launch systems, and which were repeatedly played down by US President Donald Trump.

Monday’s drills came days after the one-year anniversary of the collapse of the Hanoi summit, after which nuclear negotiations have been at a standstill over sanctions relief and what the North would be willing to give up in return.

Pyongyang set Washington an end-of-year deadline to offer it fresh concessions, and as it expired Kim declared the North no longer considered itself bound by its moratoriums on nuclear and intercontinental ballistic missile tests, threatening to demonstrate a “new strategic weapon” soon.

Seoul and Washington last week postponed forthcoming joint military exercises over the coronavirus outbreak — the South has nearly 5,000 infections — and President Moon Jae-in offered to co-operate over the disease with the North, which has closed its borders to try to prevent a potentially devastating outbreak.

The moves had generated “no goodwill” from the North, said Leif-Eric Easley, a professor at Ewha University in Seoul, which was made clear “it will continue to improve military capabilities and make outsized demands, despite the political and public health preoccupations of Beijing, Seoul, and Washington”.

Nonetheless, Tuesday’s KCNA report made no mention of the US nor South Korea, and Ahn Chan-il, a defector and researcher in Seoul, said the drill may have been aimed at a domestic audience after the dismissal of two top Workers’ Party officials last week.

“Aside from putting pressure on the US, the launch is to deliberately stoke sentiment within its domestic sphere for political purposes,” Ahn told AFP.