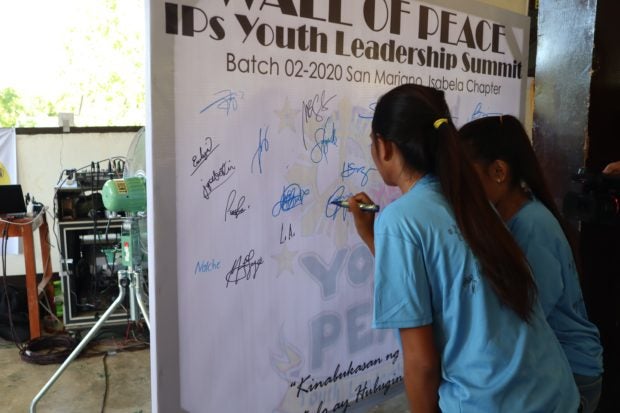 At least 89 Agta youth leaders in San Mariano town in Isabela province sign the manifesto of support for peace and development shortly after graduating from the three-day Youth Leadership Summit organized by the Philippine Army’s 95th Infantry Battalion of the 5th Infantry Division. (Photo by Villamor Visaya Jr.)

Calilan said the program aimed to make the Agta youth more “responsible, productive, and well-informed” members of the society,

The youth leaders finished the training during their graduation rites at the Enlisted Personnel Clubhouse inside this camp at Barangay Upi in Gamu town.

“The training has empowered them to be advocates and conduits of peace and development, make them aware of the propaganda of the communists and avoid being recruited by the CPP-NPA-NDF’s (Communist Party of the Philippines-New People’s Army-National Democratic Front) deceptive acts,” said Calilan, adding that camaraderie and teamwork were also developed during the seminar.

“As youth trainees today, we are hoping to be leaders in the future,” Andana told Inquirer.

Susana Soriano, training facilitator of the National Commission on Indigenous Peoples-San Mariano, said the youth leaders were chosen to undergo training “because they are being prepared to be nation builders in the future.”/lzb