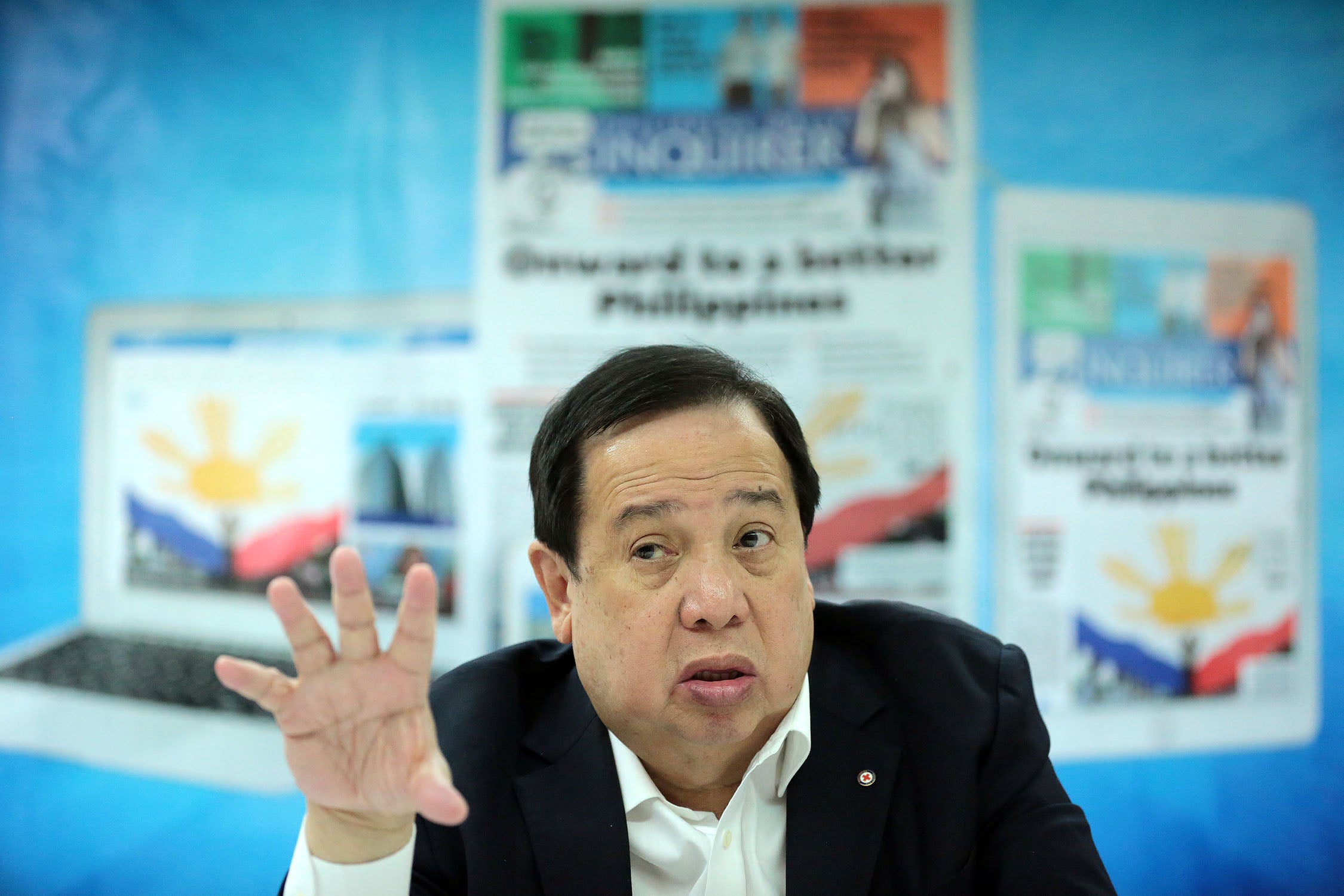 SO MUCH CASH The Senate blue ribbon committee headed by Sen. Richard Gordon may soon open a probe into the suspiciously large amount of money brought into the
country by a few dozen Chinese citizens over a two-month period. —RICHARD A. REYES / GRIG C. MONTEGRANDE

Dozens of Chinese citizens brought more than $160 million in cash into the country from December 2019 to February this year in an apparent money-laundering scheme being tolerated by the authorities, Sen. Richard Gordon revealed on Thursday.

Gordon, chair of the Senate blue ribbon committee, said he would launch a legislative inquiry into the matter as he took to task the Anti-Money Laundering Council (AMLC) for its supposed failure to prevent foreigners from cleaning dirty money through the country’s financial system.

Chinese citizens, some of whom individually carried as much as $5 million in cash, declared the money when they flew into the country from Dec. 17, 2019, to Feb. 12.

Citing records from the Bureau of Customs (BOC), Gordon said the total was an “inordinate amount of money” that entered the country in such a short period.

“Definitely, this is money laundering. It’s tragic that we have (enacted) an antimoney laundering law, but our country is used by other people,” Gordon said in a meeting with Inquirer reporters and editors.

“This is very alarming. So many foreigners are coming into the country with this huge amount of money,” he said.

According to a BOC document, most of the Chinese citizens flew in from Hong Kong and claimed that they would be using the money for “travel and casino” while others listed “investment” as reason for bringing in large amounts of cash.

The BOC list accounted for about $160.58 million (about P8.19 billion) brought in by Chinese individuals. There were non-Chinese travelers from Singapore who declared more than $25 million, also during the same period.

“With that kind of money, you can pay a lot of people, give them arms and take over our country. You have a fifth column right here (inside our country),” Gordon said. “You can say I’m alarmist, but that’s a fifth column.”

The term “fifth column,” which originated in the Spanish Civil War, refers to a group of people secretly working for the enemy.

The Bangko Sentral ng Pilipinas (BSP) Circular No. 507 issued in January 2006 requires residents or nonresidents who carry more than $10,000, or their equivalent in other foreign currencies, into or out of the country to disclose to the BOC the source and purpose of the funds, along with their personal information.

Travelers who do not declare the money they were carrying above that threshold amount shall be fined P50,000 to P200,000, or imprisoned from two to 10 years under Republic Act No. 7653, or the New Central Bank Act. Under the customs law, the undeclared amounts also would be confiscated by the government.

Asked by the Inquirer to respond to Gordon’s statements, AMLC chief and BSP Gov. Benjamin Diokno, said: “No comment.” Gordon said the “pastillas operations” at the airports, which was unraveled during Senate hearings opened by Sen. Risa Hontiveros last week, was just the “tip of the iceberg.”

Hontiveros’ investigation of the racket, allegedly carried out by corrupt immigration officers who facilitated the entry of Chinese citizens in exchange for P10,000 in “service fee,” prompted President Duterte to sack several officials of the Bureau of Immigration.

She estimated that up to P10 billion was collected by corrupt immigration officers since 2016.

Gordon said the AMLC should be more proactive in guarding against individuals who were bringing in huge sums from abroad for suspicious reasons.

“For me, the AMLC must investigate right away. What is the AMLC doing? That’s where you can tell that there’s really tolerance,” the senator said.

He said BOC personnel should have also notified the authorities that Chinese citizens had been transporting big amounts of cash since the money could eventually end up in local circulation.

Foreigners bringing in millions of dollars in cash, he said, was “suspicious” enough to merit questioning from customs officers manning the airports.

“We should ask the AMLC what they have done. What’s going on? Just because you are into the casino business, can you bring all these money?” Gordon said.

He believes the amount of money brought in by the Chinese was much more than what the BOC had recorded.

Gordon said immigration records showed that 4,850 Chinese flew in from Wuhan, the epicenter of the new coronavirus epidemic.

Since Mr. Duterte was sworn into office in 2016, the arrivals of Chinese tourists reached an unprecedented number as Philippine offshore gaming operators (Pogos) started mushrooming in Metro Manila and nearby provinces.

A majority of the Chinese travelers work in Pogos and their entry into the country had created opportunities for illegal activities, such as the “pastillas” bribery scheme.

Gordon said the number of Chinese citizens in the country should be a cause of concern for the government as they could be members of the “Chinese militia.”

Asked if he thought that many of the Chinese Pogo workers were military personnel, he said: “I think so. I will always assume the worst.” —WITH REPORTS FROM BEN DE VERA AND INQUIRER RESEARCH