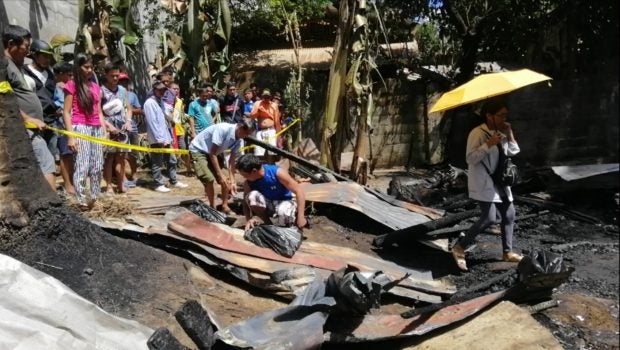 Bimbo Versoza digs through what was left of his house to collect the remains of his three children who burned to their deaths inside. LEAH AGONOY

DUMALINAO, ZAMBOANGA DEL SUR—-Three children locked inside the family home at a village here were killed in a fire that gutted their house on Thursday (Feb. 27).

The children were aged seven, four and three years old. Two elder brothers were not around when the fire struck. One was fetching water while the other was at work.

Their father, Bimbo Vetsoza, was in Pagadian City where he is a construction worker. Their mother is an Overseas Filipino Worker who had just returned to work abroad two months ago.

Gregoria Dunal, who lives in an adjacent house, said she heard children crying and when she checked, she saw the kitchen of her neighbor’s house already on fire.

Dunal immediately asked for help from other neighbors but the fire spread fast to other parts of the house.

The house’s door was locked, hindering neighbors from taking the three children out before the fire consumed them.

Fire Marshall Chief Dionisio Cayudong Jr. said the cause of the fire was still being investigated.

But Cayudong said he suspected that since the house had no electrical connection, one of the children could have played with match sticks.