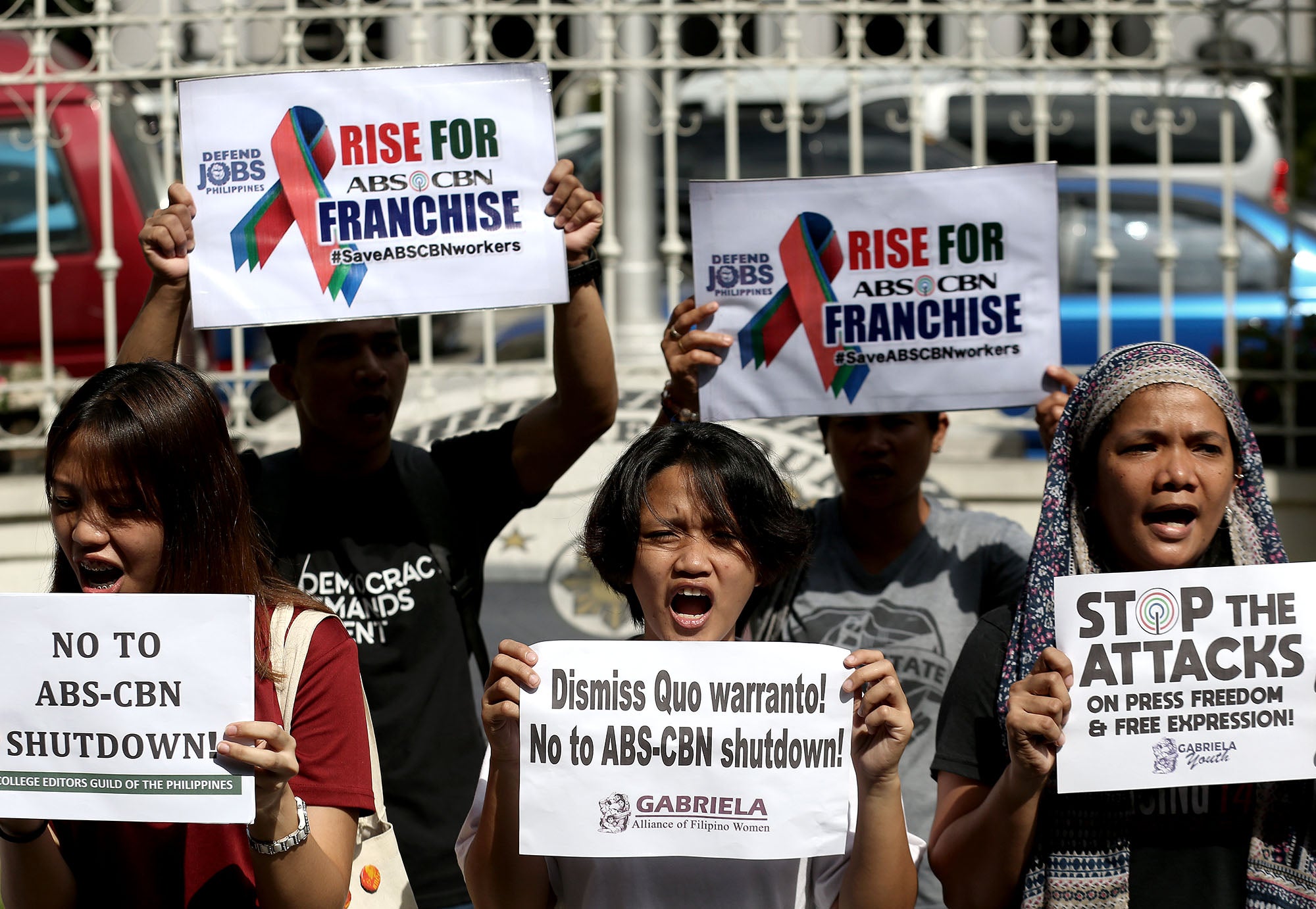 ‘DEFEND JOBS’ Militant organizations, including the feminist group Gabriela, join calls for the renewal of the ABS-CBN franchise and the dismissal of the quo warranto petition filed against the network by Solicitor General Jose Calida, in a rally outside the Supreme Court compound in Manila on Wednesday.—RICHARD A. REYES

MANILA, Philippines — President Rodrigo Duterte on Wednesday said he was accepting the apology of ABS-CBN for his personal grievances against the media network, vowing not to interfere with its pending franchise renewal in Congress.

“Yes, I accept the apology,” he told reporters in a chance interview at Malacañang.

At a Senate hearing on Monday, ABS-CBN Corp. president and CEO Carlo Katigbak said sorry to the President for airing an advertisement critical of him and for failing to air his provincial and regional political commercials during the 2016 presidential campaign.

“We felt we were just abiding by the laws and regulations that surround the airing of political ads,” Katigbak said.

Asked about ABS-CBN’s offer to return his campaign’s P2.6-million payment for unaired ad placements, Duterte said he’d “rather not” take it back.

“They could just give it to any charitable institution of their choice,” he said.

Duterte had castigated the network repeatedly for not airing some of his political advertisements when he was still running for President, while airing an ad placed by then Sen. Antonio Trillanes IV attacking him.

At the Senate hearing, Katigbak explained that Duterte’s ads had been placed too late.

He said ABS-CBN returned some P4 million to Duterte for the unaired ads but was delayed in refunding the remaining P2.6 million.

The President assured the broadcast giant that he had not spoken to any lawmaker from the House of Representatives to block its application to extend the 25-year license.

“There are about [300] of them — you can ask anybody, and if there’s a congressman who says [I spoke to them], I will resign. I never told anybody, I never spoke to anybody,” the President said.

He insisted that only Congress had the power to grant or deny ABS-CBN’s franchise.

“All of these things must originate from the House. Forget all this hullabaloo. The critical move is on the House. And I tell you I’m not going to interfere,” the President said.

But Duterte did not make any promises of signing the franchise into law, should it finally reach his office.

He had previously threatened to veto any measure extending ABS-CBN’s license.

“I will cross the bridge when I get there. Maybe I will call the media when that happens. It will be a difficult decision,” Duterte said.

ABS-CBN’s license will lapse on May 4, but the House has yet to conduct a hearing on 11 bills that would renew the TV network’s franchise.

Congress will go on recess on March 11.

Besides the apparent footdragging by the House, ABS-CBN is facing a petition filed by Solicitor General Jose Calida asking the Supreme Court to nullify the network’s soon-to-lapse franchise.

Calida claims that ABS-CBN has violated the terms of the franchise and the Constitution, charges that the media conglomerate denies.

Justice Secretary Menardo Guevarra insists that Congress can order the National Telecommunications Commission (NTC) to issue ABS-CBN a provisional permit to operate after its franchise expires, notwithstanding a Supreme Court ruling to the contrary.

“If it’s Congress itself, the sovereign power in the matter of franchise grants, which authorizes the NTC to issue a provisional permit in the interim between the expiration of the original franchise and congressional action on its renewal, who is there to question that authorization?” Guevarra said in a text message to reporters.

“As long as both houses come out with the proper resolution, whether jointly or separately, that’s sufficient affirmation for the NTC to issue a provisional authority,” the justice secretary continued.

Guevarra was expected on Wednesday to formally relay this position to the NTC, which requested a legal opinion.

Former Chief Justice Reynato Puno pointed out in an interview over CNN Philippines on Tuesday that under a Supreme Court ruling, ABS-CBN could no longer operate even under a provisional license unless it acquired a new broadcast license from Congress.

Under the Feb. 17, 2003, decision of the Supreme Court’s Third Division in Associated Communications & Wireless Services-United Broadcasting Networks versus NTC, which Puno authored, a TV station was required to have a franchise and the NTC could not grant it a provisional permit without the license.

The former chief magistrate also pointed out that under the Public Telecommunications Policy Act of 1995, NTC had no authority to issue a provisional license without a franchise from Congress.

Drilon’s concurrent resolutionCiting Guevarra’s suggestion, Senate Minority Leader Franklin Drilon on Wednesday filed a concurrent resolution expressing the sense of Congress that ABS-CBN continue to operate while the legislature debates on its franchise renewal, and urging NTC to issue a provisional authority to allow it to do so.

Drilon’s resolution noted that there were only eight session days before Congress went on recess, and the Senate and the House would need more time to deliberate on whether the network’s franchise should be renewed.

Sen. Ramon “Bong” Revilla Jr. also made his own move to help the beleaguered network, filing a bill that would extend the life of the franchise to Dec. 31, 2020.

But not all senators were sold on Drilon’s concurrent resolution.

Senate President Vicente Sotto III said he would discuss Drilon’s concurrent resolution with his colleagues, and pointed out that a similar move was not done for other franchises that had expired before renewal.

In the House, Albay Rep. Edcel Lagman questioned moves in Congress to pass a joint resolution extending the franchise of ABS-CBN, warning that these would put the network’s fate at the hands of Mr. Duterte.

“A concurrent resolution expresses the sense of the House and the Senate on a particular issue and is used for matters affecting the operations of both houses of Congress but does not have the force of a law,” he said.

In addition, he said: “If the President does not approve the joint resolution, Congress cannot override his disapproval because only bills vetoed by the President can become law if the veto is overridden by two-thirds of the members of the House as well as of the Senate.”