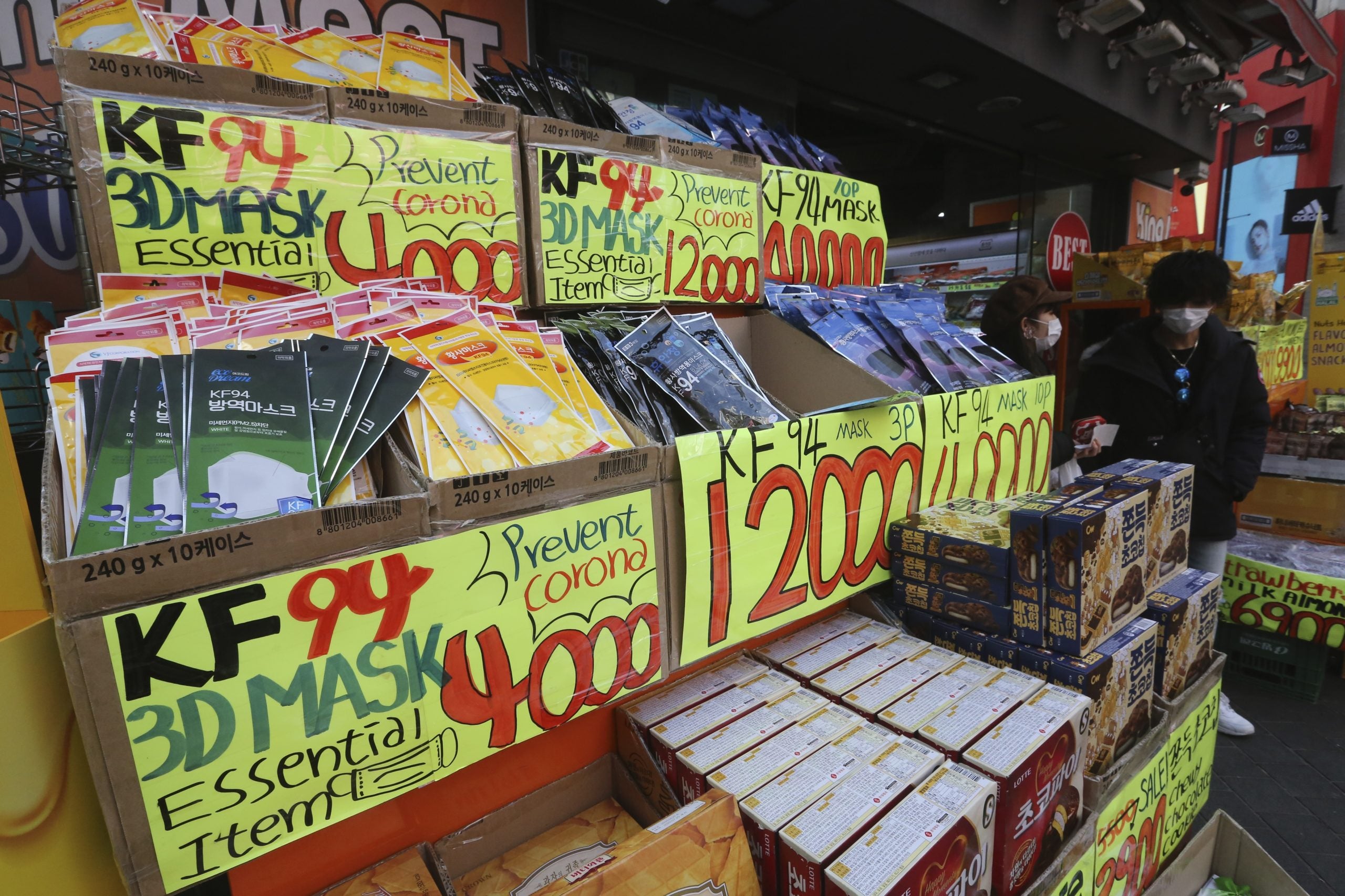 ‘ESSENTIAL ITEM’ A store in Seoul displays plenty of masks, billing them as “essential item,” on Wednesday as South Korea reports 169 new cases of the new coronavirus, raising its tally of infections to 1,146—by far the largest outside China, where the epidemic has originated. The new cases include an American soldier, the first among US service members based in South Korea. An 11th South Korean has died in the outbreak, which is centered in Daegu, the country’s fourth-largest city. —AP

BEIJING — The new coronavirus epidemic swelled on Wednesday with cases in South Korea surging past 1,000 after deaths soared in Iran and infections appeared in previously untouched countries, prompting dire warnings that the world was not ready to contain it.

The virus has rapidly spread in parts of Asia, Europe and the Middle East, even as the number of deaths and fresh cases decline at the disease epicenter in China.

Towns and cities have been sealed off in an attempt to stop the contagion, while hotels in the Canary Islands and Austria were locked down on Tuesday because of suspected cases.

In Iran, which has reported 15 deaths out of nearly 100 infections, even the country’s deputy health minister, Iraj Harirchi, said he had contracted the virus.

At the World Health Organization (WHO) headquarters in Geneva, Bruce Aylward, who headed an international expert mission to China, hailed the drastic quarantine and containment measures taken by the country.

But he told reporters that other nations were “simply not ready” to contain the outbreak.

“You have to be ready to manage this at a larger scale … and it has to be done fast,” said Aylward.

The virus has killed 2,715 people and infected over 78,000 in China. There were 52 more deaths reported on Wednesday,  the lowest in three weeks  with no fatalities outside Wuhan city, the epicenter in central Hubei province.

The National Health Commission also reported a drop in new infections to 406, with only five outside Hubei—a fi­gure that will boost confidence that the rest of the country is containing the epidemic.

The disease has now reached dozens of countries, with Austria, Croatia and Switzerland the latest to declare cases.

The epidemic’s disruption has also grown, with stock markets tumbling around the world, restrictions imposed on travelers and sporting events canceled.

The WHO, the UN health agency, has called for countries to “prepare for a potential pandemic” a term used to des­cribe an epidemic that spreads throughout the world.

Poor countries are particularly at risk, it has warned.

South Korea reported 169 new infections on Wednesday, raising its total tally to 1,146,  by far the largest outside China,  while an 11th patient died.

The vast majority  90 percent  of the new infections were in Daegu, the country’s fourth-largest city and the epicenter of the outbreak, and the neighboring province of North Gyeongsang.

The streets of Daegu, which has a population of 2.5 million,  have been largely deserted for days, apart from long queues at the few shops with masks for sale.

Authorities urged the public to exercise extra caution, advising citizens to stay home if they have a fever or respiratory symptoms.

China quarantined 94 air passengers arriving in Nanjing from Seoul after three people, all Chinese, on the flight were discovered to have fevers on Tuesday.

In the Middle East, Iran has emerged as a major hot spot, with three more people dying from the disease on Tuesday and Harirchi, the deputy health minister, confirming he had tested positive for the new coronavirus.

In a video broadcast on state television, Harirchi put on a brave face as he admitted he was infected.

“I, too, have been infected with coronavirus,” Harirchi said in the video apparently shot by himself.

“I’ve isolated myself in a place … A few minutes ago, I was told that my test was final, and now I am starting medication,” he said.

“I wanted to tell you that … we will definitely be victorious against this virus in the next few weeks,” he declared.

Iran has been scrambling to contain the epidemic since last week when it announced its first two deaths in Qom, a center for Islamic studies and pilgrims that attracts scholars from abroad.

US Secretary of State Mike Pompeo, whose country came to the brink of war with Iran earlier this year, said Washington was deeply concerned Tehran “may have suppressed vital details” about the outbreak there.

Gulf countries announced new measures to cut links with Iran in an attempt to stop the spread.

Italy,  which has reported 10 deaths and more than 300 cases,  has locked down 11 towns and ordered Serie A football games to be played to empty stadiums.

A young man who returned to Croatia from Italy became the first case in the Balkans region.

In the United States, which has a few dozen cases, health authorities urged local governments, businesses and schools to develop plans like canceling mass gatherings or switching to teleworking as the country braces for the virus to spread further.

Officials are also worried the outbreak poses a threat to the security of the US drug supply chain because a high proportion of ingredients used to make medicine is made in China.

“Ultimately, we expect we will see community spread in this country,” Nancy Messonnier, a senior official with the Centers for Disease Control and Prevention, said during a briefing on Tuesday.