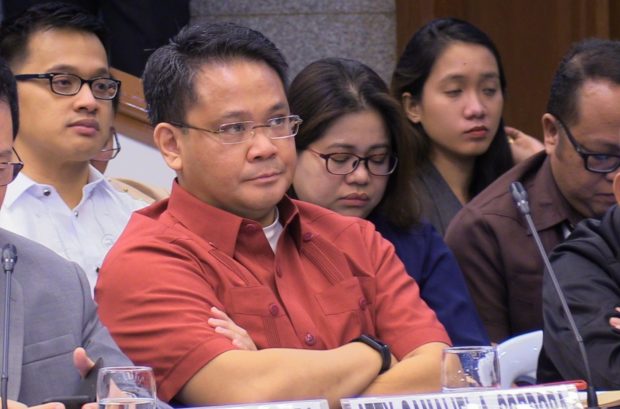 MANILA, Philippines —  ABS-CBN may be slapped with a fine of P200 per violation — not a revocation of its franchise — if indeed it continued with its pay-per-view services even without the approval of the National  Telecommunications Commission (NTC).

NTC  Commissioner Gamaliel  Cordoba himself admitted this during Monday’s hearing of the Senate Committee on Public Services, which is headed by Sen. Grace Poe.

The pay-per-view issue was among the alleged violations committed by the giant television network cited in a quo warranto petition filed at the Supreme Court by Solicitor General Jose Calida.

[Commissioner  Cordoba, let’s say ABS-CBN should hot have aired its pay-per-view, and they did it several  times… What would be the appropriate penalty? A fine? Stoppage of operation? Or the revocation of its franchise?]

“Actually your honor based on the Public Service Act, that would be just be fining po. That’s P200 per violation,” the NTC chief said.

To ensure he got the NTC right, Senate Minority  Franklin Drilon repeated Poe’s query as to the possible  liability of ABS-CBN in the pay-per-view issue.

“Just clearly and for the record, the alleged violation of the pay-per-view services in the view of the NTC is not a ground for the revocation of the franchise but only subjects  ABS-CBN — assuming that they have violated [anything] — to a fine of P200  per violation. Is that correct?” Drilon asked.

But even before this, Cordoba revealed that the Department of Justice (DOJ) had said that the pay-per-view services of ABS-CBN was covered by its franchise.

He said the NTC had sought the opinion of the DOJ on the matter — that is, if the network’s franchise was “broad enough” to include the said pay-per-view services.

[So to ensure that we would have a legal basis, we asked for an opinion, and the DOJ said  the pay-per-view can be accommodated.]

But Cordoba said the NTC was supposed to come up with implementing rules and regulations (IRR) first since some broadcasters were seeking clarification of the DOJ opinion.

He later said that ABS-CBN might have somehow violated the Constitution when it continued to offer the pay-per-view services pending the issuance of the IRR.