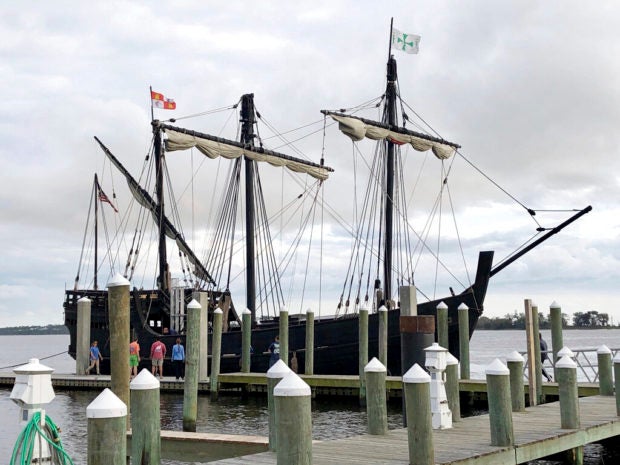 Spectators watch as a replica of one of Christopher Columbus’ ships, the Pinta, is moored, Wednesday in Biloxi, Mississippi. The Nina and Pinta replica ships are touring the Mississippi, Alabama and Florida until May. Columbus sailed across the Atlantic on the Niña on his three voyages to the New World beginning in 1492. (AP)

BILOXI, Mississippi — Replicas of Christopher Columbus’ Niña and Pinta have arrived along Mississippi’s Gulf Coast, sailing into a Biloxi harbor as spectators aimed their phones out to the horizon.

About a dozen spectators lined a pier Wednesday as the ships arrived.

Columbus used the Niña on three of his four voyages to the New World beginning in 1492.

He was long celebrated in the U.S., and is honored with a federal holiday — but in 1992, with the 500th anniversary of his first transatlantic voyage, more voices joined in the call for a reckoning with the brutal aspects of his legacy. Columbus’ arrival brought violence, disease, enslavement, racism and exploitation to the native people. Some states and cities have replaced Columbus Day with Indigenous People’s Day.

The original Niña was last heard from in 1501, but this replica, which was finished in 1991, serves as a floating museum. It was built entirely by hand, without the use of power tools, and is considered to be the most historically accurate Columbus ship replica ever built.

The Pinta replica was built in Brazil and launched in 2005 to accompany the Niña on travels. It’s a larger version of the archetypal “caravel,” the term for a Portuguese ship used by Columbus and many early explorers.

While in port, the ships will be open for public tours, beginning Thursday. They are scheduled to leave Biloxi on Monday, March 2.

After a week-long stop in Gulf Shores, Alabama, beginning March 4, the ships will head to Florida, where they have scheduled stops in Fort Walton Beach, Venice, Vero Beach and Fernandina Beach.