BEIJING  — China reported a further fall in new virus cases to 889 on Friday as health officials expressed optimism over containment of the outbreak that has caused more than 2,200 deaths and is spreading elsewhere. 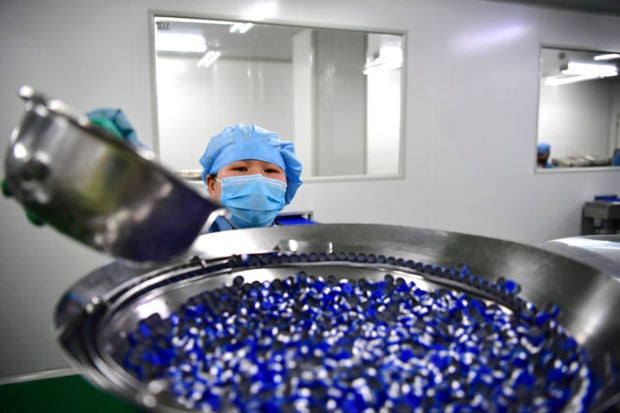 In this photo released by Xinhua News Agency, a staff member works at the workshop of Fusen Pharmaceutical Co., Ltd. in Nanyang in central China’s Henan Province, Thursday Feb. 20, 2020. The company has resumed production to ensure the supply of medicines during the fight against the novel coronavirus disease (COVID-19), with comprehensive measures taken to protect the workers. (Feng Dapeng/Xinhua via AP)

China’s figures for the previous 24 hours brought the total number of cases to 75,465.

The 118 newly reported deaths raised the total to 2,236. More than 1,000 cases and 11 deaths have been confirmed outside the mainland.

China last week had started recording new cases without waiting for laboratory results, causing a significant spike in the number of cases.

But on Thursday it returned to its prior way of counting, and removed some cases from the tally because lab tests came back negative.

The changes are sure to aggravate observers who say consistency is key to understanding COVID-19’s path.

Containment of the illness has been a struggle far from the epicenter in central China as a major South Korean city urged residents to stay indoors.

New infections in China have been falling for days, although changes in how it counts cases have caused doubts about the true trajectory of the epidemic.

“The downward trend will not be reversed,” insisted Ding Xiangyang, deputy chief secretary of the State Council and a member of the central government’s supervision group said on Thursday.