Dela Rosa to Espenido: ‘Stop talking’ or get out of PNP | Inquirer News
Close
menu
search 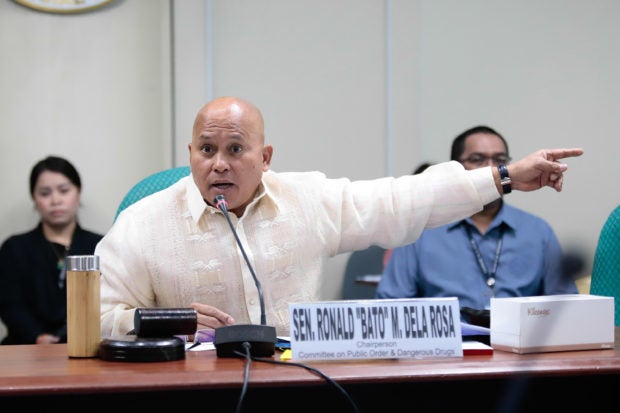 In this February 12, 2020, photo, Senator Ronald “Bato” dela Rosa, chairman of the committee on public order and dangerous drugs, presides over a public hearing at the Senate in Pasay City. (Henzberg Austria/Senate PRIB)

According to Dela Rosa, Espenido should observe proper decorum as he is still in the police force.

“Please stop talking you’re still in the PNP organization you observe what should be observed and talking indiscriminately is not observing the proper decorum,” he told reporters in an interview in Camp Crame, Quezon City.

“Otherwise, kung gusto niya magsalita nang magsalita (if he wants to keep on talking) against the PNP, lumabas siya (get out), umalis ka sa (leave the) organization,” he added.

Espenido held a press conference Wednesday expressing dismay over his inclusion in the drugs watchlist of President Rodrigo Duterte. Espenido is said to be among the 356 policemen allegedly linked in the illegal drug trade.

Also, Espenido said that his inclusion in the drugs watchlist was a failure of intelligence on the part of PNP.

But Dela Rosa vouched for Espenido’s integrity. Even Duterte said he believed Espenido was “clean” and allegations against him were “untrue.”

PNP chief Archie Gamboa earlier said Espenido will be investigated for speaking out in public about his inclusion in the government’s drug watchlist since he has issued a gag order on the 356 policemen.

Gamboa said PNP will resolve the “purely internal issue” and he will deal with Espenido squarely – him as chief PNP and Espenido as a member of the institution.

READ: After inclusion in Duterte’s ‘narcolist’, Espenido says politicians now after him

Meanwhile, the adjudication of policemen in the drug watchlist is ongoing. Gamboa said he intends to submit the results of the arbitration as well as his recommendations to Duterte by March 5.

READ: Cops in ‘narcolist’ to face Duterte’s judgment next month