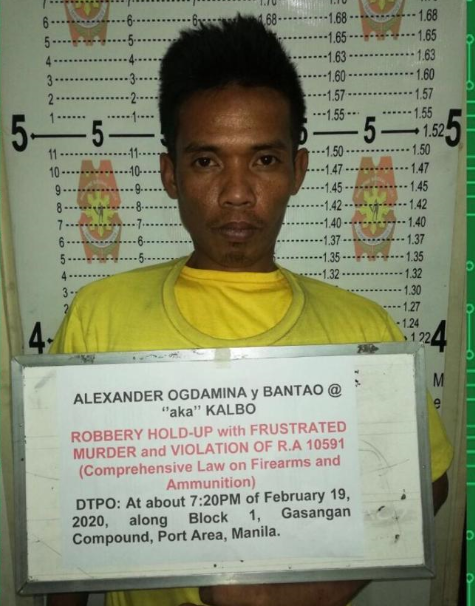 Alexander Ogdamina, who admitted to shooting a noodle vendor in Baseco Compound, Port Area, Manila, poses for a mugshot after his arrest on Wednesday, Feb. 19, 2020. A handgun and bullets were confiscated from him during his arrest. (Photo from MPD)

MANILA, Philippines — As if shooting his victim wasn’t enough, the robbery suspect who shot point blank a noodle vendor in Baseco Compound in Port Area, Manila had the cheek to blame his victim for not giving up his belongings when the suspect asked for it.

Alexander Ogdamina, in an interview with reporters following his arrest Wednesday, minced no words: he wasn’t joking when he pointed the gun to vendor Samson Bautista, who initially refused to give his bag during the robbery hold-up incident on Tuesday.

“Baka akala kasi nila sa mga tulad sa amin nagbibiro kami. Hindi kami nagbibiro. Kapag sinabi namin, ginagawa namin ‘yun (Maybe they think people like us are joking. We are not joking. If we say we will do it, we will do it),” he said.

(It was just a small amount. There is no need for a life to be lost over that… He did not give me the bag. You will see it in the CCTV.)

The suspect later on admitted he is using illegal drugs.

He later apologized to the family of the victim, who authorities said might be paralyzed due to the incident.

During the arrest, a handgun believed to have been used to shoot the victim on the neck, and five pieces of ammunition were confiscated from the suspect.

The suspect will be charged with the crime of robbery with frustrated murder, and illegal possession of a firearm and ammunition, according to police.

But what should really be done when someone declares a robbery?

Philippine National Police spokesperson Brig. Gen. Bernard Banac advised that victims should remain calm and to not resist during this kind of situation.

Instead of resisting, Banac said victims should follow the robber’s instructions, but should not offer more than what the latter asked for.

“Take note of your personal safety. Take note of his appearance and what he does so you can include it in your report. Right after the incident, immediately seek help and report the crime to police for immediate action or response,” the police official said.