MANILA, Philippines — President Rodrigo Duterte has relieved all officials and employees of the Bureau of Immigration (BI) who are allegedly involved in the so-called “pastillas” scheme at the airport.

The modus, which was exposed by opposition Senator Risa Hontiveros in a Senate hearing early this week, purportedly involves airport and immigration personnel who supposedly receive kickbacks in exchange for the seamless entry of Chinese people into the country.

Presidential spokesman Salvador Panelo made the announcement on the relief of the immigration officials and personnel on Thursday during a Palace briefing.

“The President considers this anomaly, which some define as the ‘pastillas scheme’, as a grave form of corruption that cannot be countenanced by the government,” Panelo said.

“As we have repeatedly stressed, there are no sacred cows in this Administration. Any official or employee who commits any wrong in the performance of their respective duties shall be meted out with the punishment that they deserve and in accordance with our penal laws,” he added. 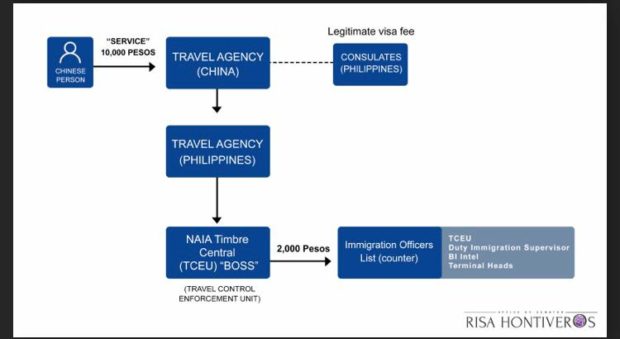 The so-called “Pastillas” modus at the airport

Panelo also said that the present situation in the immigration bureau, “as well as how it is being run by Commissioner Jaime Morente”, will be taken up in the next Cabinet meeting.

The Palace official said the President received reports about the purported scheme and “found probable cause” to order the sacking of the BI officials and personnel involved.

It is unclear how many officials and employees will be affected by the President’s order.

During a recent Senate inquiry on crimes involving Philippine overseas gaming operators (Pogo), Hontiveros bared the “pastillas” scam, which she said could very well have reached a total of P10 billion.

Under the “pastillas” operation, an arriving Chinese reportedly shells out a P10,000 service fee, of which P2,000 will be divided among officials of the BI’s Travel Control and Enforcement Unit, duty Immigration supervisor, and terminal heads. The rest of the amount will be given to tour operators and syndicates who will transport the Chinese from the airport to facilities of Philippine offshore gaming operations.

The scheme was called “pastillas” supposedly because the bribe money would be rolled in a bond paper like the wrapping of the Filipino milk candy.