MANILA, Philippines — Former and incumbent senators on Thursday blamed what one called a “serious constitutional defect” that allowed the unilateral abrogation of the Visiting Forces Agreement (VFA) with the United States.

On February 11, President Rodrigo Duterte unilaterally terminated the VFA after the US revoked the visa of his close ally, Senator Ronald “Bato” dela Rosa.

Senate Minority Leader Franklin Drilon, and former senators Franciso “Kit” Tatad and Rodolfo Baizon said that while Senate concurrence is needed in any treaty or international agreement, they recognized that the Constitution was silent on treaty withdrawal.

“It is true that treaty-withdrawal power is not in the Constitution. It is only treaty-making,” Drilon said at the start of the hearing of the Senate committee on foreign relations.

“However, the legal scholars in the United States have put forward that theory that we should apply the mirror principle. It simply says that ‘the degree of congressional participation constitutionally required to exit any particular agreement should mirror the degree of congressional participation that is required to enter into an agreement in the first place’.”

“In other words, the process of withdrawal should mirror the same process in accession to the treaty. That is why it mirrors the procedure,” Drilon also said. 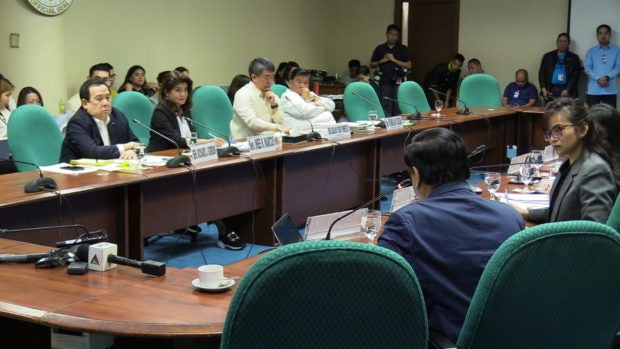 Senators Richard Gordon, Imee Marcos, Aquilino Pimentel III, and Senate Minority Floor Leader Franklin Drilon listen during the Senate hearing the Senate inquiry on the need for the Senate’s concurrence on the withdrawal or termination of treaties entered into by the Philippines on Thursday, February 20, 2020, at the Senate. INQUIRER.NET PHOTO/CATHY MIRANDA

For Tatad, the absence of a specific provision in the Constitution on treaty withdrawal was a “serious constitutional lapse.”

“The Constitution is silent on this. Whether this was a plain oversight or a deliberate act on the part of the framers of the Constitution, we have a serious constitutional lapse, which we must correct,” he said during the hearing.

He said the “surest” way to correct this defect is to amend the Constitution.

He also insisted that since the President cannot have a valid treaty without the Senate, he should not also be able to abrogate it without the same concurrence by the upper chamber. 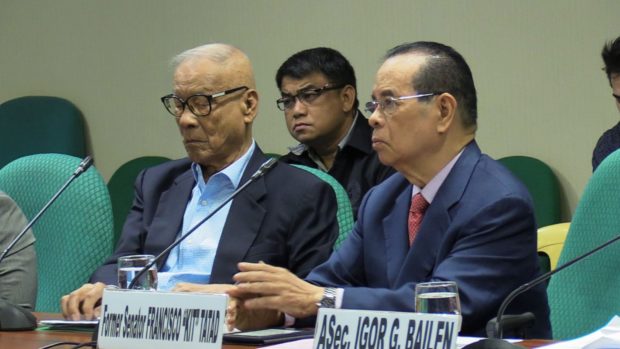 Former Senators Rodolfo Biazon (L) and Kit Tatad attend the Senate inquiry on the need for the upper chamber’s concurrence on the withdrawal or termination of treaties entered into by the Philippines on Thursday, February 20, 2020, at the Senate. INQUIRER.NET PHOTO/CATHY MIRANDA

Biazon echoed Drilon and Tatad’s position, noting that a provision on treaty withdrawal was indeed nowhere in the Constitution.

“Unfortunately, our [Constitution], is silent on the issue of termination of any treaty. It’s silent,” he said.

“And I agree that the only way to resolve the question is through the Supreme Court and so, therefore, there will be a second case to be filed before the SC questioning the unilateral exercise of the power to terminate treaties. Pupunta ho ‘yun sa (It would go to the) Supreme Court,” he added.

Biazon said he would join the move to elevate the issue before the SC.

Senate President Vicente “Tito” Sotto III earlier said he and Senators Drilon, Panfilo Lacson and Richard Gordon, Biazon, and Tatad are planning to file a petition at the high court.