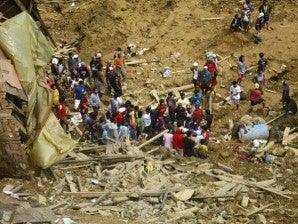 MINING DISASTER. In this photo released by the Philippine Army, residents dig through the rubble following a landslide that occurred at the small-scale mining community of Pantukan, Compostela Valley, in southern Philippines Thursday, Jan. 5, 2012. The landslide occurred months after government officials warned miners that the mountain above them was guaranteed to crumble. AP/PHILIPPINE ARMY, SENIOR POLICE OFFICER 1 ROGER MONTEJO

PANTUKAN, Philippines—At least 25 people were killed in the southern Philippines on Thursday when a landslide buried gold prospectors who had refused to leave an area declared too dangerous for habitation.

Officials said up to 150 people were missing on Mindanao island after the collapse of a rain-soaked hillside that had been settled by thousands of migrants in search of instant riches.

Rescuers using hand-held tools pulled 25 bodies and 15 injured residents from the rubble after the dawn landslide in Napnapan, a hamlet of more than 8,000 people near the town of Pantukan, civil defense chief Benito Ramos told AFP.

“A military unit is in the area but they are basically digging with their hands,” he told AFP.

The National Disaster Risk Reduction and Management Council said 150 people were missing and that the health department was transporting 150 body bags to the site, even as heavy rain halted rescue efforts for the rest of the day.

Local military official Colonel Lyndon Paniza, who is coordinating the rescue from Pantukan, about two hours away via rugged mountain roads, said rescuers fear there could be more fatalities.

“We expect many were killed since the worst-hit was the middle, where there are more than 50 shanties,” he told AFP.

The provincial government and local mining firms have been asked to bring heavy equipment to the village.

Pantukan and nearby Monkayo, both on the west flank of Mindanao’s Pacific Cordilleras mountains, have drawn gold prospectors for years despite frequent, deadly landslides.

Their largely unregulated tunneling have made the mountainside unstable, government experts say, while officials also said a 2.8-magnitude quake that hit the area about three hours earlier could have triggered the disaster.

Paniza said another landslide had occurred about two kilometers (just over a mile) away on April 22 last year.

Local officials said that landslide had killed 14 people, while another in 2009 killed 26.

Aerial photographs released by the army showed an expanse of brown mud crushing wooden homes and vehicles, as rescuers scrambled down dangerous, near-vertical slopes to search the rubble.

Mines and Geosciences Bureau head Leo Jasareno said miners had been told to leave the area as early as 2008, but local officials failed to enforce the ban.

“That place is full of tension cracks. Geologically, the stones beneath were really fractured,” Jasareno said over ABS-CBN television.

He said the ground had been saturated, with heavy rains from a storm off Mindanao’s southeast coast soaking the peaks over the past two weeks.

“We classify this as rain-induced, although structures built on the mountain aggravated the problem,” Jasareno said.

“These are small-scale miners who tunnel into the side of the mountains like rats,” Ramos told AFP.

“It’s obvious that the gold attracts them. We cannot guard the mountain 24/7 because we have other responsibilities.”

The Philippines has some of the world’s biggest gold, copper and nickel deposits, according to expert estimates, but most of these have remained off-limits to big mining firms partly due to local opposition.

The situation has let in individuals or small-scale ventures that simply start digging on slopes and process ore using antiquated and dangerous methods.

The environment department estimates that 70 percent of all gold in the country is produced by small-scale miners, many of them in areas like Pantukan.