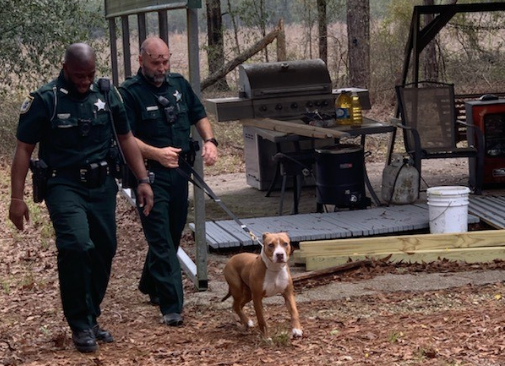 A 3-year-old boy in Florida, United States, wandered away and got lost in the woods, but the family dog stayed with him and protected him until help arrived.

The boy’s mother called 911 and said her son was playing with his siblings when he roamed away, according to the Suwannee County Sheriff’s Office on Tuesday, Feb. 18.

“Earlier this afternoon the Suwannee County Sheriff’s Office Telecommunications Center received a 911 call from a frantic mother whose 3-year-old son was playing outside with his siblings and wandered away,” the sheriff’s office said. “The mother told the Dispatcher that the family’s dog, Buddy, was also missing, and presumed to be with the child.”

As per the sheriff’s office, patrol deputies and investigators arrived at the scene with K9 units to search for the lost boy. Moments later, however, a neighbor of the family dialed 911 after spotting a child and a dog in the woods.

“A short while later, a nearby neighbor called 911 and stated that he located a small child and dog in the woods, but the dog wouldn’t let him get near the child,” they said.

The sheriff’s office shared photos in its post, one showing the young boy  in the arms of one of the officers. In the second photo, another officer can be seen handling the dog with a leash, which appears to be a pit bull. The post has since garnered 58,000 reactions on Facebook, as of this writing, with over 6,000 comments and 52,000 shares.

In the end, the sheriff’s office commended the neighbor for being alert and the family dog, who they called “man’s best friend.”

“Fortunately we were able to reunite the child with his mother, thanks in part to ‘man’s best friend’ and an alert neighbor,” the sheriff’s office said.  /ra