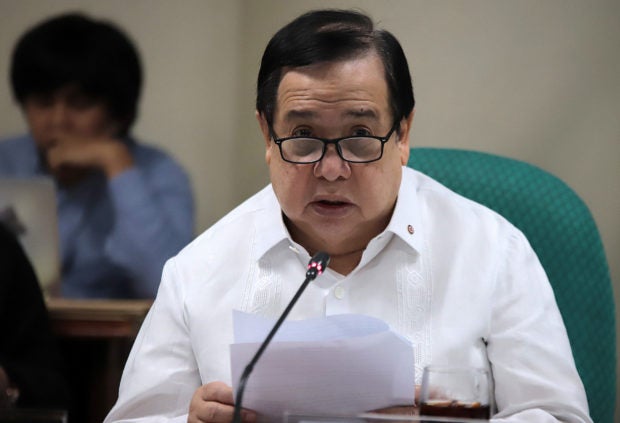 MANILA, Philippines — Sen. Richard Gordon lamented the “culture of killing” that allowed the killing of 15 officials of the Bureau of Corrections (BuCor) since 2011 — the latest being lawyer Frederic Santos.

“This has been going on in our country,” he said of the killings. “Hello? Can we all wake up to this?”

“[From] 2011 to the present, he’s the 15th [official] killed outside of the Muntinlupa [meaning, the New Bilibid Prison] within the gates and outside the gates,” Gordon, speaking partly in Filipino, told reporters in an interview on Wednesday.

“This culture of killing against people who may have testified, who may have knowledge of crimes, is a threat upon everybody,” he added.

“These people really have no fear. It is a rubout. It is a warning to all in this country that if you know something and then talk ‘We can kill you.’ Why?  All of these people who are killed in Muntinlupa, their cases remain unsolved. I have yet to know of a solved case,” Gordon said.

The senator then called for the “immediate” resolution of the case and underscored the need for protecting witnesses.

“This is a very sensitive case,” he went on. “Maybe we really dig deep into these cases of people being released, big money is involved. Maybe that’s why the Ombudsman already suspended several BuCor officials. I think even [Santos] was also suspended. Maybe he will become a state witness. Those behind this are afraid that’s why they got rid of him.”

“We should protect our witnesses. Otherwise, nobody is safe,” he added.

During the Senate inquiry in September 2019, Sen. Panfilo Lacson said he had received reports that Santos used to hold drug sessions with Chinese drug lords in Building 14 of the NBP, where high-profile inmates are detained.

Santos had then denied Lacson’s accusation.

During the marathon hearings, Santos also confessed that wardens and convicts covered up each other’s activities.

He said prison guards would not punish inmates caught using mobile phones and in possession of other contraband in their detention cells and would instead opt for a settlement.

In the same month, the Office of the Ombudsman ordered the six-month preventive suspension of Santos and 29 other BuCor officials over the questionable release of convicted inmates in the New Bilibid Prison under the GCTA policy.

Specifically, the Ombudsman ordered Santos suspended without pay while facing administrative investigation for alleged grave misconduct, gross neglect of duty, and conduct prejudicial to the best interest of the service.