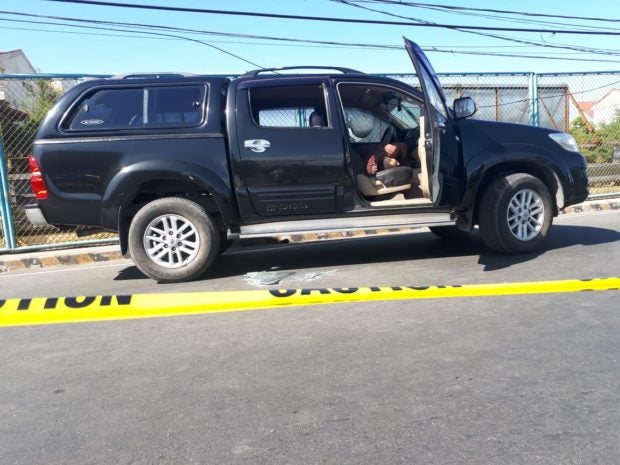 MANILA, Philippines — The Bureau of Corrections’ legal service chief was gunned down in Muntinlupa City on Wednesday.

Fredric Anthony Santos was aboard a Toyota Hilux when two gunmen appeared and shot him in front of a school along Katihan Street in Barangay Poblacion at 1:50 p.m., according to a report from the Muntinlupa City police.

Police said Santos was to fetch his daughter from the school when the incident happened.

He sustained gunshot wounds in the head and was declared dead on the spot.

The suspects then fled towards an unknown direction, police added.

Santos was one of those invited in the Senate last year to testify about purported irregularities in BuCor, particularly on the controversial Good Conduct Time Allowance (GCTA) law, which reduces prison sentence of convicts based on good conduct while serving jail time.

Senate President Vicente Sotto III, in a text message to INQUIRER.net, confirmed that Santos had initially wanted to reveal more information about the issue.

“Yes, but [he] did not,” he said when asked if the BuCor official expressed intention to disclose more details about the supposed irregularities on the implementation of the GCTA prior to his death.

Sotto said this happened at the time when hearings were being conducted. He added there was “nothing lately” that Santos had wanted to reveal to senators.

In September 2019, Sen. Panfilo Lacson said in a Senate hearing that he received reports that Santos used to hold drug sessions with Chinese drug lords at the New Bilibid Prison’s Building 14 where high-profile inmates are detained.

During the Senate investigation, Santos also confessed that wardens and convicts cover each other’s activities. For instance, he said, prison guards would not punish inmates caught using mobile phones and in possession of other contraband inside their detention cells and would instead opt for a settlement.

Also in September 2019, the Office of the Ombudsman ordered the six-month preventive suspension of Santos and 29 other officials of BuCor over the questionable release of convicted inmates in the New Bilibid Prison under the Good Conduct Time Allowance policy.

Specifically, the Ombudsman has ordered Santos suspended without pay while facing administrative investigation for alleged grave misconduct, gross neglect of duty, and conduct prejudicial to the best interest of the service.