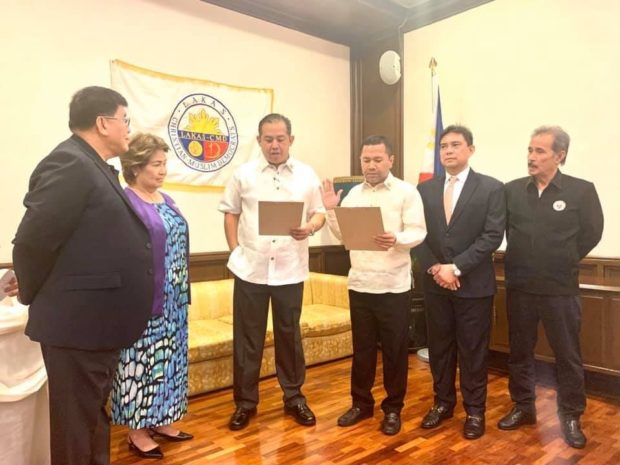 PDP-Laban loses another member in the House of Representatives as Biliran Rep. Gerryboy Espina takes his oath as member of Lakas-CMD. Photo from Office of House Majority Leader Martin Romualdez

MANILA,  Philippines  — The Partido Demokratiko Pilipino–Lakas ng Bayan (PDP-Laban) which is led by President Rodrigo Duterte is further down in numbers in the House of Representatives after one of its members transferred to the Lakas-Christian Muslim Democrats (CMD) party.

The move has increased Lakas-CMD’s number in the lower chamber to 30. Of this number, 15 lawmakers are congressional district lawmakers while the remaining 15 are party-list lawmakers.

“We will continue to solidify and strengthen our political influence nationwide,” Romualdez said during the oath-taking ceremony at the Batasan Pambansa Complex.

Romualdez, president of Lakas-CMD, said his party “remains and will always be a partner of the administration.”

The move increased NUP’s number in the House to 62, including the presidential son and Davao City Rep. Paolo Duterte who is an adopted member of the party.