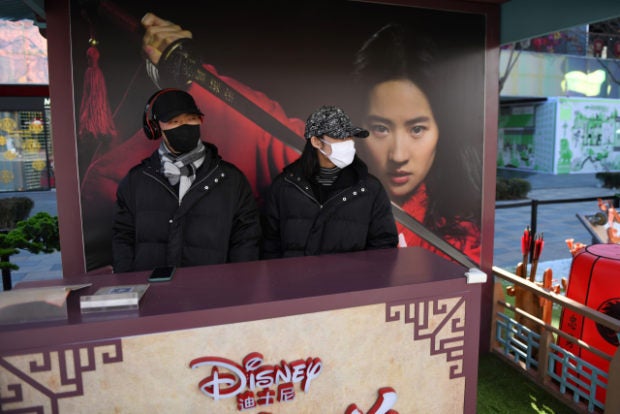 On a Friday night in one of Beijing’s central shopping districts, the popular Megabox cinema is shuttered and empty.

Like entertainment venues across the capital, the eight-screen movie theater has been closed for nearly a month in response to the coronavirus outbreak which has swept China, infecting more than 70,000 people.

Glossy posters for this year’s blockbusters hang inside the closed entrance, while a sign outside says it was closed to “avoid spreading infections.”

No reopening date was given.

The government told hundreds of millions of people to stay home through the Lunar New Year holiday — a crucial period in China’s movie industry.

Normally, blockbuster films are released and consumers pack cinemas — but this year, all was quiet.

The closures could have a devastating impact on China’s film industry — and its target to overtake the United States this year as the biggest box office in the world.

With sales decimated in the first two months of the year, this now looks unlikely.

“Based on 2019, the contribution from Chinese New Year was about 20 to 30% of the total box office,” said Wilson Chow, head of PwC’s global technology, media and entertainment and telecommunications practice.

“It is really a big portion.”

The takings at the box office on the first day of the new year in 2019 was $240 million, according to Chow.

“I’m not very optimistic (of overtaking U.S. sales this year),” he said, describing the virus as “a big blow to the industry.”

Film groups in China are only beginning to count the cost.

This year, cinemas have closed and films the group has produced are postponed.

She says only 117,000 people went to the cinema during the first few days of the holiday — compared with 130 million last year.

Shares in Shenzhen-listed Wanda Film have tumbled by more 25% since mid-January, with Hong Kong-listed iMax China down over 16%.

Chow warned older or less successful cinemas might be forced to close permanently.

The outbreak could also hit the pipeline.

Beijing’s Film Bureau promised to give financial support to production companies hit by the outbreak.

The loss of lucrative Chinese audiences will have a global impact.

According to state agency Xinhua, more than 40 non-domestic made films last year had box office sales over 100 million yuan ($14 million).

The virus has also caused waves in China’s film circles.

One anticipated blockbuster, “Lost In Russia”, was set to be released during the new year holiday — but the film studio, Huanxi Media, decided to release the film online instead of waiting for cinemas to reopen.

The studio signed a partnership to screen it for free with internet firm Bytedance, which paid Huanxi a one-time fee of $90 million to release it on its Douyin and Toutiao platforms.

The move was popular with those trapped at home, but prompted a huge backlash from cinemas.

It claimed the agreement was “intentionally destroying the movie industry.”

The streaming giants have had an unexpected hit from the locked-down holiday, with shares surging for the likes of Baidu’s Nasdaq-listed iQiyi and Bilibili.

iQiyi said it has brought forward the release of new programs and released VIP films for free viewing during the holiday.

Meanwhile, others remain in limbo. Disney was hoping its new film Mulan — based on the tale of a legendary Chinese warrior — would be a huge hit with Chinese audiences.

Now the U.S. entertainment giant, which will also face losses from closing its Disneyland parks in China and Hong Kong, can not even be sure when the film will open.

Even the Oscar awards felt the coronavirus impact.

But the film’s co-producer and the factory’s chairman were unable to leave China for the ceremony — due to U.S. travel restrictions over the coronavirus. RGA